TfW have marked a major milestone in the South Wales Metro project with the installation of the first electrical lines on the Core Valley Lines in South Wales. 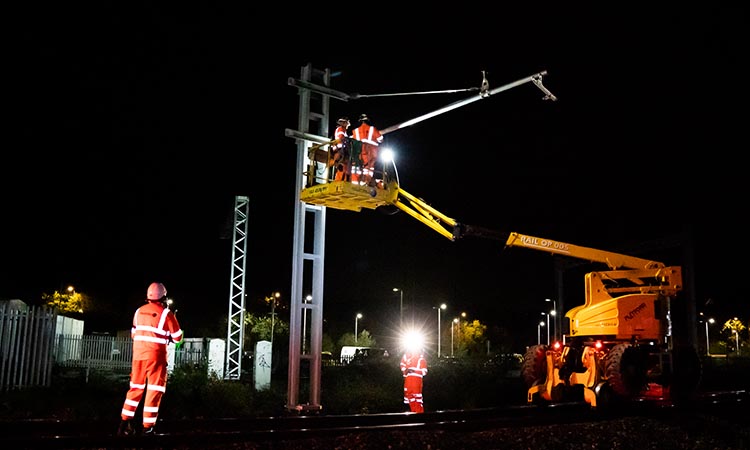 The first electrical lines that will power the new South Wales Metro have been installed by Transport for Wales on the Core Valley Lines in South Wales. This is another major milestone in the delivery of the Metro project that will transform travel for the people of South Wales providing faster, more frequent, and greener transport.

With electrification work ongoing over the coming months, TfW is urging the public to obey trespassing rules and to stay clear of any electrical lines. Trespassing on the railway is reckless, illegal and dangerous, and those caught could face a £1000 fine.

The Overhead Line Equipment (OLE) will consist of metal posts and wires and will be seen along the railway track within the valleys.  TfW will be installing OLE on 170km of track across the Core Valleys Lines (Treherbert, Aberdare, Merthyr, Rhymney, Coryton, Bay and City Lines) and the steel posts will be mounted upon foundations spaced between 20 and 65 metres apart along the length of the track.

“Installation of the first electrical lines is a major step forward for us at TfW and once completed, this programme of works will provide greener transport for the future,” Leyton Powell, Director of Safety and Sustainability for TfW, said “However, it’s fundamental that we highlight that electrification work is now underway and therefore the public must understand the risks and dangers.  As always, trespassing on the railway is dangerous and it’s important that people obey the rules as they are for their own safety.”

“As police officers, we see – all too often – the devastating impact of people trespassing on railway tracks,” Sgt Tomos Van Praet, Officer from the British Transport Police, said. “Every time someone steps onto the track they are putting themselves at risk of serious, life-changing injury.”

The South Wales Metro will significantly improve connectivity throughout South Wales and provide access to jobs, leisure, and other opportunities for the people of Wales, through unifying rail, bus and active travel routes. The project has been part-funded by the European Regional Development Fund through Welsh Government.