Alstom’s Pendolino, the first high-speed train to operate in Poland, entered in service… 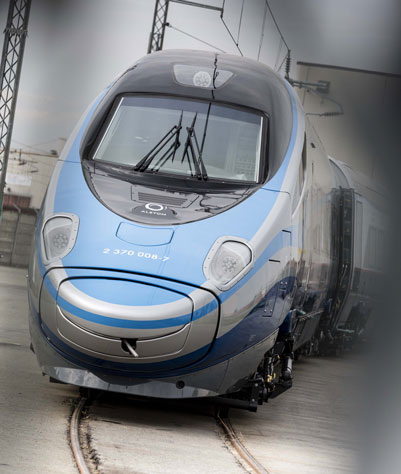 Alstom’s Pendolino, the first high-speed train to operate in Poland, entered in service today. This inauguration opens a new era for railway travels in Poland, offering passengers enhanced comfort, safety, new standards and shorter travel time between the northern and the southern parts of the country. The Pendolino trains will be operated on existing lines by PKP Intercity1 to connect the main cities of Warsaw, Gdansk, Gdynia, Krakow, Katowice and Wroclaw. The PKP Pendolino has seven cars and can carry up to 402 people in three classes: first, second, and dedicated close compartments for families. The cars are all equipped with air conditioning, passenger information on LED screens, table and sockets for each passenger, high luggage capacity, and bicycle storage. Other services provided on the trains are a wide restauration area with bar and tables, and universal accessibility including external elevator and a wide toilet accessible on wheelchair. In cooperation with Alstom’s Design & Styling center, the Polish designer maradDesign has created the graphic design and colors, and the Italian designer Giorgetto Giugiaro has conceived the aerodynamic front end that covers the crash absorption system.

“With this commissioning, Alstom confirms its expertise in the high-speed sector and the success of one of the best-seller high-speed trains in the world, the Pendolino, which has been optimised to fit the needs of the country’s railway network. Alstom is proud to take part in this breakthrough in the history of Polish railways” said Andreas Knitter, Alstom Transport Senior Vice President Europe.

This commissioning follows the contract worth € 665 million awarded by PKP Intercity in 2011 to supply 20 high speed trains, the full maintenance of the fleet for up to 17 years and the construction of a maintenance depot, in Warsaw. The 12 000 m2 newly-built depot is equipped with the most high-tech servicing tools. Alstom employs today 92 people in the depot. This figure will reach 130 at full capacity.

In September 2014, the Polish Office of Rail Transport, responsible for the supervision of the railway sector’s safety in Poland, certified the Pendolino trains. During the tests performed, the Pendolino beat its own speed record with 293 km/h, establishing also Poland’s highest ever speed record on rail.

The trains have been manufactured in Savigliano, Italy, the Alstom centre of excellence for Pendolino. The traction and auxiliary have been manufactured in Sesto, Italy, the bogies and motors, have been respectively produced in Le Creusot, Ornans, France and the on-board electronics come from Villeurbanne, France and Charleroi, Belgium.
The European Union is supporting sustainable transportation initiatives and allocated €74 million for this high speed project in Poland. An additional €10 billion will be granted within the EU cohesion fund 2014- 2020 to further support the development of the Polish railway network. With 20,000 km of tracks, Poland has the 3rd biggest railway network in Europe.