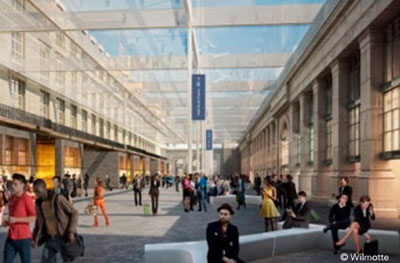 Major plans to redevelop Gare du Nord in Paris were revealed at a high profile SNCF press conference attended by the Mayor of Paris, Anne Hidalgo. The press conference, Gare du Nord 2015-2023 Transformations, took place within the 150 year old station on the 24 June 2015, organised by French transport operator SNCF. The presentation revealed plans to redevelop the station and its surrounding area over the next eight years. The project, designed by architect Jean-Michel Wilmotte, aims to retain the existing architecture whilst improving fluidity and flow through greater space and improved integration of transport networks. Commenting on the project Anne Hidalgo, Mayor of Paris, believes the redevelopment will “anchor the placement of the station within its neighbourhood.” The work will be carried out in two phases with completion due in 2023.

The redevelopment plan coincides with a proposal made on the 23 June announcing a bid for Paris to host the 2024 Olympic Games and the Universal Exposition of 2025.  The transformation programme will therefore be an integral part of the bid submission.

Gare du Nord, currently managed and developed by SNCF’s Gares & Connexions division, welcomes 700,000 passengers per day and 10 million a year, it handles over 2,100 trains a day. Gare du Nord provides high-speed rail services to northern France, the UK, Belgium, Germany and the Netherlands. The station integrates suburban and regional express services including RER and Paris Metro. On revealing the plans, Patrick Ropert, Managing Director of SNCF Gares & Connexions, highlighted the importance of the redevelopment work and insisted: “This train station is now looking towards the future.”

The first phase of work, beginning this year until 2018, will focus on improving the stations services and amenities over an area of 80,000sq metres. Work has already begun on refurbishing the RER intermodal transport area at a cost of €21 million and transferring the Paris Nord’s police station to Gare du Nord. Renovation will also take place on the RER B and D regional express platforms. Cultural events will continue throughout the rest of the year including Quai 36 collective art installation on platforms and image projection onto the facade of the station.

During 2016 the Eurostar lounge will be moved to a mezzanine floor that was once a hotel. The €15 million investment will also include improvements to the services terminal access and facilities. Additionally in 2016, Eurostar will introduce 900-seat Siemens trainsets replace the existing 750-seat units. Proposals for 2016 also include the opening of new shops, restaurants and business units and continued plans to reconfigure an underground passage linking the station to rue de Maubeuge.

Etienne Tricaud, Chairman of the AREP Management Board, confirmed plans to renovate the concourse of mainline departures / arrivals hall improving the flow of passengers to other forms of transport.

The 2018-2023 phase will focus on opening up the station to the rest of Paris and the promotion of the station being the main entry point into France. This will be achieved through the creation of a major European transport hub between the stations of Paris Est, Paris Nord and Magenta stations. According to SNCF, the stations would no longer simply be a collection of transit points: it would be a vital link in the urban chain creating new connections and offering neighbourhoods services, shops, office space and smooth, safe public transport.

The second phase of redevelopment will witness the construction of a new mainline departure hub on the eastern side of the station situated above ground level, on pillars with direct access to international services below via escalators. It will house a large retail area and provide direct access to the bus and taxi platform, which will become a new nodal entry point into the station and eliminate congestion caused by two-way departures and arrivals traffic in the main concourse. The development also aims to encourage flows between neighbourhoods. An expanded cross-channel hub is planned to cover the existing taxi area on the Western side of the station. The extension will provide greater capacity for an intermodal transfer area designed for cross-channel passengers and an entrance to the check-in area and customs, located on the upper level.

The final announced development for Gare du Nord includes the redevelopment of the station forecourt.  Currently a busy road used by buses and taxis, the programme will pedestrianise the area creating an esplanade home to restaurants and cultural events.  In addition, a new glass structure complimenting the heritage of the building will be added to the existing facade providing much needed space to the arrivals area. SNCF aims to finance a portion of the redevelopment through office and retail rents. The total cost of redevelopment will not be announced for another few months.