The UK government’s High Speed Two (HS2) rail project reached a significant milestone in its development with Chancellor of the Exchequer George Osborne announcing the bidding process for the first phase of work. The announcement, made during an event in Chengdu in China, kick-starts the bidding process for seven new contracts with a total combined […] 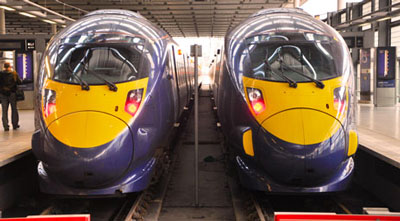 The UK government’s High Speed Two (HS2) rail project reached a significant milestone in its development with Chancellor of the Exchequer George Osborne announcing the bidding process for the first phase of work. The announcement, made during an event in Chengdu in China, kick-starts the bidding process for seven new contracts with a total combined value of £11.8 billion. It is hoped the Chancellor’s presence will encourage China’s biggest investors to be a part of the major construction project. Mr Osborne also announced a new ‘HS2 partnering day’ between British and Chinese firms to explore joining up on bids for contracts.

HS2 is part of the Chancellors Northern Powerhouse strategy to rebalance the UK economy by providing high speed rail from London to the Midlands, and the North. One constructed, HS2 will reduce journey times between London and Birmingham from 1 hour 21 minutes, to 49 minutes.

On opening the bidding process, Chancellor of the Exchequer George Osborne said: “This government is committed to rebalancing our economy and building a Northern Powerhouse, and improving transport links and launching HS2 is key to supporting long-term economic growth across the North and Midlands.

“That’s why I’m here in China today opening the bidding process for construction contracts worth £11.8 billion, which will propel HS2 forward.

“We are truly entering a golden era of cooperation between our two countries, and it’s crucial that businesses and communities from across the UK feel the full benefit of forging closer economic links with China.”

Transport Secretary Patrick McLoughlin added: “HS2 provides an excellent opportunity for businesses across the UK with 25,000 jobs created during construction and 3,000 when up and running.

“The start of the procurement process for these significant contracts is a major step towards construction on HS2 getting underway in two years’ time and a massive opportunity to help rebalance our economy long before the trains start running in 2026.”

HS2 Ltd chief executive Simon Kirby said: “The start of the civil engineering bidding process is a major milestone for HS2 as we continue to move towards the start of construction in 2017.

“Over the next decade, the winners of these contracts will go on to build 230km of bridges, tunnels and earthworks and create thousands of jobs across the construction industry.

“Together we will transform intercity rail travel in the UK, build specialist skills and expertise across the country, create at least 2,000 new apprenticeships and build a legacy to inspire the next generation of young engineers.”

In addition to the announced ‘HS2 partnering day’ the Chancellor invited participation in the HS2 Skills College scheduled to open in 2017.

The launch of the bidding process takes the form of a pre-qualification questionnaire (PQQ) for the ‘Main Civils Works’, ie the surface route and tunnels for phase 1. At this stage suppliers will be allowed to express an interest into all 7 packages.

Following the PQQ, successful applicants will be invited to bid for a maximum of 4 packages at tender stage, with a maximum award of up to 2 contracts per tenderer.

7 contracts are split over 3 geographical areas (North, Central, South), along the phase 1 route from London to Birmingham. There will also be the option for additional contracts covering the route North of Birmingham, subject to ministerial decisions on this later in the year.

The civil contracts are the first tranche of the Main Works Packages and cover surface routes and tunnels. ‘Tranche 2’ comprises stations, and ‘Tranche 3’ comprises railway systems. These will be launched in 2016 and 2017.

Construction works will commence following Royal Assent of the Phase 1 Hybrid Bill which is currently being considered by Parliament.