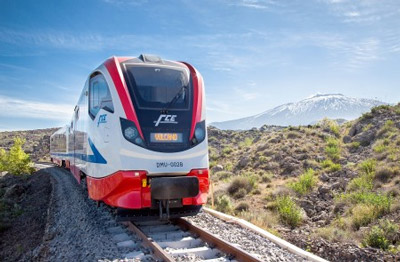 NEWAG S.A has announced that its first Vul­cano Diesel Multiple Unit (DMU) for Italian operator FCE set off for its inau­gu­ral ride from Cata­nia Borgo rail­way sta­tion in Sicily. The delivery forms part of contract signed in 2013 for the supply of four Vul­cano DMUs totalling approximately €14.8million. The first train has now been appro­ved for pas­sen­ger traf­fic having suc­cess­fully cove­red 3000km in test rides. The vehicles will initially operate during mor­ning and after­noon rush hours calling at towns surrounding Mount Etna on the Cata­nia – Ripo­sto route.

Vulcano DMU can travel at speeds up to100 km/h

The vehicles, which can travel at speeds of 100 km/h, will feature air-conditioning and are fully accessible including, mova­ble ramps for whe­el­cha­irs on external doors. In addition, the cab is equipped with ergo­no­mic con­trol panels to enhance the driver’s working conditions. Furthermore, the Vulcano has been installed with a moni­to­ring sys­tem to ensure passenger safety.

Thanks to the con­fi­gu­ra­tion of the pas­sen­ger com­part­ment, the train, which has a seated capacity of 106, can ope­ra­te on both urban and sub­ur­ban lines. An easily-modified seat lay­out, including fold-up seats, allows for opti­mi­sing pas­sen­ger capa­city.