Great Western Railway’s brand new Intercity Express Train has carried passengers for the first time, marking the next stage in the biggest fleet upgrade on the Great Western in 40 years. 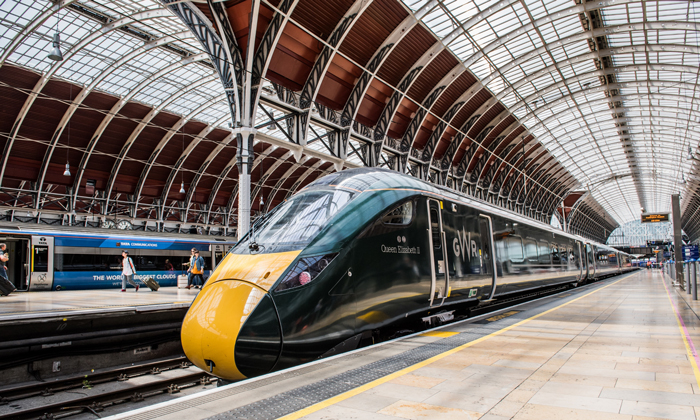 Travelling on the first Intercity Express train from Bristol Temple Meads to London Paddington was Transport Secretary Chris Grayling who said: “This government is investing record amounts to modernise Britain’s rail network and give passengers the faster, more comfortable trains and the better journeys that they expect.

“These new state-of-the-art trains show our commitment to put passengers at the heart of everything that we do and will carry people across Britain, from Swansea to Aberdeen and London to Inverness.

“Our railways are a huge success but passengers rightly expect improved services and better trains – and only last week I announced another £48 billion for the network from 2019 that will focus on better maintenance to dramatically improve reliability.”

The Hitachi built Class 800 Intercity Express Train has come into service with trains 800005 and 800006 forming the 10-carriage service operating the 0600 from Bristol Temple Meads to London Paddington.

The new £5.7 billion fleet, which is being built at Hitachi Rail Europe’s manufacturing facility at Newton Aycliffe in County Durham, will be rolled out across the Great Western and East Coast lines over the next three years.

The £82 million manufacturing facility has created more than 700 new direct jobs and more at depots across the routes, as well as supporting the UK supply chain. And more than 70% of the parts sourced for building the trains at the facility come from UK suppliers.

“We, at Hitachi Rail, are really proud to have built trains in the UK, designed using Japanese bullet train technology, that are improving passengers’ journeys on the Great Western route,” continued Karen Boswell, Managing Director, Hitachi Rail Europe. “Nine years of hard work has gone into making today happen, from creating a brand new factory and workforce, to establishing modern maintenance facilities from Swansea to London. We’ve delivered pioneering 21st century trains for passengers to enjoy and sparked a manufacturing renaissance in the north-east.”

The new trains have up to 24% more seating capacity than the high-speed train they replace, with increased legroom and luggage space, and more tables.

Furthermore, a new timetable will be introduced once Network Rail’s electrification programme has been completed in early 2019, adding 40% more seats and providing quicker, more frequent journeys.

“I am delighted to welcome GWR’s fantastic new trains,” said Network Rail’s Route Managing Director Western, Mark Langman. “This is another major step forward in the biggest ever transformation on the Great Western Mainline as we deliver more trains, more seats and better journeys for communities across the route.”

Next year GWR will extend the fleet to serve Devon and Cornwall, and a further 36 Intercity Express Trains – (known as Class 802s) has also been ordered from Hitachi to improve services between London Paddington and Exeter, Plymouth and Penzance.

“Today, we at GWR are once again making history, as we launch the first new Intercity Express Train in almost 40 years – and continue our journey to revalue rail in the hearts and minds of the travelling public,” added GWR Managing Director Mark Hopwood. “I am delighted to have this first train in passenger service. Over the next year we will continue to expand the operation of these new trains, including the introduction of another fleet specific to Devon and Cornwall.”