HS2 launches plan for a ‘green corridor’ alongside the railway

As well as delivering a new high-speed route, HS2 will provide better wildlife habitats, a greener landscape and support for community projects… 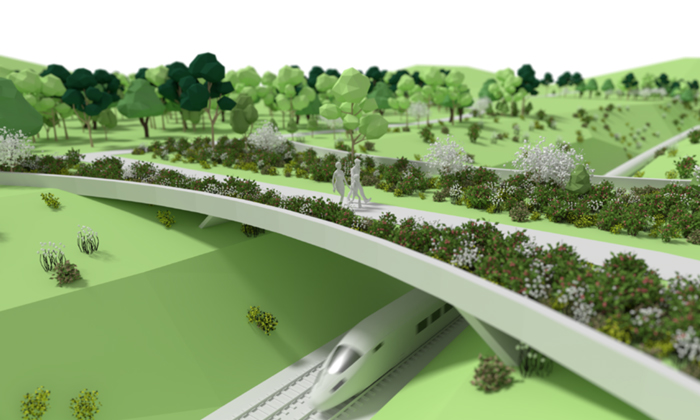 HS2 has presented plans focused on delivering a ‘green corridor’ that would run alongside the railway, consisting of new wildlife habitats, native woodlands and community spaces to help integrate the new line into its surrounding landscape.

The scale of work will be the largest ever undertaken by an infrastructure project in the UK, with a network of environmental projects stretching from London to the North of England.

Along the Phase One route, which covers 216km from London to the West Midlands, the green corridor will encompass seven million new trees, over 33 square kilometres of new wildlife habitats (equating to the size of 4,600 football pitches), 226 new ponds, tailor-made homes for wildlife, landscaping that re-uses around 90 per cent of excavated material and the opportunity to support community projects and develop amenity spaces such as access routes, public parks, open spaces and nature reserves.

Mark Thurston, Chief Executive of HS2 Ltd, said: “Alongside improving connectivity, boosting the economy and unlocking new jobs and opportunities, I’m determined to ensure that HS2 also works for the environment and local communities. This starts by doing everything we can to reduce our environmental footprint and minimise the expected impact of our construction work. Long-term, we’ll be leaving behind a network of new wildlife habitats, woodlands and community spaces; helping to create a lasting legacy along the route.

“We’ve already got to work by supporting a range of community projects and creating a series of new habitats, including planting over 230,000 trees so far. We’ll be calling on local people and organisations to get involved as the green corridor starts to take shape.”

This initiative is expected to set new standards for how Britain and the rest of Europe builds the next generation of major infrastructure projects.

As the corridor is being delivered, HS2 is encouraging local people and organisations to get involved in everything from landscape design to tree planting. This includes supporting local environmental projects through its various community funds.

The Government has also confirmed a £2 million extension to the HS2 Woodland Fund, so it can cover Phase 2a of the railway, from the West Midlands to Crewe. The fund is designed to help landowners near to the route directly create new native, broadleaf woodlands and restore existing ancient woodland sites. This is in addition to the extensive green corridor plans and community funds that are already in place.

Nusrat Ghani, HS2 Minister, said: “Our unique and beautiful countryside is one of our nation’s greatest assets. As we deliver the new high-speed railway our country needs, for economic growth and better journeys for passengers, it is imperative we set a new standard for preserving, protecting and enhancing our diverse woodlands and wildlife.

“HS2’s green corridor is one of the most significant tree-planting and habitat creation projects ever undertaken in this country. To support that vision, the government is providing an additional £2 million for the Woodland Fund, to support native species and help more people enjoy more new green spaces than before.”

The appearance of the green corridor will be tailored to the surrounding environment, with native tree species used to ensure that the new woodlands reflect the unique landscape of the different regions that the line passes through.