The Follo Line in Norway celebrates double breakthrough in the tunnel

The tunnel excavation in the region’s longest rail tunnel has reached its target towards Oslo city centre with the tunnel boring machines breaking through simultaneously. 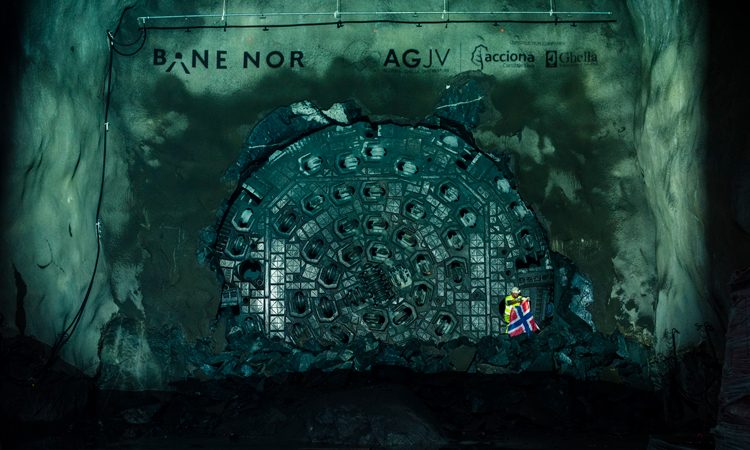 In two years, the two machines, named Dronning Eufemia and Queen Ellisiv, heading northbound toward Oslo, have successfully drilled nine kilometres each. The final launch for the Nordic region’s longest rail tunnel is scheduled for spring 2019 when the last two tunnel boring machines (TBM) come out at Ski.

It is rare for two hard rock machines to bore closely after each other over such a long stretch and come to the end at the same time. The two machines came out of the mountain and into a mountain hall, followed by tunnel workers crawling through the head of the large machines.

Bane NOR’s CEO, Gorm Frimannslund, said: “This breakthrough with the first tunnel boring machines towards Oslo city centre is the result of many years of planning and successful project implementation. The Follo Line project is one of the most important infrastructure projects in Norway.”

Bane NOR chose this method for drilling most of the long tunnel (18.5km of 20km), and it is entrepreneur Acciona Ghella Joint Venture (AGJV) who performs the tunnelling on behalf of Bane NOR. The excavation started 5 September 2016 and the boring in the north direction has been completed ahead of schedule.

Project Manager for TBM, Anne Kathrine Kalager, said: “With this project we have documented that tunnel boring, in addition to explosives and more conventional methods, is a good choice for the production of waterproof, long tunnels, also in hard rock, as we have here in the country.

“Two years ago, we started the first machine. When we reach the goal two years later, not only with one, but two machines, it feels like a big milestone.”

Well ahead of the Oslo Center, the two tunnel drills will be disassembled and transported out of the mountain. Equipment for this is already ready. Immediately, work on rail technology will begin to make the watertight tunnel a completed railway system.

Per David Borenstein, Project Director at Bane NOR, said: “The Follo Line will provide a state-of-the-art infrastructure for this part of the Oslo region and further south to the towns we have on the eastern side of the Oslo Fjord, and all the way to Sweden. It is designed for speeds of up to 250km/h and has at least 100 years of life expectancy.”

Bane NOR is expected to enter into 60 billion NOK of contracts for the next three years to ensure, among other things, a double track in Eastern Norway.

The 150m-long machines have 9.96m diameter drill bits and are specially made for extra hard rock.

Just over 65 per cent of the large Follo Line project has now been completed and the project will be completely finished in December 2021. Passengers can then take the train through the long tunnel on the journey between Oslo S and Ski – with a travel time half of the present duration.