The agreement was signed by Shadi Malak, CEO of Etihad Rail, and Saeed Eisa Mohammed Al Khyeli, Director-General of ZonesCorp. 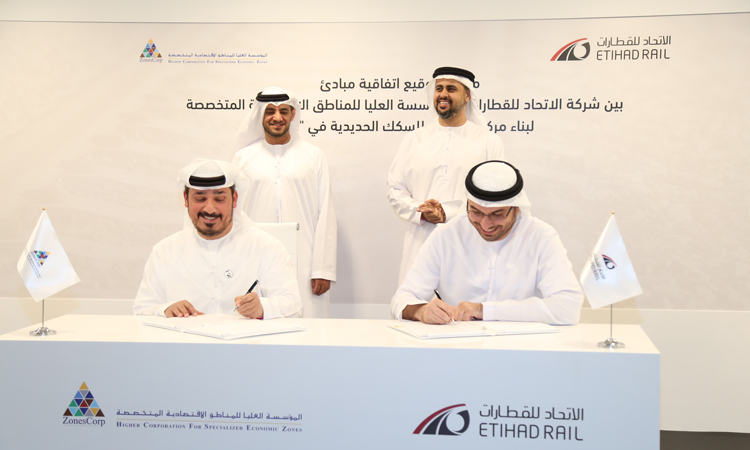 Etihad Rail has signed a Memorandum of Understanding with ZonesCorp to establish a railway logistics facility within the Industrial City of Abu Dhabi (ICAD).

The projects will serve the industrial entities in the Industrial City of Abu Dhabi (ICAD) and Mussafah, and will provide a point of departure for goods bound for Saudi Arabia. The logistic facility will be the closest logistics point to the city of Abu Dhabi.

The MoU outlines the collaboration between the two parties to form a joint leadership team and qualified task forces to follow up the progress and achievement of the project, as well as ensuring the completion of operational processes in accordance with the specified completion date, optimal performance methodologies and relevant policies.

His Highness Sheikh Theyab Bin Mohamed Al Nahyan, Chairman of Abu Dhabi Department of Transport and Chairman of Etihad Rail, said: “This agreement contributes to achieving our vision to connect cities and industries with a secure and sustainable railway network. It is also part of our mission to find economic logistics solutions for the rail network to connect the entire UAE and provide outstanding services to industries and society. ZonesCorp is a key partner for Etihad Rail as it is the largest developer and operator of purpose-built industrial zones in the UAE and is playing a leading role in developing the nation’s industrial sector.

“This agreement reinforces our efforts by which Etihad Rail seeks to support alternative and new industries through establishing a new transport system that enhances the existing infrastructure and contributes to improving freight transport. It also promotes the UAE’s leading role in shipping traffic, taking advantage of its geographical and economic position as a global logistics hub.”

The signing of the MoU comes as Etihad Rail prepares to embark on Stage Two of the Etihad Rail network, which will extend 605km from Ghuweifat on the UAE’s border with Saudi Arabia to Fujairah on the east coast, through ICAD, Khalifa Port, Jebel Ali and Khor Fakkan, to be followed by further routes.

H.E. Falah Mohammad Al Ahbabi, Chairman of the Department of Urban Planning and Municipalities, Chairman of the Higher Corporation for Specialized Economic Zones, said: “We are happy to be partnering with Etihad Rail and supporting the development of the industrial and commercial sector in Abu Dhabi. Etihad Rail’s logistic facility contributes to the integration of Abu Dhabi Logistics City, in order to provide a competitive environment for investment projects in the Higher Corporation’s economic zones and reduce operational costs for investors.

“Constructing a logistics facility and railway track, along with the necessary infrastructure, in ICAD will contribute to consolidating logistics operations in one place, which will bring further growth in the process of handling containers and cargos, as well as logistics services. This will help Abu Dhabi to consolidate its established position on the global trade map.”