The rail terminal capacity at Khalifa Port is expected to be the largest of its kind within the UAE, accommodating 2.4 million containers yearly. 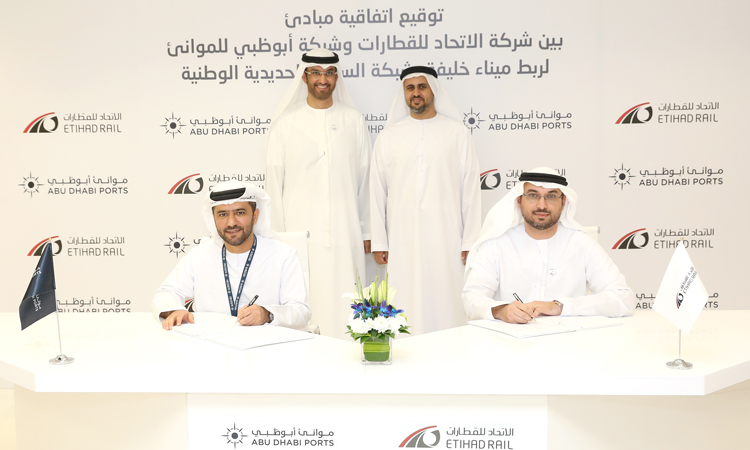 The agreement was signed at Khalifa Port, and His Highness Sheikh Theyab bin Mohamed Al Nahyan, commented: “The signing of a Head of Terms between Etihad Rail and Abu Dhabi Ports will have a positive impact on many sectors of the national economy and society.

“The Etihad Rail facility at Khalifa Port will enhance the efficiency of its infrastructure as well as the ability to increase its capacity in a more economical and reliable way. One train will have the ability to carry the load of 300 trucks.”

His Excellency Dr. Sultan Ahmed Al Jaber, UAE Minister of State and Chairman of Abu Dhabi Ports, praised the leadership’s vision, guidance and unlimited support for the development of the UAE infrastructure. He stressed that Abu Dhabi Ports continues to promote the UAE’s position in the world economy and trade map by linking infrastructure projects to transport networks to provide integrated services.

His Excellency added: “Etihad Rail’s National Railway project will represent a quantum leap of economic benefits for all commercial, industrial and logistical sectors through its strategic role in providing a fast and sustainable transport network in line with the highest standards of efficiency and safety.”

The agreement comes in line with the mutual efforts of Etihad Rail and Abu Dhabi Ports to support the growth and diversification of the UAE economy by strengthening the transport infrastructure and connecting vital facilities such as ports to the rail network to facilitate the transport of containers and various types of goods in a safe, efficient, environmentally-friendly way.

In line with the vision of the UAE’s wise leadership in supporting the economic and social development of the UAE, and in line with the UAE 2021 Vision, and the Abu Dhabi Economic Vision 2030, the agreement reaffirms that the project is moving steadily towards further developments and significant achievements, in line with Etihad Rail’s future vision to fully connect cities and industries through a safe and sustainable railway network, in addition to developing economic transport solutions to link the UAE.

Stage two of the Etihad Rail network will extend 605km from Ghuweifat on the UAE’s border with Saudi Arabia to Fujairah on the east coast, through Khalifa Port, Jebel Ali and Khor Fakkan, to be followed by further route additions.

Stage One of the project, which extends 264km, was delivered and fully operational in 2016, linking the Shah and Habshan gas fields in the Al Dhafra region of Abu Dhabi to the port of Ruwais on the Arabian Gulf, with the capacity of transferring 22,000 tonnes of sulphur granules daily.