Mike Lehman, a campaigner to develop a sustainable electric high-speed train line between downtown Chicago and downtown New York City – connecting over 15 major U.S. cities – discusses the benefits of this proposed line, and why he thinks the U.S. must embrace and support its development. 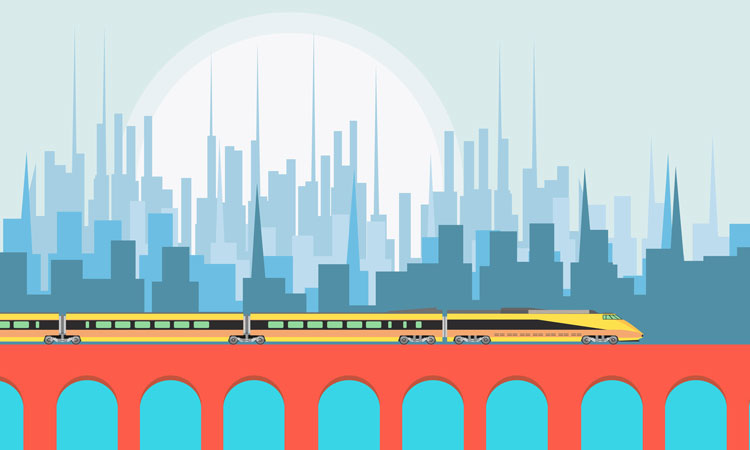 High-speed rail advocacy groups, state Departments of Transportation, corporations and other organisations are urging the U.S. Department of Transportation (USDOT) and the Federal Railroad Administration (FRA) to acquire the land and build the infrastructure necessary for the operation of a true Asian-European-style sustainable electric high-speed ‘bullet’ train – dubbed the ‘NCBT’ – from downtown Chicago to downtown New York City, ultimately connecting over 15 major U.S. cities and eventually connecting 120 city pair combinations.

The NCBT proposal offers an alternative mode of transportation that is more environmentally friendly than air travel to residents in the high-traffic and air polluted areas of Illinois, Indiana, Ohio, Michigan, New York-New Jersey and Pennsylvania, among others.

Research suggests that this proposed alignment will have the most significant and positive impact on U.S. transportation habits, and is an alignment that has been much desired throughout U.S. history. It is also the natural progression of the popular Northeast HSR Corridor (NEC) from Boston to Washington DC that is already in use.

Calls have been made to make this alignment – approximately 700 miles from the Chicago/Great Lakes Corridor to the Philadelphia/Northeast Corridor – a priority above and beyond all other high-speed lines proposed or under construction in the U.S. because of its potential use by over half of the country’s population. Furthermore, this new high-speed route is part and parcel of the many efforts going forward for the U.S. virtue of finally reducing itself of its intense generational and very expensive oil addiction.

Proposal for the high-speed rail line between Chicago and NYC

The old paradigm of passenger trains only using rail freight infrastructure, or incrementally higher speed rail projects of 500 miles or less only, and diesel locomotive power is over.

The public want 200mph high-speed train systems connecting major cities using sustainable, responsible technologies – such as electric – which has been used on other high-speed systems worldwide for decades now.

The NCBT proposal offers an alternative mode of transportation that is more environmentally friendly than air travel to residents in the high-traffic and air polluted areas of Illinois, Indiana, Ohio, Michigan, New York-New Jersey and Pennsylvania, among others. There are currently thousands of daily commercial intercity flights between these states and cities, burning billions of gallons of jet fuel every year – unsurprisingly making it the most air polluted corridor in the U.S.

Fees generated from passenger flights – as well as oil, gasoline and jet fuel – need to be some of the dedicated sources of funding for NCBT infrastructure in order to alleviate the many issues related to oil-dependent transportation.

There are five main reasons why sustainable electric high-speed travel is beneficial:

California, the Northeast and other regions of the world – including China and Russia – already have high-speed rail lines under construction or in the planning stages. U.S. states that have financially supported Amtrak/passenger rail should be rewarded for that support and be able to participate in new high-speed train initiatives. For comparison, the logistics/demographics of the NCBT route connects 100 million more people than California’s existing high-speed rail plans in a similar length footprint.

High-speed trains and the lines on which they operate offer a superior substitute for gas-guzzling and polluting airplanes.

High-speed trains and the lines on which they operate offer a superior substitute for gas-guzzling and polluting airplanes, and they are a key green part of the necessary diversification of transportation energy (such as electric/hybrid cars, alternate transport fuels, etc.) needed to reduce oil dependency. Presently, 70 per cent of oil use is for transportation and liquid fuels, such as gasoline and jet fuel.

As for energy overall; coal is for electricity, natural gas is for heating, but oil’s primary use is for transportation. Wind, solar, hydro/water and nuclear powers are also for electricity – the U.S. has plenty of varied electric energy capacity to run trains and high-speed rail infrastructure for a long, long time.

Justifications for the new high-speed rail line between Chicago and NYC:

1. Many states would benefit

The NCBT proposal is for an exciting, strategic and practical high-speed rail line that is powered by electricity and which would use both ‘dedicated’ and existing infrastructure.

The NCBT proposal is for an exciting, strategic and practical high-speed rail line that is powered by electricity and which would use both ‘dedicated’ and existing infrastructure. The energy, economic, security and health rationales for this new, dedicated mode would mostly be for servicing the states of Illinois through to New York/New Jersey, connecting the cities of Chicago, Cleveland, Pittsburgh, Philadelphia and New York. Detroit and Cincinnati/Ohio can be individual high-speed rail line origin-destination points. The total linked U.S. high-speed rail systems state populations are over 150 million, representing approximately half of the U.S. population.

The Great Lakes/NCBT corridor high-speed line could carry in excess of 100 million passengers a year, drawing travellers from air and bus, but, mostly, automobile modes, in addition to acquiring new high-speed rail travellers. Over its very long functional lifetime, the properties of the system and large initial capital investments would prove to be very productive and efficient. In contrast, relative past operations costs and subsidies of the aforementioned cities’ air transport, interstates roads and highways were, and are, recurring and far more expensive than what the cost operations of the new route would be.

The Great Lakes/NCBT corridor high-speed line could carry in excess of 100 million passengers a year, drawing travellers from air and bus, but, mostly, automobile modes, in addition to acquiring new high-speed rail travellers.

The NCBT proposal will be unpopular with air and road transport related industries/lobbies (nine out of the 10 largest companies worldwide either produce automobile or petroleum products). However, it should not be, since additional passenger railroad capacity also alleviates some of their own modes’ problems. Hopefully progress and logic will prevail, and this new high-speed rail proposition can develop and thrive, despite other interests.

There would be new job creation generated by construction of the NCBT route and the continual operation and maintenance of the route. Ridership levels should reach and exceed the levels of the similar French TGV high-speed train, which has over 50 million annual trips and revenues of approximately $5 billion a year.

With potential revenues on the NCBT route of $5 billion or more a year, the large investment in the line’s infrastructure and trainsets would be paid for, realistically, within several years’ time, similar to the French TGV experience.

There would be new job creation generated by construction of the NCBT route and the continual operation and maintenance of the route.

This new high-speed rail route would augment and strengthen Amtrak’s abilities and potential elsewhere on complementary routes and that of the Acela/Northeast corridor (NEC), which is Amtrak’s most profitable and popular route.

High-speed rail in the proposed region would enhance cities’ CBDs and integrated rail development. Proposed Phase 1 connected cities – Chicago, Cleveland, Pittsburg and Philadelphia – are expanding their own internal transit rail systems, proving that these cities are not entirely reliant on cars.

Acts of terrorism occur more often with air travel (hijackings, bombings, sabotage, poisonings etc.) These attacks are significantly rarer on rail transport networks, and the proposed NCBT would not call for the same extreme level of security expense which airports and airlines require.

In the advent of an airspace shutdown or bad weather, the NCBT corridor would serve as another travel alternative to air and road in the northeast U.S. and Great Lakes region.

In the U.S., approximately 50,000 people die and tens of thousands more are permanently disabled every year from road-related accidents. So, of course, less driving would result in reduced death rates across the U.S. Hundreds more people are killed and severely injured yearly in intercity plane crashes, too. In France and Japan, high-speed trains have not had a passenger fatality in over 90 years combined. Thousands of lives and billions of dollars can be saved by using high-speed trains in lieu of personal vehicles and aircraft.

Thousands of lives and billions of dollars can be saved by using high-speed trains in lieu of personal vehicles and aircraft.

It is anticipated that most high-speed rail infrastructure could be built adjacent to existing highways and railroad lines for environmental considerations and land use purposes (aircraft and road vehicles generate lots of noise and are big air and land polluters).

Over one third of Americans don’t like to fly, leaving long, congesting, costly and hazardous car and bus travel or complex Amtrak timetables as their only alternatives.

Airport traffic creates more pollutions/carcinogens/congestions around large population centres. There is a total of eight potential congestion-adding car trips to and from airports to pick-up and drop-off a flyer at both destinations per roundtrip. The combination of traveling by rail, then walking, is much healthier and more beneficial compared to the customary airplane/car combination.

I believe a fresh, new approach to high-speed rail travel is required in the U.S. and the positive benefits of a Chicago-NYC route are too great to be ignored.

10 responses to “Would a high-speed rail service between Chicago and NYC be popular?”