The Future of Rail Freight: ‘There are new opportunities for the industry to innovate and grow’

As part of Global Railway Review’s ‘The Future of Rail Freight’ series, John Smith, Managing Director of GB Railfreight, discusses the impact of the COVID-19 pandemic and how the increased global focus on sustainability will hopefully result in a more successful rail freight industry. 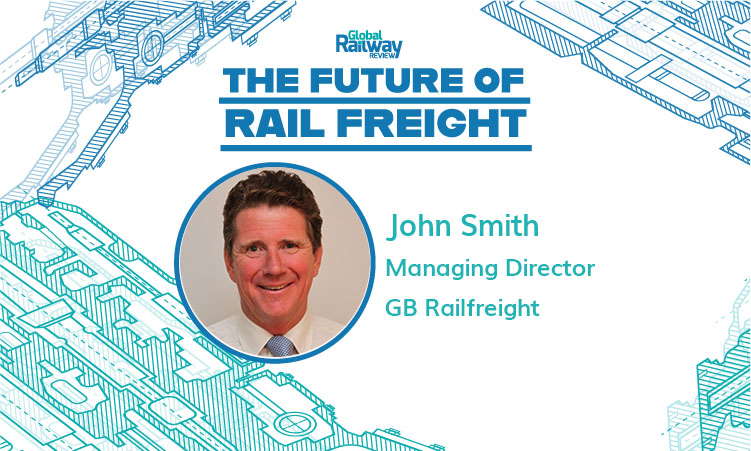 What more can rail freight do in its contribution to the decarbonisation of the industry?

Rail freight has an important role to play in helping the UK meet its decarbonisation targets. An average freight train moves the equivalent of 40-70 HGV loads, while only emitting 25 per cent of the equivalent carbon emissions as road transport. When combined with rail’s advantageous performance in terms of nitrogen dioxide and particulate matter emissions, rail freight demonstrates a clear contribution to the challenge of meeting the UK’s carbon-cutting targets.

In its March 2020 policy paper on decarbonising transport, the Department for Transport (DfT) agreed that rail is already one of the most carbon efficient forms of moving goods over long distances, with its environmental performance continuing to improve further. The level of CO2 emissions per freight tonne km in 2018-2019 was 4.1 per cent lower than the equivalent figure for 2017-2018.

We are pleased that the UK government recognises the economic and environmental benefits of rail freight, including investment of £235 million in the Strategic Freight Network between 2014 to 2019 to improve the capacity and capability of the rail network for freight. We hope that the government will build on this recognition of advantages that the sector can bring in terms of reducing emissions and supporting the need for economic recovery once COVID-19 restrictions are lifted.

To what extent do you think the rail freight industry needs to make quantum leaps in technology to improve activities?

Technological advances have played a huge role in the development of the rail freight sector over recent years, but these have tended to be incremental improvements rather than quantum leaps.  Digital technology is playing an ever-increasing role in the efficient and safe operation of the railway, and digital signalling is playing an important role in making the most effective use of the UK’s congested railway, which increases the opportunities to increase freight traffic.

Cloud-based digital technology is now central to all parts of GB Railfreight’s (GBRf) business. Over recent years, we have invested millions of pounds to ensure that our staff have the access to the information they need through tablet computers. The location of our trains is tracked in real time, allowing the team to visually understand train positioning. Train Managers have access to information they need for their route on in-cab systems. Locomotive performance is constantly tracked and monitored by our engineering teams, and our ground staff can use handheld devices to communicate the arrival and departure of trains onto the rail network, speeding up turnaround times and reducing delays.

GBRf has recently spent £1.5 million on train simulators, ensuring that drivers from across the industry can be prepared for the future digital railway”

Each of these developments incrementally increases the efficiency of the railway, improving performance and reducing risk.

Digital technology is also playing an increasing role in our driver training programme. GBRf has recently spent £1.5 million on train simulators, which includes a full in-cab European Traffic Management System (ERTMS), ensuring that drivers from across the industry can be prepared for the future digital railway. New technology is also allowing our Train Managers to keep their route knowledge up to date, with tablet applications allowing them to refresh their knowledge wherever and whenever works best for them.

What must the rail freight industry concentrate on in order to claim more of the supply chain and become more competitive?

Our credentials as one of the most sustainable ways to move goods around the country provides us with huge opportunities, particularly as reducing emissions becomes more important across the supply chain. This needs to be combined with reliability, flexibility and excellence in customer service. Our investment in technology is playing a big role in constantly speeding up the process of loading, moving and offloading goods and the flexibility of our services.

We have also made significant investments in new rolling stock to allow the industry to adapt to new demands. Over the past decade, we have seen the industry move from one which was very focused on the movement of coal and steel to one which has seen huge growth in moving containerised goods through our multi-modal services. We have also seen growth in areas such as biomass for energy production and an increase in international rail services through the Channel Tunnel.

Our commitment to innovation will ensure that our services will constantly adapt to the needs of the economy and our customers.

What do you think will be the lasting effects of the COVID-19 crisis on the rail freight industry?

COVID-19 restrictions have had a negative impact on the rail freight industry, as it has across the economy. But, as restrictions are lifted, there are new opportunities for the industry to innovate and grow.

The crisis has increased attention on sustainability and the importance of shaping the recovery to ensure that it is a green one. This is an opportunity for rail, given its low carbon credentials.

As restrictions are lifted, there are new opportunities for the industry to innovate and grow”

COVID-19 restrictions have accelerated the growth of the digital economy, resulting in a rise in internet shopping. We are asking ourselves how rail could play a role in making these deliveries more sustainable. This has led us to trial converting passenger trains into fast freight services that can move internet shopping orders into London overnight, ready for delivery next morning. This would increase the speed of deliveries and lessen their environmental impact.

A service was run into Euston station in April 2020 using a 100mph Class 319 EMU train, which, until recently, was providing commuter services in the West Midlands. This is the first time that a successful trial of using a converted commuter train has been undertaken in the UK.

The railway network used to be extensively used for parcel deliveries between stations, but, apart from specially designed trains used by the Royal Mail between dedicated terminals, parcel delivery by train disappeared decades ago.

As well as strengthening supply chains during the current crisis, a return of parcel delivery services to mainline stations would provide online retailers with more sustainable and reliable options for overnight parcel deliveries, bringing deliveries into the heart of major cities.

What key themes and trends will be important for GB Railfreight to focus on to help support the future of the rail freight sector?

The growth of intermodal traffic – which now accounts for approximately 36 per cent of all rail freight movements worldwide – is key to the railway playing a bigger role in improving the sustainability of the global logistics industry. GBRf is focused on supporting the growth of this sector through innovation and investment.

Intermodal growth has been focused on services from deep-sea ports, but, if the COVID-19 crisis does lead to a focus on shortening supply chains, there are opportunities for more international services to Europe through the Channel Tunnel. Transporting rail freight through the tunnel could play a role in easing the strain on ferry services on the Dover to Calais route, especially if the ending of the transition period leads to increased delays for lorries using the short straights crossing.

Highlighting rail’s advantages in terms of sustainability remains key to the future of rail freight. Successive British governments have recognised the positive environmental impact of supporting businesses to move freight transportation from road to rail through the Mode Shift Revenue Support grant scheme. While the total spending on the grant is small, it does play an important role in supporting the rail freight sector. The DfT’s own analysis suggests that the grant will support the removal of nearly a million lorry journeys per year. The continuation of this grant will play an important role in supporting further shifts from road to more sustainable rail services. Given its effectiveness, we believe that the government should consider extensions to the grant and how it could support more freight to be moved by rail.

The government have also set a target of 2040 for the removal of diesel locomotives from the railway. This is a challenge for the sector, as freight locomotives need to deliver significant traction power to pull large loads. Electric traction is one option for the freight sector, but we are a long way from being able to provide electric power to all rail lines. This means that freight operators are focusing on electro-diesel locomotives, which can use electric traction where overhead lines are available and diesel in other areas.

These locomotives are significantly more expensive and are currently uneconomic for a sector which operates on low margins. We believe that the government should look at options to provide targeted financial support for the adoption of electro-diesel locomotives, which would support them in delivering on their target of totally removing diesel from the rail network and support an increased proportion of freight traffic moving from road to rail.

John Smith founded GB Railfreight (GBRf) in 1999 and is the company’s Managing Director. He has worked in the rail industry for 42 years. In 1977, John joined British Rail, managing rolling stock maintenance at various locations, including York, Longsight, Bounds Ground, Willesden and Wembley, before eventually becoming Deputy Managing Director at rail operator Anglia Railways. He decided to set up GBRf in 1999 in order to undertake more open access work on the rail system. John graduated from Loughborough University in 1982 as a mechanical engineer. He is currently a member of the Institute of Mechanical Engineers.