The official opening of the Lund Tramway – connecting the city centre of Lund, Sweden, with a completely new part of the city in the North East – is planned for 13 December 2020. 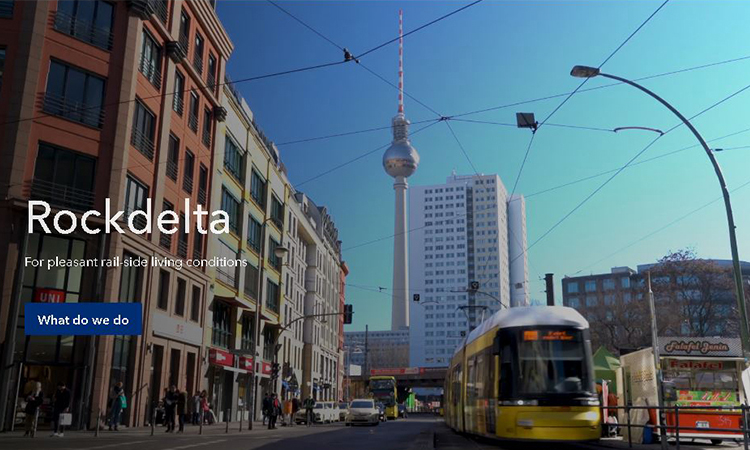 The Lund Tramway is a 5.5km-long, double-track tramway – on exclusive track – connecting the city centre of Lund, Sweden, (122,000 inhabitants) to the hospital, university, science park and the multidisciplinary research facility – Science Village/ESS – in Brunnshög, a completely new part of the city in the North East.

Nine stops with 45m platforms have been built, and seven modern trams with a practical capacity of approximately 200 passengers are going to run every 7.5 minutes. The construction works on the infrastructure started in February 2017 and finished at the end of 2019. The official opening of the line is planned for 13 December 2020. 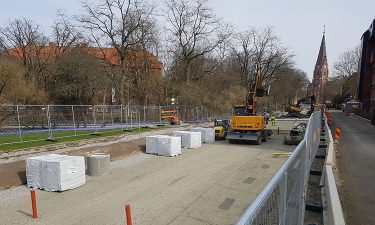 The overall plan for this first new tramway in Sweden since 1911 includes new pedestrian and cycle paths and new lanes in some places. The area around the tracks contributes to the urban greenery, with 300 trees planted and 40,000 square meters of grass rolled out.

In 1999, the city of Lund introduced a strategic plan to phase out the use of private vehicles in favour of sustainable public transport. In 2015, the city decided to aim for completely pollution-free traffic by 2050. To support this commitment, the new tramway has been built, which will be the backbone in a sustainable city development along the line.

“The fact that the tram is now in place means that those who move here will be able to have public transport as a natural choice right from the start,” says Pernilla von Strokirch, Lund Municipality’s project manager. The investment for the infrastructure is approximately € 86 million, jointly funded by the Municipality of Lund and the Swedish Government.

Lund Central Station is the third biggest station in Sweden; 40,000 people commute back and forth to Lund everyday. Most of them continue on their way from the medieval city centre to the hospital, the University, the Science Park and the research plants, making this the busiest commuter routes in Lund, also called ‘The Science Road’. 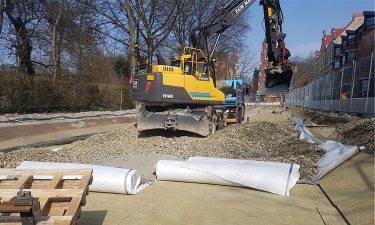 Building a new tramway in a lively city centre with narrow streets is challenging in many ways. “You have a large construction site,” says Pernilla, “and still people should be able to pass and not be hindered.”

In two locations, specific challenges had to be overcome concerning ground-borne vibrations. Ground-borne vibration and noise is caused by the contact between the wheels and rails when a tram or train passes over a track, causing dynamic forces in the substructure. This is propagated in wave form in the ground and can be transmitted into foundations of nearby buildings. Also, structure-borne noise (audible sound waves) may be produced by resonance generated in walls and ceilings.

Pernilla said: “The beginning of the line is situated in the medieval city centre. The closest buildings there had to be protected from ground-borne vibration translating into sound in the buildings. At the other end of the line, we have the Max IV research facility, including a circular particle accelerator that is obviously extremely sensitive to ground-borne vibration. In these two areas, we have applied Rockdelta stone wool mats for the attenuation of the vibration.”

The project was managed in cooperation with Skanska, and they were responsible for the detailing of the construction and the procurement of the materials used. Skanska opted for Rockdelta after a lengthy period of calculations and comparisons of possible solutions for the vibration issues. Also, the experts from Max IV were involved for their end of the line. Skanska calculated the performance and the thickness and types of the mats. This cooperation eventually led to the use of literally all available Rockdelta product thicknesses. In some areas, specific requirements even necessitated several layers of mats. “They tuned that track like a piano,” as one of the constructors observed.

Choice based on performance of the solution 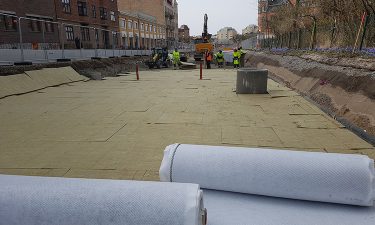 “In the choice of the Rockdelta system, Skanska evaluated a lot of factors, including performance, pricing, sustainability, longevity and also the logistics and working conditions on the construction site,” says Pernilla.

The tramway infrastructure is designed to withstand the low temperatures and weather conditions in Sweden. Rockdelta is made of stone wool and the mats have an extended lifetime, with retained functional performance even under extreme conditions. The lightweight mats are easily handled and can be stored outdoors without any impact on the quality.

Rockdelta mats can be installed on surfaces that are not completely even and do not have to be glued or welded together. This was a definite advantage in this project, where one of the requirements was that no water should stay in the tracks. The small gaps between the mats function effectively as a natural drainage system.

The only suitable solution

Rockdelta is applied as a resilient mat at the basis of a track system, where it decouples the track from the ground. Situated in the substructure, the mats combine optimum acoustic performance with minimum rail deflection. Pernilla concluded: “For this project, with a track system with longitudinal beams and ballast, we found Rockdelta to be the best solution.”