Preparing for winter: What do Network Rail do?

Dr Sam Bemment, Technical and Innovation Manager at the Railway Industry Association (RIA), explores how Great Britain’s railway copes with the challenges that harsh winter weather can bring and what innovations can be developed to minimise disruption to the rail network in the future. 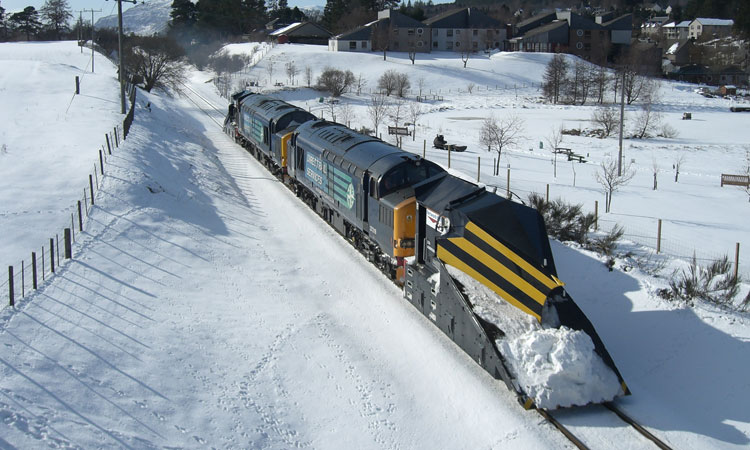 It is common knowledge that bad weather can make running Great Britain’s (GB) railway system difficult and, when extreme weather occurs – whether flooding, very low temperatures or snow storms – it can be difficult to manage the impacts to assets and, ultimately, to keep trains running on time.

How does GB cope with the challenges of different seasons and what innovations can be developed to stop the disruption caused by extreme weather events in the future? As part of its Unlocking Innovation series, the Railway Industry Association (RIA) spoke to Network Rail about the work that they do to prepare for the winter, and the exciting developments surrounding utilising data that they are working on to minimise the impacts of the weather. Given the recent tragic incident at Stonehaven – where three people died due to a derailment caused by a landslip – it is clear that dealing with extreme weather is vital for the continued safe running of our rail system.

How Network Rail prepares for winter

On the GB mainline, despite a few outliers, delays and cancellations due to extreme weather events have been on a steady downward trend in recent years, and a large part of that trend is due to the efforts of Network Rail and its supply chain. Speaking to Kieran Duggan, Network Rail’s Operational Weather Resilience Manager, it is clear just how much work goes into preparing the rail network for seasonal changes. Network Rail Route Businesses have committed Seasonal Delivery Specialists who ensure that the rail network is ready going into each season. There is a stage-gate process that assures on Network Rail’s plans right across the national network. This is coordinated by the National Weather & Seasons Delivery Specialists, in conjunction with Regional/Route Seasonal Delivery Specialists. The stage gate process involves measuring seasonal preparedness against leading control measures to assure that the rail network is resilient enough to mitigate against the weather that a season may bring. Leading indicators are sent to the regional seasonal leads for review and then discussed with them, generating key deliverables that the teams can deliver to keep the network moving.

Kieran says delivering a consistent approach to all season’s preparedness and weather resilience has become a core industry focus. Recent extreme weather events, such as those in winter 2017/2018 and summer 2019, demonstrated that there was less focus through industry forums with preparing for spring, summer and winter, compared with that devoted to autumn. A review across the business was carried out to provide more assurance, led by the Network Services Director.

As the winter season arrives, national and regional reports are produced to provide an overview of the impact of the season to date, also reporting on resource and delivery risks. Kieran gives the example of the Winter Seasonal Treatment Fleet team, within the Route Services Directorate of Network Rail, that shift immediately from autumn to winter delivery, monitoring for signs that they need to take greater measures to keep Route Businesses operational, providing services such as de-icing and snow clearance.

Snow ploughs, snowblowers and independent snow ploughs (ISPs) are located at key strategic areas to help manage the delivery of the operational network during extreme snow and ice events. ISPs are capable of clearing snow depths of up to 8ft/2.4m. Multi‑Purpose Vehicles (MPVs) are utilised predominantly in southern parts of the GB rail network to apply treatment to prevent ice formation on the conductor rail by scraping ice deposits, brushing sleet build up and applying anti-icing products.

Kieran highlights the key working relationship with Network Rail’s weather supplier, MetDesk, who provide bespoke weather forecast arrangements set against operational and civil engineering standard principles. For extreme incidences, there is often around five to 10 days to understand the confidence in impacts of a forecast; however, the Extreme Weather Response Process in place at the route, regional and national levels sets out the framework to manage such situations. Each route has an Integrated Weather Management Plan (IWMP). The plan holds route asset management plans, listing key assets like earthworks and off‑track drainage, which Network Rail will monitor to ensure that any impact of extreme weather is mitigated against and resilience enhanced.

How Network Rail is improving its response

Mark Langdon, who works in Research & Development in Network Rail’s Rail Resilience team, referred to a clear focus in integrating operational reality with academic research, both of which need to coexist effectively. The driver for this is the testing of viable research proposals under live operating conditions at the earliest opportunity – Network Rail are seeking to develop an operating framework with the Rail Safety and Standards Board (RSSB) in order to accommodate both the research integrity of the proposals and the testing of their robustness on the operational railway.

Research projects often go through four key stages: Literature review, modelling, lab testing and site trials. Mark described how Network Rail and RSSB are seeking to expedite the process by which solutions can get to trial, including running the stages in parallel where appropriate and safe to do so. The initial focus for this approach is likely to be a research project directed towards the mitigation of ice formation on overhead line equipment (OLE).

Mark also described how they were seeking to collate bespoke forecasting requirements from the routes as part of the broader move towards improving forecasting capability. He spoke about contributions to and learning from different national and international workstreams and workshops which covered a range of topics, including multimodal weather resilience and Extreme Weather Alerts. In addition, where relevant, Network Rail are to review continuous-use elements of the infrastructure under processes such as gritting and salting. This includes the impact on level crossings – an important inter-infrastructural interface with the road infrastructure, itself exposed to extreme weather events and failures.

On climate change, it is clear that Network Rail needs a short-term and mid-term response to weather events, inclusive of the long-term view. So, while the team are addressing the short-term impacts of weather events on the network, they are also looking to address the medium-term views, which need to be understood in relation to the overarching, systemic implications of climate change on short-, medium- and long-term weather patterns.

Use of data to tackle weather events

Network Rail’s R&D Portfolio is also working on initiatives that could better support the railway’s ability to cope with extreme weather. Janine Fountain, from the Portfolio, sets out their Real Cost of Weather Resilience and Climate Change Adaptation (WRCCA) Events. This project looks to assess the whole life cost of adverse and extreme weather events, developing a cost information tool that can be used by Network Rail.

The goal is that this data can help with strategic and investment planning decisions by being able to see the impact of a weather event on the full life of the asset. This could also help with the benefit cost ratio analysis when deciding if an asset requires adaptation improvements. Janine gives the example of the decision to renew a junction: Network Rail may decide to renew it like-for-like, but the data provided by this initiative could show that, instead, it would be better for the long-term whole life cost to make improvements to enhance robustness from the effect of storms, flash floods or other weather events.

Crucially, this is about determining the full costs of a weather event, which often aren’t fully understood and rarely quantified. The costs will include the damage to the asset, but also the cost of getting a team to go out and fix the asset, the Schedule 4 & 8 payments made due to disruption on the track and the costs to passengers of delays. This means that Network Rail will be able to determine the impact and cost that climate change will have not only directly, but more widely to those who use the rail network.

The other area that Janine is working on is around mapping vulnerable and critical assets, which could become susceptible to damage due to climate change. The severity of weather events is likely to increase due to climate change, making historic patterns of vulnerability an unreliable guide to future risk. The R&D Team are, therefore, developing a tool to support proactive identification and prioritisation of resilience interventions at both route and national levels. It combines both existing and new data sources, integrating them into an accessible geo-spatial format for routes and regions in Network Rail to use.

What is clear is the importance of data in tackling the impacts of weather events and of fully understanding the impact that adverse weather can have on assets. Both of these projects will be developed over the coming years and could provide a useful tool in supporting the adaptation of the network to climate change.

Adverse weather events and seasonal changes can provide difficulties to the rail network, but it is clear from speaking to professionals at Network Rail that this is a challenge that they are ready for. Projects are underway that will also help Network Rail to develop its responses to more extreme weather events, allowing them to ensure that their assets remain resilient to climate change. As the incident at Stonehaven has shown, this is an ever‑more vital agenda for the rail industry.

Sam Bemment joined the Railway Industry Association (RIA) from Loughborough University, where he was leading the Repoint Project to create fault tolerant track switching. Sam has a PhD in Railway Systems Engineering and founded his own company, SkyBlue Engineering Ltd, in 2015, specialising in research, development and innovation consulting, before going on to work with governments, blue-chips, SMEs and infrastructure owners across Europe.