Opportunities for digital twin technology on the French railway network 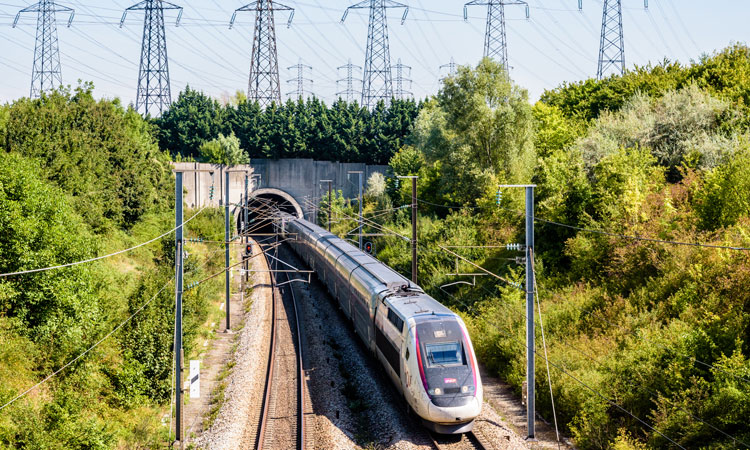 At a time when numerous strategy consulting firms are excited about digital twin models being the next technological and digital breakthrough, and before addressing in this article1 the projects relating to the SNCF Réseau’s Digital Twin Program undertaken for the French railway network, we feel that it would be useful to answer the following question:
Is it seriously possible to envision that a digital twin model could be constructed for a 150-year-old industrial system, made from a wide range of materials – such as steel, wood, concrete, electrical systems and automated equipment – with a complex computer infrastructure, and which has evolved over different rejuvenation and rebuilding periods – and to feasibly identify new performance goals thanks to innovative uses?

For a long time, a digital twin has been considered to be a 3D model representing objects as realistically as possible. However, in the case of a railway system, when modelling the area close to railway lines, the surrounding environment changes throughout the seasons, which requires the ability to acquire and manage a digital representation that can evolve over time for a network of over 50,000km of railway lines, as in the case of the French railway network. However, this purely spatial representation does not consider the functional dynamics of the railway network, such as the train circulations, management rules or operating processes. There are, therefore, additional layers of data required to translate the lifecycle of the network at a daily, weekly and monthly scale. Different sources of information can be added, representing varying levels of complexity, arising from potential incidents affecting various systems or subsystems of the network.

A national railway system is inherently highly complex. A digital twin must, therefore, be capable of absorbing these different levels of complexity at various scales of consideration, both spatially and temporally: from a minute’s delay to the years of the century-old work of art, from the management of the catenary geometry over the millions of kilometers travelled each day to the record-keeping of the maintenance operations, to the financial planning for new projects. Herein lies the challenge which can only be addressed through, on the one hand, being capable of having a global systemic and inclusive vision, to allow future evolutions to be potentially integrated, while at the same time being able to deliver concrete gains for the infrastructure manager through the introduction of levers to create improved performance based on the digital transformations of the network.
It is, therefore, based on these two axes that SNCF Réseau has approached digital twin modelling since 2018: globally, by the conceptualisation of the existing and future uses through to the use of a new systemic data model named ARIANE, through the digitalisation and development of the transversality of work data historically stored in silos in their computer information systems, but also, at another operational level, through the development of concrete applications delivering measurable value by using a digital approach to create new processes, which will create enhanced performance today.

For us, the digital twin modelling for SNCF Réseau must rely on the sum of interconnectivity between the diverse digital and application initiatives currently being undertaken within the company. Before imagining all of the possible new uses of the technology, we consider it essential to identify the projects which are wholly ready to be orientated towards the digital twin approach. A railway network sells one, and only one, product en masse: train slots. A train slot is, in today’s day and age, essentially numerical data contained within a computer information system. A slot has a complex lifecycle which, for SNCF Réseau, is provisionally created by predicted client demand of up to three years before it is used. There are, therefore, different phases involved: conception, operation, maintenance and the archiving of the train slot, or rather the data of which this slot represents within the computer system. So, here is a central product which exists almost completely in a digital universe except for its brief consumption phase, where it is transformed into an actual train journey. It is very interesting to understand how historical and centralised processes can be digitalised and approached through a system of data management throughout the lifecycle of this product within the complex computer systems. Admittedly, the digital twin has not yet been adopted at the same speed throughout SNCF Réseau, though we are working to identify and promote new uses, which will provide inspiration for all new projects.

However, for the potential performance gain to be translated into a functional programme, or as the foundation for numerous applications, success need to be demonstrated on a case-by-case basis, which should encourage everyone to say, “It’s possible, and I would like to get involved with my own projects!”.

To follow are five current projects being undertaken which contain the potential for important performance gains offered by a digital twin approach:

In the context of the European Shift2Rail programme, SNCF Réseau is developing, in partnership with other industries, ‘an augmented As-Built record’ following rejuvenation work undertaken in the network by in-house construction trains. The objective is to ensure the digital continuity of information gathered between the construction phase and the subsequent entry into the maintenance and operating phases. We will deliver structured data, which is easily accessible and fully digital, to all of the staff, who will be able to utilise it within the railway system lifecycle.

2. Artificial intelligence (AI) for the management of train clearance on the entire network – the Omega2N project is also undertaken on behalf of Network Rail

The detailed understanding of clearance on railway installations (platforms, bridges, inter-axes etc.) is a fundamental element for ensuring railway safety. To improve performance and safety, we are developing an approach based on a complete digitalisation of our infrastructure using LiDAR 3D cloud point data, which represents a reference clone. Through the development of complex algorithms, which can process this data, we are able to digitalise the entire process of verifying the conformity of our installations. In addition, we have also implemented this method for the UK’s infrastructure manager, Network Rail, who are also investigating the potential of point cloud data processing for updating their internal clearance database.

The measurement and control of the catenary height, as well as misalignment, are key elements in railway network performance in order to prevent tension problems. Geometry measurements are achievable at a precision level of one centimeter through a continuous automatic algorithmic analysis of LiDAR point cloud data, allowing several hundred kilometers of line to be surveyed in a few hours. The detection of catenary posts also allows for the automatic generation of location plans over large distances for work operatives.

4. Ballast recycling through the calculation of surplus or deficit zones

The ballast profile is a key reference indicator, which is verified during the replacement process. We calculate from LiDAR data the real ballast profile and subsequently compare it to the reference profile, which can then identify ballasts zones of surplus or deficit. These are georeferenced and their volume is calculated to allow the infrastructure manager to proceed with recycling or relocating surplus ballast areas. This represents an important economic gain while, at the same time, developing an internal circular economy.

We are currently working to improve network safety through the monitoring of objects which may be unintentionally left on the tracks following repair work, for example. The detection of these objects, which could be, for example, sections of rail or ties, are detected by comparing the differences between two-point cloud datasets acquired a few weeks apart. In this way, it is possible, after filtering, to identify and characterise the type of object. The type and location can then be sent to the on-site staff for them to remove and recycle the object. The rapid automatic detection allows for ever faster reaction times and reduces the risk of safety issues and delays due to this type of incident.
SNCF Réseau has heavily invested in digital twin technology to allow for the modelling of the railway network, but also to be used as an interconnectivity tool for its many different computer systems, ensuring the circulation of data and allowing the possibility for calculating, simulating, predicting and disseminating this information to all of the staff concerned, which then allows a case-specific response to be developed, which creates value for the infrastructure manager through new digital processes. 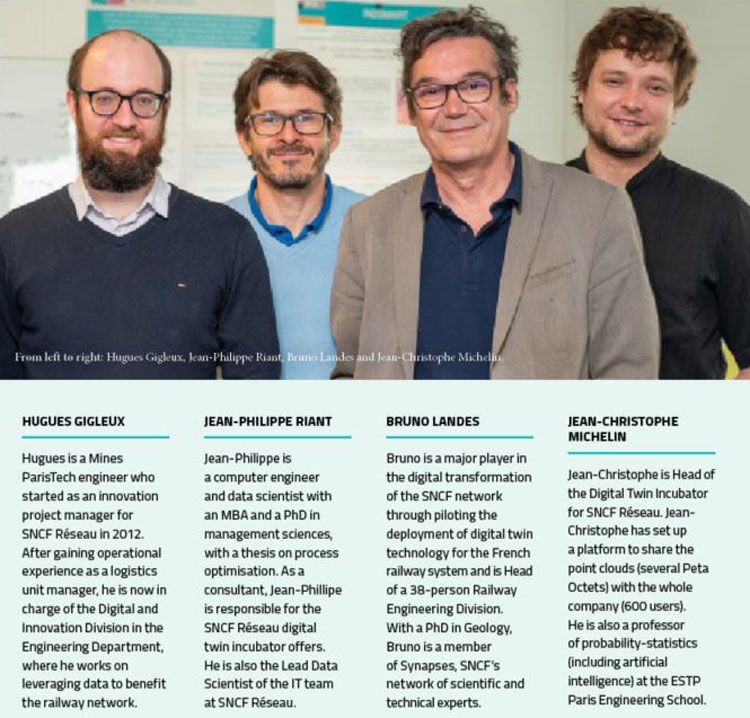