Will new high-speed lines in the North of England transform rail travel?

Tim Wood, Interim Chief Executive of Transport for the North and Northern Powerhouse Rail (NPR) Director, explains how the construction of new high-speed lines across the North of England have the potential to revolutionise rail travel in the region.

This is not a time to scale back on ambition. Now is the time to be bold.

We are at a monumentally important juncture in the North’s history. The coronavirus crisis has impacted the whole country, from bottom to top, but what it has also done is shine a light on the imbalances there are in this great nation.

It is widely acknowledged that the North has been disproportionately affected by COVID-19 compared to other parts of the country, a result of the region having a higher proportion of deprived areas. While the pandemic has savaged certain sectors and potentially changed our way of life forever, it has also provided us with an opportunity to reassess and to build back better in recovery, particularly in terms of transforming rail travel to deliver new opportunities and a better future for the North’s 15 million people.

The Williams-Shapps Review announced recently that a new public body, Great British Railways, will run and plan the rail network, own the infrastructure, and receive fare revenue. A long overdue commitment but, nonetheless, a major national moment toward the betterment of rail travel for passengers, if delivered and funded correctly.

This is a seismic shift in how the railway will be run. To be a success, devolution must be a central pillar to plans as they develop in the months and years ahead.

A refit of the North’s rail network

It is vital that the North’s leaders get greater oversight of services and infrastructure investment to deliver more integrated regional networks that work for all. Locally informed decision-making will prove invaluable, as too will collaboration with bodies such as Transport for the North – we can provide real intellectual horsepower to shape the strategic case for investment in the region.

The review outlines ambitions to bring track and train together in the way it should be, but it only goes so far.

The need for the government to publish the Integrated Rail Plan without delay to provide much-needed clarity around rail infrastructure investment is only heightened. This landmark report promises to spell out how the country will be levelled up through a thorough refit of the North’s rail network and how major schemes like Transpennine Route Upgrade (TRU), HS2 and Northern Powerhouse Rail will dovetail.

The decisions taken over the next few weeks may well define our region’s prospects for the next century and beyond. That is how pivotal it is.

This is not a time to scale back on ambition. Now is the time to be bold. To commit to rail interventions that unlock the huge potential of places across the North. That means full delivery of Northern Powerhouse Rail, HS2 and TRU.

For too long the North’s railway has been creaking at the seams due to decades of underinvestment compared to the south of England and our industrial competitors around the developed world.

Unreliable, often overcrowded, and slow services are commonplace for commuters. Inter-city connections between the main urban centres of the North are poor, a wealth of young northerners constrained in the jobs and opportunities they can access from their own travel to work area. And there is an over reliance on the car to travel, with the majority of journeys only occupied by one person. 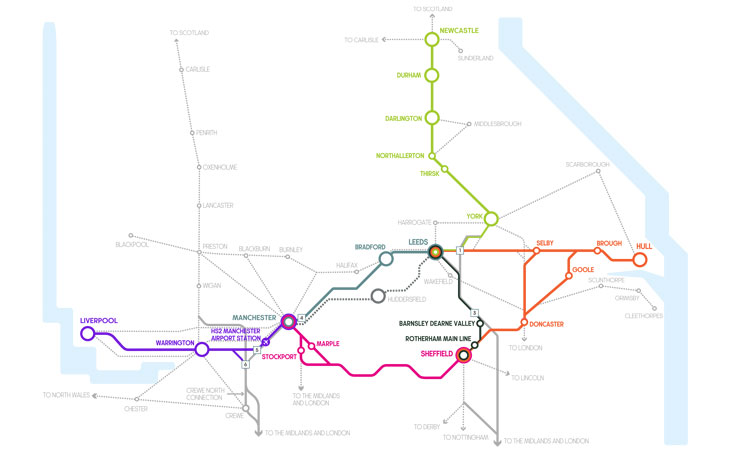 Journey times between Liverpool and Manchester would be slashed to under 30 minutes, with six high-speed services every hour, an additional two trains compared to today.

Northern Powerhouse Rail changes this. By revolutionising the capacity, frequency, and speed of train services between the region’s major urban areas. This transformational set of interventions will create opportunities, kickstarting an upturn in the fortunes of people and businesses in the region.

Earlier in 2021, council and city region leaders in the North – speaking with one voice through Transport for the North – unanimously agreed to a preferred network and phasing plan for Northern Powerhouse Rail.

The network is a mix of new lines and major upgrades, including electrification from Liverpool in the west to Hull in the east. It will feature a new line from Manchester to Leeds via the centre of Bradford; significant upgrades and journey time improvements to the Hope Valley route between Manchester and Sheffield; a new connection from Sheffield to HS2 and on to Leeds; significant upgrades and electrification of the rail lines from Leeds and Sheffield to Hull; a new line to be constructed from Liverpool to Manchester via the centre of Warrington; and significant upgrades of the East Coast Mainline from Leeds to Newcastle (via York and Darlington) and restoration of the Leamside line.

The job market for employers and employees will be widened beyond comparison, particularly for those in and around key stations.

Journey times between Liverpool and Manchester would be slashed to under 30 minutes, with six high-speed services every hour, an additional two trains compared to today.

The job market for employers and employees will be widened beyond comparison, particularly for those in and around key stations. Take Leeds for instance, nearly three million more people and 77,000 more businesses will be within 90 minutes of the city region. That transformational impact will be replicated across the North, opening up job opportunities and attracting investment to ultimately stimulate economic growth, helping us break the shackles from four decades of underinvestment.

Committed to in full, Northern Powerhouse Rail will deliver up to £14.4 billion a year in total gross value added to the economy by 2060; around 74,000 new jobs in the North by 2060; and an additional 12,250 seats per hour in the morning peak travel time. It promises a greener future too, with up to 58,000 cars taken off our roads every day.

Northern leaders’ vision for rail travel is bold and it is ambitious. But it is also a long-term solution to put right what has become a chasm in our national economy between the North and London and the south east.

Northern Powerhouse Rail’s impact will transform rail travel, ushering in a modern, fit-for-purpose system that is unrecognisable. However, it is more than that. It boosts our economy, reduces our carbon emissions, and delivers tangible benefits to people’s quality of life.

Reaching this point in development has been a true collaborative effort, by working in partnership with the Department for Transport (DfT), HS2 Ltd, Network Rail and local transport authorities. We are on the cusp of securing the right solutions that the North will still be benefitting from in 100 years’ time.

That is why we say to the government – we’ve done the work together, so let’s deliver for the North together. The time is now. This is how we build back better.

Tim Wood has over 25 years’ experience in railway design and delivery. He has previously held two rail director positions in the private sector and is known for early development of rail private public partnership schemes, as well as partner and stakeholder management. Tim’s current role is to drive transformational economic change within the pan-northern area of the rail system, with a primary focus on improving connectivity between the six major city regions in the North and Manchester Airport.