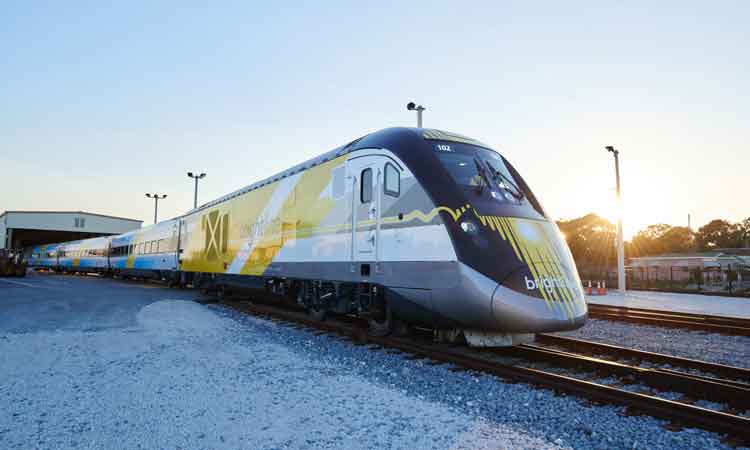 At Brightline, we are reimagining the ride, and alongside it we are committed to improving the environment and the communities we serve. From supporting the use of solar power at our stations to working towards operating completely carbon-free rides; we know every choice we make has an impact, and we are proud to be focussed on making all the right ones.

By using clean biodiesel and emissions (after treatment) to power our locomotives, Brightline is on track to realise carbon-free rides. This results in removing 72K metric tonnes of CO2 emissions from the communities we serve every day and helps to remove three million cars from roads each year. Travelling by our train is also 378 per cent more efficient than a car, and 44 per cent more efficient than a plane. You can reduce your carbon footprint by 59-83 per cent taking the train over other forms of transportation.

Here is a breakdown of what travelling by a Brightline train vs car or plane looks like:

As gas prices continue to increase and the global impact of CO2 emissions becomes more evident every day, Brightline is focussed on providing millions with a more viable, greener, and convenient transportation solution.

We source our biodiesel locally from Florida Power and Light out of West Palm Beach. They provide a custom blend for Brightline, designed specifically for our locomotives. This diesel emission fluid (DEF) is used to chemically convert the oxides of nitrogen to nitrogen gas and water. That is what makes Brightline so clean on the emissions side, and as a result, you have a high‑functioning product that comes at a low footprint.

What you need to know about Brightline’s trains

Every Brightline trainset is powered by two locomotives, with one on each end. The train will never have to turn around; it just runs back and forth. Having two locomotives provides backup power in case one engine fails and keeps the A/C blowing in all conditions. Also, the locomotives are modular; the roof can be easily removed, and every major component can be lifted out and replaced.

Brightline operates the most environmentally friendly biodiesel-electric trainsets in service. Its locomotives meet the highest emission standards set by the federal government.

The train is powered by a 16-cylinder, 4,000hp Cummins EPA Tier-IV compliant diesel-electric engine, and there is one in each of the trains’ two locomotives. That is a hugely powerful engine which is known for how cleanly and quietly it runs.

Brightline West will be fully electric and the cleanest high-speed train in the U.S.

Brightline also has plans for a high-speed rail out west, called Brightline West. This future Southern California service will utilise fully electrified trainsets and we intend to maximise the power generated by renewable energy sources, such as solar and wind, which is expected to provide even greater reductions in transportation‑related greenhouse gas emissions. Running with zero emissions, it will be the cleanest high-speed train in America and will reach speeds exceeding 180mph. This high-speed train model is based on an existing European high-speed train design.

Brightline is taking eco-consciousness and zero emission operations to the next level through its mobility as a service, Brightline+.

As the most significant enhancement made to Brightline since its inception, the Brightline+ service enables passengers to leverage an upgraded Brightline mobile app to plan, book, and pay for their entire journey across a variety of eco-friendly transport modes, leading to a lower environmental impact. These vehicles include Brightline+’s fleet of Tesla cars, shared electric vans, and Circuit neighbourhood electric vehicles (fully electric shared shuttles). All Brightline+ vehicles will be operated by private chauffeurs vetted and trained by Brightline and its mobility partner, Via, the global leader in TransitTech. Customers who choose to use their own vehicle to arrive at the station can pre-book and pay for their parking through the app; they will use the QR code on their boarding pass to enter and exit the parking garage.

Tom Rutkowski has extensive experience in train maintenance and design, as well as facility operations and design. After arriving at Brightline in November 2014 (then named All Aboard Florida), Tom was tasked with the design, construction and commissioning of rolling stock as well as the maintenance facilities in West Palm Beach and Orlando. After successfully launching Phase 1 of Brightline service between West Palm Beach and Miami in 2018, Tom has been working on extending the service to Orlando and beyond. Phase 2 rolling stock is in production at the Siemens facility in Sacramento, CA and the Orlando facility began construction in May of 2019. Prior to joining Brightline, Tom spent over 20 years with NJ Transit spending the last seven years as the General Superintendent of Equipment.