An insight into TRAINOSE restructuring

TRAINOSE S.A was established in 2005 as a subsidiary of the OSE Group (the Hellenic Railways Organisation) responsible for the provision of passenger and rail freight transport. Since then it has undergone significant restructuring in order to meet EU regulations. Strategic Planning Senior Adviser Nikolaos Athanasopoulos gives an insight… 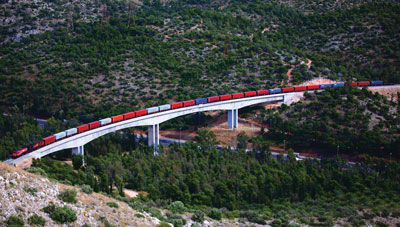 In 2007, TRAINOSE became fully operational and took over the services of the Athens suburban railway company. In 2008, the 100% share capital of TRAINOSE was transferred to the Hellenic Republic (HR) and since then TRAINOSE operates independently from the OSE Group as the only railway transportation provider in Greece, with suburban, national and regional routes. From 2007 to 2009, TRAINOSE had an operational deficit (annual) of €240 million. In 2010, a two-year restructuring plan was designed, which was gradually implemented. In 2012 the restructuring of the company was successfully completed and TRAINOSE presented earnings – for the first time in the Greek railway history – of €0.3million EBITA. In 2013, TRAINOSE shares were transferred to the Hellenic Republic Asset Development Fund (HRADF).

As the Greek railway business was gradually segregated into different companies – each with a distinct line of business, as per the EU regulations – the objective of TRAINOSE is to provide passenger and rail freight services. Its sources of revenue come from passenger and rail freight transportation, as well as the compensation from HR, Public Service Obligations (PSOs) for the non-commercial routes.

TRAINOSE has a unique positioning in the Greek rail market being the leading market operator and keeping the first-mover advantage in a market with special characteristics. It has secured business for the provision of passenger services for the next five years through the PSO contract and, having implemented a successful restructuring plan, it is now a profitable operating company. In the passenger sector, the significant network upgrades as of 2017 will lead to substantial capacity, higher speeds, and significantly lower costs rendering train transportation more competitive to that of other means. In the freight sector, the connection of railway infrastructure to Greek ports is expected to bring significant potential as the ports are uniquely positioned to serve as gateways for the transportation of goods coming from the Far East to South-East and Central Europe. Additionally, longterm freight agreements for regular routes from the ports of Piraeus and Thessaloniki are expected between TRAINOSE and domestic enterprises.

Nowadays, TRAINOSE operates on the Greek rail network which runs from South to North, serving the largest cities in the country. A large part of the network is single line and non-electrified. Currently, the local railway sector is undergoing a significant transformation: a major construction programme is underway and major works are expected to be completed by 2017 which will lead to a fivefold increase of network capacity and increased railway services.

This programme comprises, among others, the Athens–Thessaloniki–northern borders construction of a new high-speed double-track line, spot improvement and upgrade of railway lines plus complete electrification as well as signalling and telecommanding finalisation. When finished, this major construction project, which is expected by the end of 2017, will bring certain advantages for TRAINOSE: in freight transport, the operational and maintenance railway costs are expected to be reduced due to electrification. Line capacity increases as well as an increase in the distances of freight transport services are also expected due to the increase of train speeds. In passenger transport, the travel times on the Athens–Thessaloniki axis will be significantly reduced which will increase railway competitiveness and provide capabilities for different rail services such as express and rapid trains for example. Capabilities for development of effective international services from Athens to FYROM and Bulgaria will also be enabled.

A major milestone in the railway infrastructure evolution came with the finalisation of a 17km-long line which connects Ikonio Port in Piraeus with the Thriassion logistics centre as well as with the entire Greek railway network. This line has already started boosting freight activity from the increased absorption of containers transported through the port of Piraeus, the leading maritime transportation hub in the Eastern Mediterranean. TRAINOSE’s has the opportunity here to become the main rail service provider in South Eastern Europe, by serving efficiently the global supply chains from the Far East to South Eastern and Central Europe through the port of Piraeus.

To effectively serve the hinterland markets, Piraeus is complemented with Thessaloniki port which is 500km closer to these markets, and for which the distance to the northern border of Greece is less than 100km. The port of Thessaloniki is connected to the railway network and it is a critical export and transit port and, historically, the main sea hub to the Balkan hinterland; it handles over 1.6 million tonnes of cargo per year and 370,000 TEUs containers.

The current passenger transport services of TRAINOSE includes the Athens–Thessaloniki–Alexandroupolis main axis line which connects the main urban areas and large cities of the Greek territory, the Athens suburban network with more than 130 line services which serve a large number of citizens who are transferred efficiently between downtown and the Athens suburbs, the Thessaloniki suburban network connecting Thessaloniki with Western Macedonia and Central Greece, and finally regional and metric gauge line services. On the Athens–Thessaloniki axis, the rail modal split is approximately 30% according to 2013 data, providing the significant advantage of safe, cost-effective, downtown-to-downtown passenger transport.

Ticket purchases are performed through the following channels:

In terms of pricing/discount policy, pre-bookings, e-ticketing and round-trip ticket reservations are encouraged. Moreover, a reward programme which is currently in its pilot stage is available to members who purchase their tickets online; points are credited to their accounts with every online ticket purchase, which can be redeemed in various ways.

A number of recent initiatives will provide a substantial positive influence on rail freight traffic in the following years, including:

The finalisation of Ikonio Port in Piraeus to Thriassio connection provides freight activity increase via rail and enables the opportunities of strategic synergies with multi-national companies such as Cosco for the mass transportation of containers on a standard basis via scheduled line services which efficiently serve the supply chains from Far East to Central Europe (Czech Republic, Slovakia, Hungary) through the Ikonio Port, significantly reinforcing the latter’s profitability.

The initiation of an intermodal cargo service with the support of SEV (Hellenic Federation of Enterprises), the Intermodal Cargo Shuttle (ICS) a door-to-door freight transport service connecting Athens (Thriassio) and Thessaloniki, plus Piraeus and Thessaloniki Ports in a daily basis operates since December 2013 following the actions to increase the share of domestic freight transport. ICS is adapted to the market needs in terms of transported units, costs and pick-up/delivery time. The option for door-to-door service is also available through the cooperation with trucks for the first/last mile.

The current vision of TRAINOSE can be summarised as the following:

Given these facts and the market position of the company, and in combination with all recent initiatives in the freight sector, including infrastructure upgrade as well as the strategic synergies created with multi-national companies towards the provision of effective multi-modal freight transport services through port-rail cooperation, TRAINOSE aims to become the main rail service provider in South Eastern Europe by efficiently serving the global supply chains from Far East to the South East and Central Europe through Greece, and achieving competitive travel times from Piraeus Port to selected European cities (e.g. Sofia within 24hrs, Belgrade within three days, Istanbul within 36hrs, and Wien with four days, etc.). This new reality is expected to broaden the pivotal area of TRAINOSE and expand it from Mediterranean to Baltic Sea and from Adriatic to Black Sea enabling the deployment of an efficient hub network of multi-modal freight transport services.

Dr. Nikolaos C. Athanasopoulos received M.Sc and Ph.D degrees from the School of Electrical and Computer Engineers of the National Technical University of Athens in 2001 and 2006 respectively, all within the Division of Information Transmission Systems and Material Technology. Since March 2013, Nikolaos has been the Strategic Planning Senior Adviser at TRAINOSE S.A, responsible for total supervision of the Strategic Planning Directory of the company. His professional career has focused on information technologies and telecommunications, initially as Research Associate, PhD Candidate (2002–2006) and as Post-Doctoral Researcher (2006–2008) in the Institute of Communications and Computer Systems (ICCS) and in the Microwave and Fiber Optics Laboratory of the National Technical University of Athens. Between 2008 and 2009, Nikolaos worked as a Primary Engineer, PhD in the private sector. During the period 2009–2012 he was Temporary Lecturer in the Department of Electronics, Faculty of Technological Applications and Post-Doctoral Research Fellow in the Wireless Communications and e-Applications Research Group of the Technological Educational Institution of Athens. From April 2010 to March 2013, Nikolaos was Vice President and Executive Member BoD of TRAINOSE S.A while in parallel, from May 2012 to March 2013 he was officiate Strategic Planning Director of the company. Nikolaos has been participating in a number of European and national Research and Development projects and he has approximately 40 publications in international journals and conferences. He is Member of the Technical Chamber of Greece and a Member of the Computers and Telecommunications Permanent Committee of the Technical Chamber of Greece.