Never before has there been so much talk about the railroad in Sweden, writes Björn Westerberg, CEO of the Association of Swedish Train Operating Companies (ASTOC). Train services have been developed and adapted for a market with high standards and are an important part of society. Unfortunately, it is the flaws of the railway’s facilities that are in focus. Instead of visions and new developments, there are talks about the ‘maintenance mountain’ and infrastructure debt… 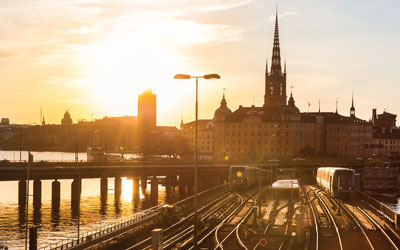 Sweden, and our environment, continues to evolve. Economies globalise, populations grow, urbanisation increases and digitalisation moves faster. The development of the Swedish society has led to fewer and larger regions, increased commuting between and within the major regions and a vital export industry with an increased flow of goods from large parts of the country. The service society has increased the need for skilled labour and acceptable conditions for work, study, and culture. Sweden is one of the most deregulated railway markets in Europe and the European Commission is striving to promote the Swedish system as a role model for the Fourth Railway Package. The next step in the development of the Swedish society requires a sustainable, rapid, comfortable and efficient transport system.

Sweden needs to strengthen its identity as part of a leading European development region, at the forefront of innovation and modernity. To keep up with the development and to strengthen Sweden’s competitiveness, we are forced to change. A major challenge will be to achieve both a more efficient use of resources and to become more flow-efficient. How we develop our transportation system will be crucial to how well we succeed in meeting future challenges and opportunities of the country.

The most recent National Plan for the transport system was labelled as a historic investment in infrastructure. But in the planning process to proceed with the National Plan, the Transport Administration started off from the current situation and just extrapolated forward in time.

The plan therefore lacks clear policies for how rail will be able to help create the future society we want to live in. The risk is great that the future railway in Sweden is unable to deliver the traffic that the society will demand. Sweden is one of the most deregulated railway markets in Europe and the European Commission is striving to promote the Swedish system as a role model.

In the short-term, we must increase the railway’s quality in terms of the railway infrastructure, improved punctuality, improved traffic information, more efficient and faster maintenance operations and not implementing ERTMS until the system is fully developed.

We also need to increase the competitiveness of the railway by avoiding competition restrictions and cost increases (increased track access charges), discourage unhealthy competition from truck traffic, create business and balanced contract terms and enhance the image of the railroad as well as creating an improved organisation of the railway sector.

Capacity-wise, we need to improve the rail infrastructure where the need is greatest, removing bottlenecks, ensuring efficient logistics chains for industry as well as building the new high-speed lines with a focus on end-point travel.

High speed lines will be good for Sweden and the environment. There is a broad political majority to build new high-speed lines between Stockholm and Gothenburg/Malmö. To maximise the socio-economic profitability of the new high-speed lines, it is important that there are clearly articulated objectives of the investment. ASTOC agrees with the government that primary investment objective is to connect major cities by significantly reducing the travel time between Stockholm and Gothenburg and between Stockholm and Malmö. The initiative will promote increased travel by rail and can thereby contribute to lower carbon dioxide emissions from traffic. The focus on high-speed lines has the potential to be really positive for all stakeholders, but this requires a comprehensive approach with a clear target for the entire high-speed system. ASTOC sets out a number of requirements for the new lines.

First of all, to choose separate systems and avoid regional traffic on high-speed tracks – this is because the end-to-end travel time is of the utmost importance to increase travel and thus being able to transfer passengers from air to rail and better to be able to achieve both climate and transport policy objectives. The travel time will determine whether travellers choose high-speed rail over airlines or the car. To achieve a high market share, the travelling time must be 50% of car travelling time and 30 minutes faster than taking a flight, including connecting journeys between urban centres.

The high-speed project has been ‘inherited’ and transferred and now includes two previously started projects – the Eastern Link and Mölnlycke-Bollebygd. They are both largely designed as regional tracks connecting airports. This entails a great risk of a negative impact on punctuality and capacity available for travel between the major cities. The design of these projects need to be reviewed and adjusted based on a clearer vision for a Swedish high-speed systems.

Then there’s high punctuality and robustness – to achieve at least 95% punctuality of the entire system between the cities. The few disturbances that may occur must be as short as possible as not to upset the confidence and the trust of the train services as a credible alternative to flying or travelling by car.

Also, possible changing times at stations between trains and between trains and buses/trams should not exceed 10 minutes. To achieve this, effective interchanges should be sought. Furthermore, all stations must be designed so that trains can stop at the same time, plus additional tracks should also be planned.

ASTOC requires building the new high-speed tracks all the way to the city centres of Stockholm, Gothenburg and Malmö, with clear priority rules during disturbances and at the connection points to the existing lines. It is important to establish a ceiling on capacity utilisation so that there is room for recovery after a possible disturbance and each line needs to be completed at a similar time so that high-speed services can run all the way from the start of the first line.

There should also be reasonable commercial conditions including track access charges that are optimised to generate increased traffic and revenue growth that enables operators to make the multi-billion investment in trains that needs to be done.

Let us now join forces in the work of the next National Plan to create a new phase of growth for the railways. With the right measures and means we can double freight traffic and triple passenger services by 2050 – so let’s start the work to build the society we want to live in.

Björn Westerberg has been the CEO of ASTOC – the Association of Swedish Train Operating Companies – since April 2015. Previously, Björn held the position as Director of Strategy & Business Planning at SJ AB where he also was in charge of the High-Speed Train Programme and the ERTMS Programme. Björn is a former partner at a technology strategy advisory firm and has more than 15 years of strategy consulting experience. He has also held general management positions at a listed IT Professional Service firm. Björn holds business degrees from Stanford Graduate School of Business (Sloan Fellow), Stanford University and the Stockholm School of Economics. Björn also received the PAUSE Scholarship in Japanese Management to Sophia University in Tokyo, Japan.

One response to “Sweden’s Railways: Quality, capacity and competitiveness”