The challenges of integrating the South American railways

Integrating the infrastructure of different transportation modes is now an irreversible trend. However 150 years ago, when the implementation of the railways in South America began, nobody envisioned the benefits that integrated planning would bring to the development and the economy of South American countries… 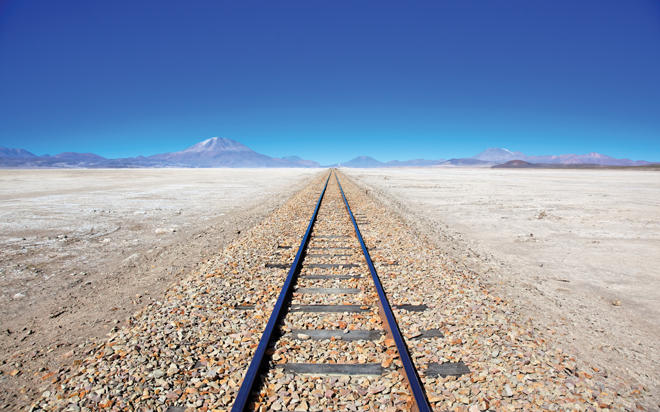 We are now in the 21st century and the lack of transportation options and logistics problems are still major impediments to the stimulation of trade in the region. South American countries currently receive 16% of Brazilian exports – a figure far below their real potential, considering the potential 11 South American trading partners.

The current scenario of South American logistics hinders the efforts of its countries to strengthen their business ties through the negotiation of trade agreements and the formation of regional blocs. The weaknesses of the South American transportation infrastructure, particularly in the Southern Cone, are now a greater barrier to regional trade than customs duties.

Currently South American railways, which have always played a major role in the transport of primary export products such as iron ore and agricultural commodities, continue to fulfil the same role due to a number of factors that have prevented their development. These include the concentration of investments in roads, different track gauges, disadvantaged geography, and management problems.

For these and other reasons, railway integration between countries is still a distant reality, although there are great opportunities to increase the participation of railroads on the trade flows. To accomplish this goal, there needs to be greater multilateral, political and financial understanding to overcome the barriers to railway transportation, as well as more investment in the intensive use of rail transportation, whether it be freight or passengers.

We can consider the long land distances as one of the most challenging aspects, as the South American continent has an area of 17.8 million square kilometres. Such scale makes the Andean region and the Atlantic coast – where most of the economic activities and the highest population density are concentrated – distant islands. For instance, the land connections between Brazil and the other countries in the region, if any, consist of roads that are often problematic and cover distances of up to 6,000km between the regions with the greatest economic and population concentration.

The significant distances would be no trouble if the Southern Cone countries had appropriate routes between them.

Another example is the sea distance between the ports of Santos, in Brazil, and Callao, in Peru, which reaches 4,758 nautical miles – a distance greater than between Santos and the Port of Miami in the United States. Therefore, it is faster and cheaper to move goods from Sao Paulo to Miami than from Sao Paulo to Lima, which makes the logistics of trade between the South American east coast and the north-west virtually impossible.

Venezuela, Colombia, Ecuador and Peru have no rail connections among them. Argentina and Chile, despite the fact that they share 5,300km of borders and trade more than $5 billion every year, do not resort to railroads in their bilateral trades. Between Argentina and Brazil the change of track gauge prevents trains from directly crossing the border – which requires transhipments – and the same happens between Brazil and Uruguay.

Brazil is a country of continental dimensions, with a population exceeding 200 million people, but relies solely on approximately 28,000km of rail tracks. The country faces major challenges concerning the development of transportation infrastructure, both of general cargo through containers and passengers as well.

The concession of the former Rede Ferroviária Federal (RFFSA) railway network in the 1990s to the private sector led to the signing of contracts that will begin to expire in 2026. The country is now going through a period of negotiation to anticipate the extension of such contracts, in order to improve the model previously used, ensure the provision of the most appropriate and efficient transportation service for users, and allow the planning of investments in the sector.

In recent years the Brazilian government has announced investments of over BRL 90 billion into railway projects to interconnect the countries. Unfortunately, due to the successive changes proposed and the difficulty of structuring a business model that attracted investors, not a single kilometre of rail has been granted so far.

To illustrate, the Brazilian railroads were planned with the basic orientation of connecting the country’s inlands to the exporting ports and the frequent changes of track gauges prevented the movement of trains throughout the full length of the networks. At the time, governments and private investors did not perceive railways as a means of integrating routes of national markets, or as instruments of commercial approach among countries.

There is no doubt that railways are the most viable option to overcome land distances if economic and environmental aspects are taken into account.

Although the integration of transport networks is part of the agenda of these countries, the majority of Brazilian exports to South American nations are transported by sea and road routes, which account for 53% and 39% of the total, respectively.

Therefore, we must ask: would it be possible to turn railways into a regional integration tool and an alternative to road transport? What projects would be priorities for increasing the competitiveness of the region? Is the possibility of integrating the South American railways and the Southern Cone countries feasible?

The challenges of integrating the South American railways are significant due to geographical, historical and market factors, but such integration must begin with a pragmatic agenda of short and medium-term initiatives. These include determining the investments that have the greatest potential for competitiveness gains, as well as carrying out specific actions to achieve a more efficient exchange between networks in the border regions (even with different track gauges), as well as greater exchange of information and more feasible objectives.

Guilherme Quintella headed one of Brazil’s largest soybean trading companies in Brazil for 19 years. In 1990 he was elected Railway Man of the Year by Revista Ferroviária, a leading Brazilian magazine in the sector. In 2003 he founded EDLP – Estação da Luz Participações – where he still remains to this date. EDLP operates in the development and structuring of projects related to sustainable transport logistics. Guilherme is also the Latin America Chairman for the International Union of Railways (UIC).

European Railway Review’s next international instalment will focus on developments in the Middle East and North Africa. Make sure you receive Issue 4 2016 published in July 2016 by becoming a subscriber today – visit www.europeanrailwayreview.com