The aim of Regulation (EU) No. 913/2010 of 22 September 2010 is to improve the efficiency of rail freight transportation relative to other modes of transport through the creation of nine European rail freight corridors. Here Eduardo Borges Pires, Director of Infraestruturas de Portugal’s Mobility and Clients Department, provides an overview of the current status of the Atlantic Corridor that connects Portugal, Spain, France and Germany. 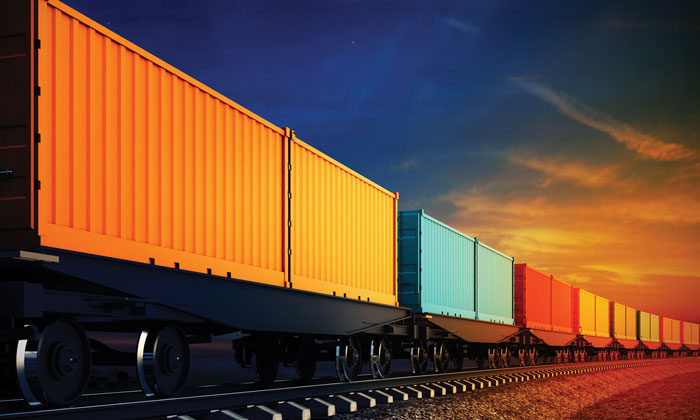 With a total of approximately 6,200km of existing lines, it includes mixed characteristics of rail infrastructure, including the following:

The Atlantic Corridor directly connects four other corridors: the ‘North Sea–Mediterranean’ in Paris and Metz/Woippy; the ‘Mediterranean’ in Madrid and Zaragoza; and ‘Rhine-Alpine’ in Mannheim. In the future it will connect with the ‘Rhine Danube’ Rail Freight Corridor in Strasbourg and Mannheim.

The Atlantic Corridor crosses the major urban areas of Mannheim (Germany), Paris (France), Madrid (Spain), and Lisbon (Portugal), where the major terminals for international rail freight traffic are located. Furthermore, it includes approximately 1,090km of overlapping sections between the Atlantic Corridor and other corridors. 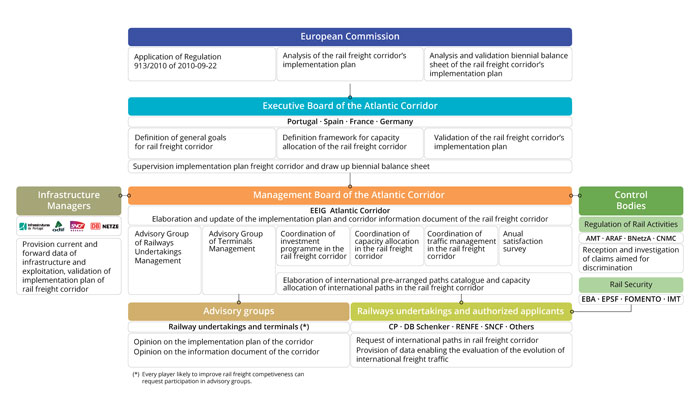 The Management Board of the Atlantic Corridor takes the form of a European Economic Interest Grouping (EEIG) composed of the representatives of the infrastructure managers IP, Adif, SNCF Réseau and DB Netz AG. The headquarters is in Paris.

The Atlantic Corridor has established a representative ‘One Stop Shop’ in which Adif acts on behalf of the four infrastructure managers. The Corridor One-Stop Shop (or C-OSS) is placed in Madrid and is supported by a coordinating IT-tool (PCS – Path Coordination System).

The C-OSS is at the disposal of applicants to coordinate the process of capacity allocation, in addition to facilitating basic information on traffic management and the use of the freight corridor.

The Atlantic Corridor provides dedicated capacity for international freight trains in the form of Pre-arranged Paths (PaPs) and Reserve Capacity. PaPs are defined in accordance with specific parameters such as load, length or locomotive type and are organised and presented in logical geographical sections.

The C-OSS accepts capacity requests from railway and non-railway undertakings, adopting the definition of ‘applicant’ mentioned in the Directive 2012/34/EU.

The information concerning the capacity and traffic management procedures referred to in Articles 13 to 17 of the Regulation are included in the Corridor Information Document (CID).

Besides the C-OSS activity, the Atlantic Corridor has carried out a number of studies, the most important being the following:

Currently the Atlantic Corridor has an ongoing study called ‘Rail Freight Corridor Observatory’. Its aim is to improve the annual monitoring of the economic evolution of the Corridor through comparative results, with the estimations made every three years in the Traffic Market Study.

However, the success of the Corridor would not be possible without the cooperation of other entities. Cooperation with the European Commission has materialised through funding subsidies, either from the TEN-T Programme or the Connecting Europe Facility (CEF).

Such European funding subsidies have helped incrementally and will assist the Management Board of the Atlantic Corridor in the future with improving the competitiveness of international rail freight traffic by offering more capacity to the market, better communication and higher performance.

Cooperation has also been established with RailNetEurope (RNE) who provided support to the infrastructure managers during the implementation of the RFCs following the publication of Regulation (EU) No. 913/2010. Several RFC guidelines have been jointly developed and delivered in order to facilitate this process and also to provide a harmonised framework for their operation.

In order to further strengthen the cooperation between the RFCs and RNE, the RNE-RFC High Level Group has been introduced and they have been offered associate membership to RNE. RFCs joined RNE as Associate Members on 6 May 2015, thus they are invited to participate at the RNE General Assembly.

Several RFC-related projects were successfully carried out jointly under the RNE umbrella. In addition to the harmonised business and operational processes, RNE also develops and operates a number of IT tools in order to further help facilitate and promote the international railway business along the RFC network:

Looking ahead, the goal of the Atlantic Corridor is to triple the amount of international rail freight traffic over the next 20 years, as planned in the transport market study by offering the following:

In order to achieve this goal the Atlantic Corridor will continue to focus on the following points:

With an increase of 31% in sold-capacity of the 2017 Timetable (in relation to the 2016 Timetable), the Management Board of the Atlantic Corridor will pay more attention to the expectation of the railway undertakings, authorised applicants and terminal operators in order to fulfil their market needs. Since December 2015 Eduardo Borges Pires has been Director of the Mobility and Clients Department within the Strategic Marketing Management section of Infraestruturas de Portugal. Eduardo graduated in Civil Engineering with a Post-Graduation in Transport and is also the Deputy Director of EEIG ‘Atlantic Corridor’.