Track and new stations continue to take shape on Crossrail

It’s a really exciting time on the Crossrail project. The focus has changed from building incredible structures to designing, installing and commissioning a series of end-to-end railway systems. With the overall programme now more than 75% complete, Chris Binns, Crossrail’s Chief Engineer, explains in this article that fit-out at stations is well underway and the logistics of installing massive volumes of equipment in underground tunnels and rooms provides new and different challenges. 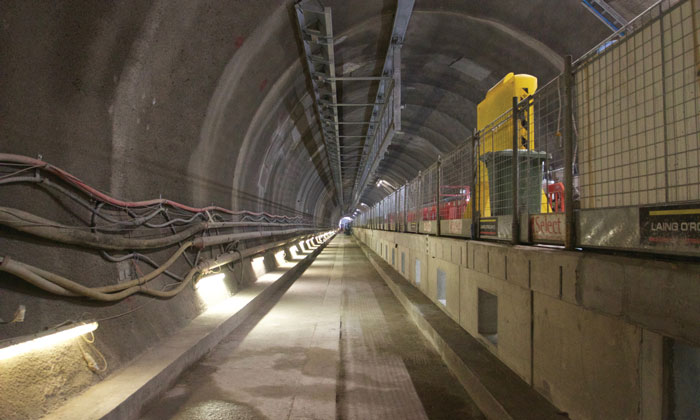 With station fit-out and the installation of underground equipment progressing well, attention is now also moving to other areas. These include the completion of technical assurance documentation and preparation for testing and commissioning, as well as platform screen door installation, switch-on of power supplies and the completion of the fibre optic backbone network.

At the 10 new stations the focus is on handing over completed equipment rooms to the railway systems teams for installation. Across the project there are 1,010 rooms within the new station complexes with 262 of those handovers having been completed. The remaining rooms are due to be finished by the end of March 2017. Room handovers are completed to a specification that sees all the major construction activities finished, cable and ducting routes available and, depending on the room’s function, partially fitted with some services in place.

Station platform structures for the Elizabeth line are now complete at all the new stations apart from Whitechapel, which is scheduled to be the last. The Whitechapel station team has meanwhile been delivering some of the most complex interface works at this interchange with the District and Hammersmith & City Underground lines, as well as London Overground’s East London line. Throughout 2016 the works that were completed during possessions have changed the configuration of the existing platforms and interconnecting passageways and staircases – an interim station entrance was opened successfully on 18 January 2016. This interim entrance diverts passengers away from the old entrance to allow for its partial demolition and alteration, enabling the new high level concourse connections to be installed through to the new Elizabeth line entrance. While the scale and complexity of building 10 new stations gains lots of public attention, the connections and interchanges between these new and existing stations across central London are some of the most complex to deliver. We work closely with our neighbouring communities, the travelling public, adjacent businesses and traders to help everyone adapt to the changes. At Whitechapel the relocation of the existing station entrance has breathed new life into Court Street, as businesses attract people on their way to the interim entrance.

One of the key safety features of the new Elizabeth line stations in central London, Canary Wharf and Woolwich is that the platforms are separated from the running tunnels by a full-height platform edge screen. This screen includes the platform screen doors – similar to those already in use on the London Underground Jubilee Line Extension, but sealing the entire edge from platform to ceiling. This enables sophisticated tunnel and station ventilation systems to create safe, clean-air emergency evacuation routes, as well as preventing hot exhaust air from the trains entering the stations.

The construction sequence for the platform edge screens has been carefully designed. Each station’s project team has built the platforms and platform edge screen components with a temporary, sealed, fire-proof hoarding in place – set one metre back from the platform edge. This isolates the tunnel worksite from the station platform and has allowed the larger running tunnel fit-out trains and machinery to run safely behind the hoardings at the same time as the platform finishes and plant are being installed on the station-side. Running tunnel railway systems activities continue at a pace with track concreting now over two thirds complete.

The final platform screen door assemblies will start to arrive in early 2017 and replace the hoardings once the fit-out work is completed and construction trains no longer need to pass through the station.

The platform screen doors are designed to provide the tightest possible fit with the passenger trains to deliver level access boarding. With 42km of track and systems to fit out, the logistics sequence is complex and the platform screen door installation has been meticulously planned. The installation programme uses a modular approach with a specially designed train to allow fully ass mbled and tested door components to be lifted into their final position and bolted precisely in a slick, rigorously tested operation – one that has been practised off-site at a mockup platform in a railway assembly shed in Wolverton, near Milton Keynes. The platform mock-up is next to the Knorr-Bremse door assembly line, which was set-up specifically for Crossrail and from where all the door modules will be shipped. The three-panel wide modules can currently be installed in about half an hour starting from the wagon drawing alongside the platform edge to the complete door assembly being precision aligned in its final position and bolts torqued up. Like a Formula 1 pit team, the installers are finely tuning their approach and the tools they use to deliver a schedule of six days for each platform edge of 240m length to be fully fitted.

Once the final track is in position, the running tunnel systems are equipped with cable management systems, walkway brackets and the fire-fighting water mains that require hundreds of thousands of mounting holes. Two bespoke drilling machines are being used, guided by 3D laser surveys and containing integral dust extraction equipment. Around 16km of drilling operations have been completed, representing approximately 30% of the total. Cable pulling into the completed cable management systems that will provide the power, lighting, signalling and communications for the railway is well underway.

As we complete the remaining 25% of the Crossrail project, the stations, shafts and portals teams are wrapping up their design deliverables and technical assurance documentation in parallel with the systems fit-out of the facilities. The high voltage power supply network for the stations will be installed and tested ahead of a power-on countdown and the final testing of the new railway infrastructure.

As 2016 comes to a close, our focus is turning to commissioning the complex equipment that’s now being installed and transforming these incredible structures that have been built underneath London on Europe’s largest infrastructure project, into a safe, operable, maintainable and high-performing Elizabeth line. Chris Binns has worked on the £15 billion Crossrail project since July 2015. He is the Chief Engineer and responsible for providing engineering technical leadership through his team of Heads of Disciplines and Managers of Engineering. His remit includes Railway Systems, Mechanical, Electrical and Public Health Systems, Architecture and Civil Engineering works. Chris was previously the Head of Engineering for Network Rail’s £6.5 billion Thameslink programme from 2008 to July 2015, delivering technical assurance for the upgrade of this key north-south railway.