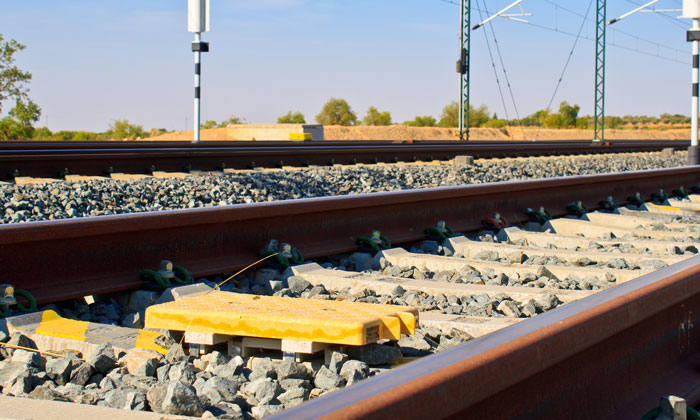 Within the nine initial corridors envisaged by EU Regulation 913/2010, Rail Freight Corridor 61 (RFC6) is the most interconnected corridor in Europe, since it is crossed by six other freight corridors. Otherwise known as the ‘Mediterranean Corridor’, it stretches from Almería–Valencia/Madrid–Zaragoza–/BarcelonaMarseille–Lyon–Turin–Milan–Verona–Padua/Venice–Trieste/Koper–Ljubljana–Budapest–Záhony – and is expected to become a major European freight corridor, linking South-Western and Eastern EU countries. In fact, it represents a key access gateway to the Ukraine and therefore has the potential to divert part of the Europe-Asia traffic flows that currently travel by ship. Therefore, the traffic development along RFC6 must also take account of the significant potential increase in the rail market share and consequent reduction of environmental externalities in terms of reduction of gas emissions and reduction of roads and highways congestion.

The implementation of ETCS (European Train Control System) on corridor routes is one of the fundamental goals that led to the creation of ERTMS (the European Rail Traffic Management System). RFC6 is committed to fulfilling the interoperability criteria defined in the Directive 2008/57/EC. In particular, in order to comply with the control command technical specifications for interoperability, RFC6 is currently deploying ETCS on its lines.

The ERTMS Committee was launched in 2007 following the creation of the EEIG Corridor D. The initial mandate of ‘Creating the conditions for the deployment and the seamless use of ETCS (European Train Control System) on the Corridor’ have been fulfilled by the members by proposing topics to be dealt with to ensure interoperability of ETCS trains. In that respect, several Working Groups (WGs) were defined: Train Categories, Braking Curves, Change Requests, National Values and Harmonization of Operating Rules. The most important result was achieved by the Train Categories WG that produced, in association with Corridor C, a request for additional ITCs (International Train Categories) for ‘other categories’ (Freight train with G brake, Freight train with P brake). The request was accepted by ERA (European Railway Agency) during a workshop and now it is included in SRS (System Requirements Specification) ETCS.

The Regulation 913/2010 envisages, among the responsibilities of RFC6, the development and harmonisation of ERTMS along the corridor. The deployment of the ERTMS along the corridor clearly depends on national decisions and negotiations with EC. On the other hand, according to the experience gained in recent years, it has been noted that the deployment of ERTMS can bring problems related to the lack of harmonisation between neighbouring countries (due to different adopted versions of ERTMS and different technical and operational national rules that have to be taken into account). The EEIG for RFC6 is therefore the appropriate organisation to support the effort at corridor level for the harmonisation of ERTMS technical and operational rules.

Moreover, according to the feedback of railway undertakings, it is necessary to study simplified and harmonised procedures for authorising the vehicles as far as ERTMS subsystem are concerned. Finally, with the ERTMS breakthrough initiative proposed by the European Commission that aims to define short-term achievements and the means to establish a reliable and stable ERTMS system, it is pushing corridor organisations to have a proper structure to deal with it. 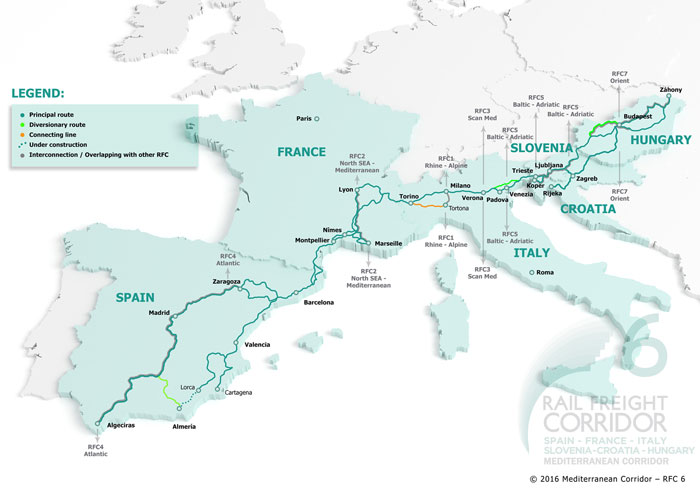 RFC6 is approximately 7,000km-long and the most interconnected corridor in Europe, since it is crossed by six other freight corridors. It is expected to become a major European freight corridor, linking south-western and eastern EU countries, providing a multimodal link to the ports of the western Mediterranean with the centre of the EU. As such the ERTMS operational rules will assume a primary role and for this reason a dedicated Working Group was created.

The WG shall begin by analysing the EU and ERA document to ascertain if and how the rules defined in it can be implemented by the infrastructure managers and railway undertakings on the corridor, and under which conditions to implement them. Any incompatibility shall be highlighted and clearly described. The main deliverable shall be describing the harmonisation principles and the related proposed procedures after consensus within the WG.

This document shall be followed by the description of these principles in each national set of rules. Each document, rule, standard, rule book etc. that should be created or amended to incorporate the proposed principles and procedures shall be outlined. Finally, a national implementation guide shall be produced for each IM and RU to describe the national workflow needed to integrate these creations and amendments in the existing documentation.

ERTMS on RFC6 as a pioneer

RFC6 can also be considered as ‘ETCS Gym’ due to different pilot projects such as Level 2 Baseline 3 on conventional lines in Italy (Milano Lambrate–Treviglio), or the Level 1 International Section Őriszentpéter–Boba (102km) between Slovenia and Hungary and the overlapping L1 & L2 section between Őriszentpéter and Zalacséb (Hungary) where it will be possible to test the dynamic transition of different national applications. In this regard ETCS represents an opportunity for railway undertakings to use their own rolling stock and provide open access, opening up competition and potentially bringing prices at market level.

Until the deployment of ETCS, railway undertakings have to change their locomotives every time they cross a border otherwise they must equip these locomotives with multiple expensive on-board control command systems. The first choice has a negative impact on travel time and on rolling stock management. The second one is expensive. With ETCS, they will be able to use locomotives that can run from origin to destination with a single on-board control command system. This will facilitate improved asset management, save journey time and reduce costs.

Since 1999 Stefano Marcoccio has worked in the control and automation field, configuring and carrying out the implementation of numerous Automatic Process Control Systems in chemical plants. He has been employed at RFI S.p.A since 2003 and is currently a Project Manager in the CCS Department. His focus is following the ERTMS Level 2 Pilot Line, ERTMS L1 Limited Supervision at Swiss–Italian border lines and ERTMS L2 on the Milano–Chiasso line. In 2015 Stefano also became ERTMS Team Leader for Rail Freight Corridor 6.

Andrea Galluzzi graduated in Mechanical Engineering and worked for a management consulting company from 1997 to 2000. From 2000 to 2003 he worked for Alitalia as Maintenance/Ground operations Quality Auditor. Since then he has worked in various railway safety roles at companies including Ferrovie dello Stato, RFI, Trenitalia and within the Regional Transport System. At the end of 2008 he was appointed in Ferrovie dello Stato holdings as Head of Safety and Interoperability within the FS Brussels Representative office. Since 2013 Andrea has been the Managing Director of Rail Freight Corridor 6.

“Regarding the implementation of ERTMS in European Freight Corridors, the industry faces the major challenge of achieving true rail interoperability in the field of signalling. The application of trackside ERTMS (Levels 1 and 2) is desirable for the industry to have a flexible approach to system implementation across different nations. The ERTMS specifications have enabled custom-built systems to meet national requirements, even in accordance with the NSA’s safety regulations. The real challenge is therefore to exploit the potential of ERTMS flexibility and to maintain interoperability at the same time. Therefore, maximum attention should be given to the border lines where dynamic transitions will be performed from one network to another. These lines can be considered the real interoperability test. Currently, several corridor border lines have been equipped with ERTMS and have showed positive results for dynamic transitions.”