Trasse Schweiz: A key player in the Swiss rail sector

Since 2006 Trasse Schweiz has been the independent essential functions body responsible for allocating train paths on 95 per cent of the Swiss standard gauge network. The respect shown by the users of the network prompted the Swiss government not only to base the further organisational development of path allocation on the business model and staff of Trasse Schweiz, but also to delegate additional responsibilities to it. Thomas Isenmann, Managing Director of Trasse Schweiz AG, provides an overview of how the organisation came to exist, the functions it carries out, and its consolidation plans for the future. 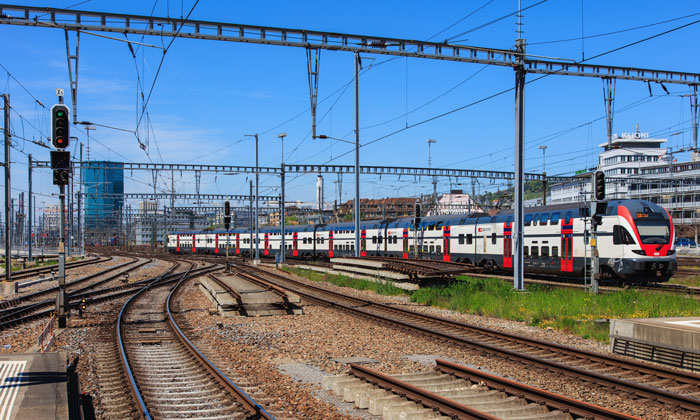 The organisation of the Swiss railway system has evolved over time. The first Swiss Railway Act of 1852 allocated the task of building and running railways to private companies. In the second half of the 19th century, numerous private railway companies sprang up, each with their own rail network. In 1902 the five largest companies, as well as several of the smaller private railways, were nationalised and merged to form Swiss Federal Railways; , however, there remain approximately 50 railway infrastructure managers in Switzerland today – 21 of which operate with standard gauge networks.

In 1999 Switzerland took the first step in reforming its railway system by allowing open access to networks and freeing freight traffic up to
competition. Train path allocation was initially carried out by the infrastructure managers of each integrated railway company in accordance with the provisions of EU Directive 91/440. Due to the fact that open network access was not used much initially, this did not prove to be a problem. In 1999, for example, there were approximately 1,400 SBB freight trains using the SBB network daily, but only about a dozen from other companies.

In 2001 BLS Cargo, however, became the first larger company to operate freight trains outside its own network. SBB and BLS therefore decided to set up a joint train path allocation body and to staff it with employees from both companies. With further freight transport undertakings entering the Swiss rail market from 2004, the government proposed in its 2005 Railway Reform 2 bill that a common path allocation body should be established for the entire Swiss railway network.

However, owing to the controversial nature of the infrastructure funding proposals, parliament sent the Railway Reform 2 bill back to the Federal Council for revision. As a result, the three largest Swiss railway companies decided to take the next step on their own: SBB, BLS and the SOB (Schweizerische Südostbahn) outsourced the allocation of train paths for their networks to an independent company. In January 2006, together with the Association of Public Transport (APT), they established Trasse Schweiz as a non-profit limited company. To ensure the greatest possible independence, no shareholder is allowed to own more than 25 per cent of the share capital, so that no owner has a dominating position. Each shareholder nominates a member to the Board of Directors, although this person must not be from their management board or their traffic department. The Chairman of the Board of Directors is an
independent person.

Responsibilities are based on the specifications of the First EU Railway Package. The Bilateral Agreement on overland transport with the EU commits Switzerland to adopt standards equivalent to those of the first EU Railway Package. Trasse Schweiz is responsible for the allocation of paths on the networks of SBB, BLS and SOB, as well as on the networks of four other infrastructure managers managed by SBB (see Figure 1). This represents 95 per cent of the Swiss standard gauge network and includes all important lines available to competition. 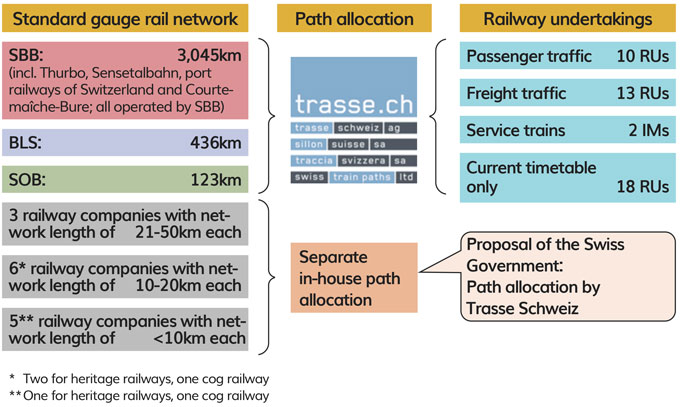 As far as timetable planning is concerned, we mandate SBB Infrastructure to prepare draft timetables. We then supervise the development work and approve the draft timetables, as well as the path allocation, by means of the direct access we have to SBB’s planning tools.

The infrastructure managers are responsible for the stability of the timetable, while we are responsible for ensuring that it is non-discriminatory. A timetable would be considered discriminatory in the following instances: if path applications were rejected without due cause; if the best possible alternatives were not offered in the event of conflicting applications; or if the legal framework (such as the priority system, for example) was misapplied.

We are actively involved in all the process steps in which discrimination could occur. We specify the requirements for the allocation of paths, for example, that the infrastructure managers adopt and incorporate unchanged into their network statements. The work of ensuring a non-discriminatory timetable begins even before train paths are requested. We monitor, for example, timetable studies that the railway undertakings commission from the infrastructure managers whenever they develop new services.

In the case of mutually exclusive train path applications, we lead the coordination process with the aim of resolving these conflicts to ensure all train paths applied for are able to operate. In cooperation with the train path applicants and timetable planners we try to develop alternatives to ensure that all train
path requests can be fulfilled on commercially acceptable terms. For this purpose, we insist upon flexibility from all path applicants regardless of the priority of their applications. The expected flexibility stops where connections can no longer be guaranteed. 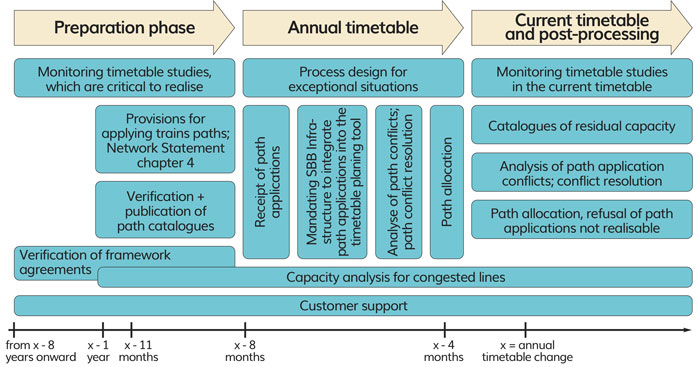 Applications submitted during the timetable year are dealt with on a ‘first come, first served’ basis as long as there is spare capacity; when applications cannot be fulfilled, we try to offer the best possible alternatives. Since we were first established in 2006, we have been able to provide a consensual solution
for over 98% of all train path conflicts that occurred during the annual timetable process.

If we have to reject a train path application for capacity reasons, or if a lack of capacity can be reliably predicted, we declare the route to be congested and undertake a capacity analysis together with the infrastructure managers. For the 2017 annual timetable process, one of the two north-south freight routes – the Basel–Lötschberg–Simplon–Iselle route – was declared officially congested. This was due to a branch line on the other north-south route being completely closed for six months, meaning that the Lötschberg–Simplon route would not have been able to accommodate a diversion of over 40 freight trains per day. By applying a set of measures, we were able to slightly increase the capacity of the route, although we had to accept some loss of flexibility in the process. We also negotiated with the railway undertakings a temporal and spatial distribution of traffic in order to achieve better utilisation of the scarce capacity. Thanks to these measures and the spirit of cooperation shown by the train path applicants, we only had to reject four path applications in total.

Trasse Schweiz is also member of the Rhine-Alpine and North Sea-Mediterranean freight corridors. Here, and in our role within RailNetEurope (the European Association of Infrastructure Managers and Allocation Bodies), we work hard to improve the quality and harmonisation of the rail transport operating  conditions throughout Europe.

A next step in the Swiss government’s railway reform programme – outlined in the Railway Infrastructure Organisation bill presented in November 2016 – is to build upon Trasse Schweiz and consolidate its business model, which is testament to its proven strong track record. A statutory framework will provide a
clear definition of its remit. In order to ensure independence, ownership will be transferred to the federal government and the staff of Trasse Schweiz transferred to a new publicly owned company. The Federal Council will select its Board of Directors and approve the strategic objectives drawn up by the Board of Directors as well as the annual activity report. Beyond that, the company will remain autonomous. Furthermore, the Federal Council intends to extend the responsibilities of the path allocation body and confer responsibility for the management of the infrastructure register and publication of the investment plans of the infrastructure managers.

Thomas Isenmann holds a PhD in Economics. After completing a research project in transport science, Thomas worked in conceptual planning at the Federal Office of Transport for seven and a half years. After a brief career detour into research policy, Thomas then moved to the corporate staff department of Swiss Federal Railways in 2002. He has been the Managing Director of Trasse Schweiz AG since it was established in 2006.