How railway’s past can help develop its future

Andrew McLean, Assistant Director and Head Curator of the National Railway Museum, speaks to Global Railway Review’s Editor, Craig Waters, about the importance of telling the story of railways’ past, present and future, and how the museum’s redevelopment aims to encourage the next generation of rail engineers. 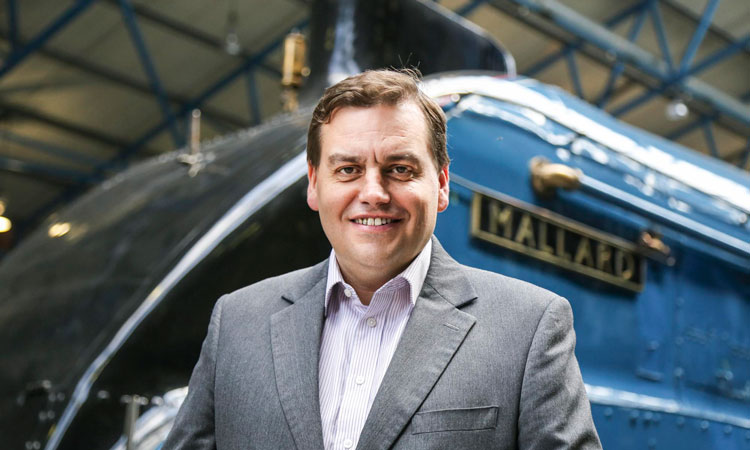 The National Railway Museum is, of course, home to some iconic railway and engineering marvels of the past, but what do you consider to be the future of rail?

What is interesting about my job is that I get to see what people thought the future of rail was going to be going back 200 years ago. More recently, but still a long time ago, our museum has a magazine article written in 1966 which looked at the future of rail and highlighted developments such as Maglev technology.

For me, I think the future of our railways will be even more digitalised

For me, I think the future of our railways will be even more digitalised, and this is already seen with the great improvements in signalling and the impact this is having. Maglev technology has been around for some years, but the first proper long-distance Maglev system is set to be realised in Japan in 2027, with the Chuo Shinkansen maglev line, which is currently under construction between Tokyo and Nagoya. I think the opening of this line and the use of technology will have a similar impact on the world that the original Shinkansen had back in 1964.

I think we’re also going to see the development of more international and long-distance journeys by rail, and that’s going to be transformative – especially when we consider the environmental impacts, of course. 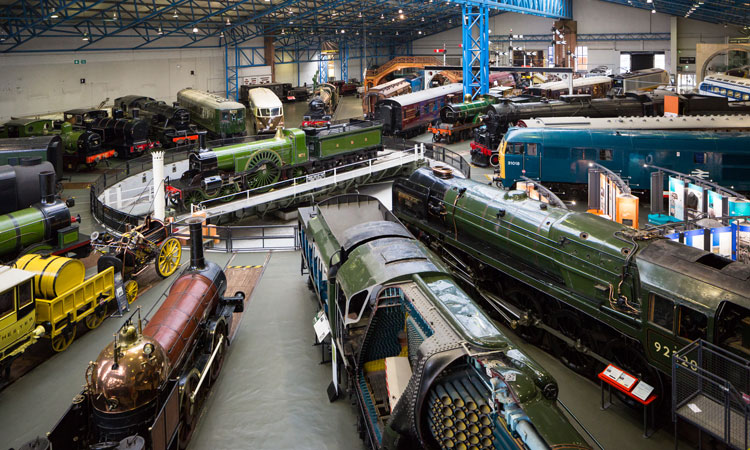 The turntable in the National Railway Museum’s Great Hall

Do you think other modes of public transport are way ahead of the curve compared to rail in terms of being digitally advanced?

I think rail does have to catch up with other modes in some ways, but rail has a huge advantage over all other modes of transport in that nobody has yet devised a better mass transportation system for people or freight, and that’s probably not going to change any time soon. This is where railway’s great opportunity is; of course, at the moment, the world is having the great environmental debate, and we’re seeing things like the ‘Flygskam’ movement in Sweden, which is seeing people, particularly younger people, making a stand for the change to taking trains instead of planes. But there is also a huge opportunity for railways to be integrated more with future transport systems; for instance, with a driverless car that can drive you to a train station, you can then get on a driverless train and another driverless car is waiting for you at the end of that journey. Being part of an integrated system is important for rail’s future.

…rail has a huge advantage over all other modes of transport in that nobody has yet devised a better mass transportation system for people or freight, and that’s probably not going to change any time soon

I like giving the analogy of the 1960s. At that time, people were really having to think forwardly because traditional railways were under threat – people were talking about air travel taking over completely. I would argue that those arguments are now over, and rail’s future is absolutely assured. I think that railways have a great opportunity – the sector just has to seize it and also make sure that the political arguments win as well.

Has there been a standout project or a key moment over the years that you consider to have pushed rail’s digital transformation and that we’re seeing the benefits of today?

I don’t think you can pick just one key moment. In the Victorian period, rail was the internet of its day; it completely transformed communication. And the great transformation in the use of data we see today hasn’t just come about recently, either. In the 1960s, British Railways introduced the Total Operations Processing System (TOPS), a computerised system which gave, for the first-time, full control of managing locomotives and rolling stock. And so the use of data, when it’s used properly, has benefited the railways hugely for some time. What we see now is a great expansion of that, with opportunities to improve railways beyond measure. So I think of things such as the on-board monitoring systems on modern-day trains that tell us exactly what’s happening with the train and identifying any faults immediately; whether it’s the doors, the engines, or fuel efficiency, but also any problems with the track and infrastructure too. To me, that’s all incredible.

However, something that kind of saddens me in a way is that there’s some fantastic things happening that we talk about a lot within industry forums and between each other as a sector, but I think we lack communication with the wider public to let them know how our railways are being transformed. We know that the media, even going back to the newspapers in Victorian times, have always had a habit to publicise when our rail networks are down or when season tickets and fares rise. I think there are exciting times ahead for rail, and that’s something to really sing about. 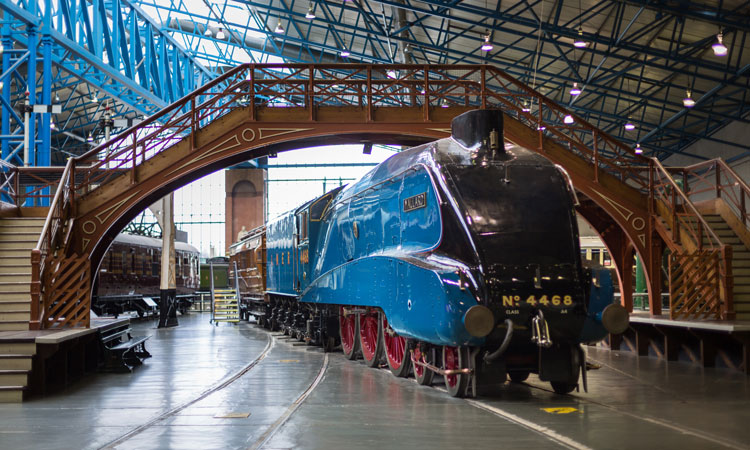 The Mallard steam locomotive on display at the National Railway Museum

What do you think about the industry embracing augmented reality, virtual reality, 3D printing, and other emerging trends and technologies?

This is an exciting time for railways for sure, and 3D printing technology, which has really come on tremendously, is being used by heritage railway lines and people restoring steam locomotives by replicating parts. The use of virtual reality and augmented reality to develop infrastructure and testing it without having to build massive prototypes should be a far easier and quicker way to speed up processes.

One of the things that I’ve learned and understood from attending Digital Rail Revolution 2019 is the discussion around a rail ‘revolution’, because often the industry has talked about an ‘evolution’. Discussions around true revolutionary steps and advancing with technology can start to become more of a reality for rail, rather than just thoughts and hopes.

What is the National Railway Museum doing to make sure that it is helping not only embrace history and current changes, but also going forward?

The National Railway Museum has always been well-known for its historic collections and telling rail’s story. But the one thing we’ve not been good at is telling the story of the now and of the future of railways, and we really want to inspire the more than 800,000 visitors we get through our doors every year. With our redevelopment plans, we’re aiming to get over one million people to visit the museum. That’s a lot of families, and one of our big remits is to encourage children and younger people to get interested in engineering as a career, and considering the railways as an industry to join.

As part of our redevelopment, we are creating an interactive gallery space called Wonderlab, which will house bespoke engineering and interactive features, which we hope will get children really interested in engineering

As part of our redevelopment, we are creating an interactive gallery space called Wonderlab, which will house bespoke engineering and interactive features, which we hope will get children really interested in engineering, but learning in a fun way. We want them to take that inspiration away and become engineers because we know there is a shortage in skilled engineers. So, we see our role going forward very much as working closely with the rail industry. We’re developing those links very strongly and we want to be a platform for the rail industry to showcase what the railways are actually doing. If we can play our part in helping this great industry continue way into the future for another 200 years, then we’ll be doing well.

What key takeaways have you learned from attending Digital Rail Revolution?

Attending Digital Rail Revolution has very much been an opportunity to learn and find out some of the great things that are happening. One of those things has been discussions around partnerships, not within countries, but across borders. There seems to be far more knowledge-sharing going on and, surely, that can only help the whole rail industry move forward. And that’s quite inspiring, as we want to improve our own knowledge so that we can keep telling rail’s story.

Some things don’t change – in the 19th century, people were envisaging the future – and we think about the future today too. I know that there is an ESA initiative called Space4Rail, which has been established to support the railway community by raising awareness of the added value that space-based assets can bring to railway applications. This is our future, but even people in the 19th century were thinking about space and rail – our museum houses illustrations of railway tracks going from the earth to the moon! Where will our ideas end? 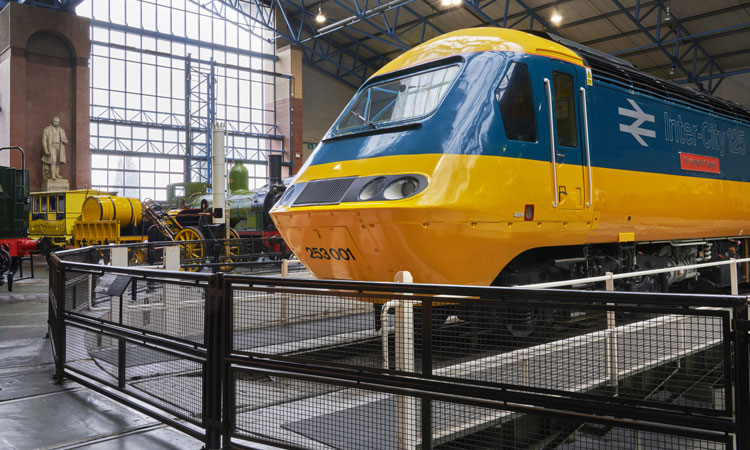 Britain’s most influential modern locomotive, the Class 43 no. 43002 Sir Kenneth Grange, on display at the National Railway Museum

The Future of Rail Freight: ‘There are new opportunities for the industry to innovate and grow’