Torkel Patterson, Vice-Chairman of the International High-speed Rail Association (IHRA), writes about how high-speed rail networks significantly contribute to sustainable development and how they support the economic growth of the regions they serve. 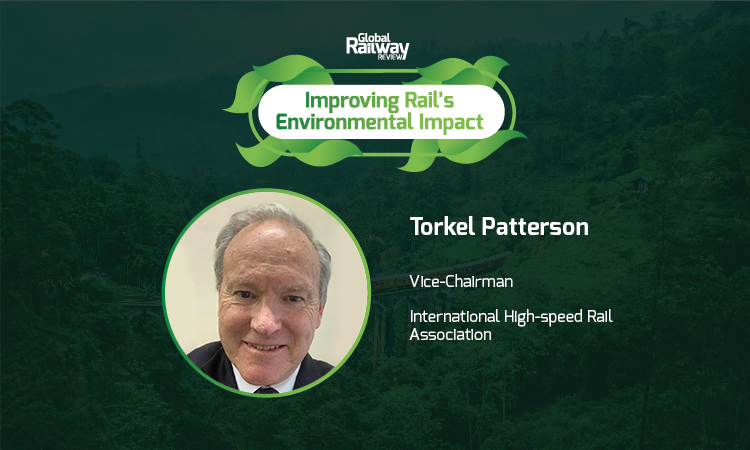 Most of us intuitively know that high-speed rail systems support sustainable development. The ability to move lots of people faster between cities, complete electrification and the continual commitment to energy reduction; the introduction of higher technology, the shift to predictive maintenance, economic growth and high quality employment; and the inherent safety and reliability of high-speed rail systems all contribute to achieving sustainable development goals (SDG). This article is an attempt to provide some examples that will help us, as an industry, better articulate our contributions toward sustainable development.

While we often think of rolling stock when we think of high-speed rail, it is really the total system that contributes to sustainable development.

While we often think of rolling stock when we think of high-speed rail, it is really the total system that contributes to sustainable development. By taking a wholistic system approach – including the track, signalling system, staffing, education, and their associated pipelines – we can have the greatest effect on sustainability. Take an area we are all familiar with, maintenance. While Japan and Taiwan have, to date, taken a preventive maintenance approach (replace before it is worn) and others, due to budget constraints, have had to pursue corrective maintenance (fix what breaks), the future is moving towards predictive maintenance. With sufficient data collection, maintenance efforts can be targeted, at a lower cost, and efficiency, safety and reliability are increased.

It is interesting to take look at SDGs to understand how high-speed rail systems contribute. While each may apply different criteria, here is one approach for ‘binning’ high-speed rail’s contributions: 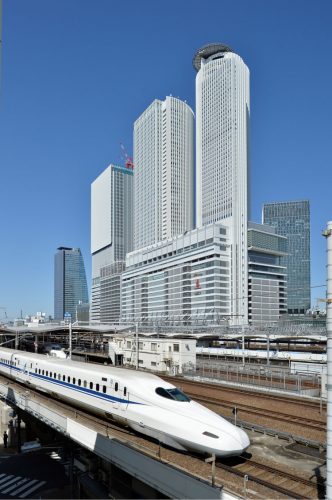 The infrastructure impact of high-speed rail systems in Japan has been significant: Nagoya Station.

This is an under-considered effect of the high-speed rail industry. As systems become more advanced (higher safety and energy efficiency, greater frequency and transport capacity) and faster (think 350km/h trains, SCMaglev and Hyperloop), the attractiveness of high-speed rail as a career appeals to youths. With these advanced systems, the technology level rises above the mundane to the exotic, and precision of operation becomes a pre-requisite for safety and reliability.

In some countries, such as Malaysia, there are not projected to be enough men to fill all of the opportunities that the future will bring. To promote STEM training among young school age females, Women In Rail Malaysia was created, using the future appeal of higher speed systems to identify and promote role models and to attract young women into rail-related careers.

In the UK, the National Skills Academy for Rail (NSAR) brings energy and enthusiasm to the development of skills for the railroad industry. NSAR goes beyond training to the accumulation of big data and applies it to its Skills Intelligence Model (SIM) to help organisations across the rail industry with investment plans, current and future workforces and skills gap analysis. NSAR’s current work is focused on bringing more diversity to the rail workplace.

I am sure that everyone in the industry believes that they have decent work. As India begins to construct a high-speed rail line between Mumbai and Ahmedabad, a perusal of the National High Speed Rail Corporation (NHRCL) – the responsible agency – website shows the significant scope of the project and the desire to use the project to begin an industry (Make in India) and up-skill a generation of railroad men and women. India plans to take what it learns from this project and, in the future, connect many of its viable city pairs with high-speed rail.

The construction of the Delhi Metro faced much criticism for its cost and the belief that India did not need subways. Now, it is the role model in every large Indian city and metro region for the jobs, decongestion and economic growth that it brings.

The Tokaido Shinkansen was first built in 1964, connecting Osaka and Tokyo. At the time of construction, it was considered exceptionally expensive and faced large cost over-runs. Over the years, the travel time on the same alignment has been gradually reduced from over four hours to 2.5 hours and significantly increased its ridership from 11 million (1964) to 174 million (2019). The Tokaido region accounts for 60 per cent of Japan’s GDP and is the home of ‘Japan Inc.’. The contribution of the Tokaido Shinkansen to the economic growth of Tokyo, Yokohama, Nagoya, Kyoto and Osaka is undisputed. 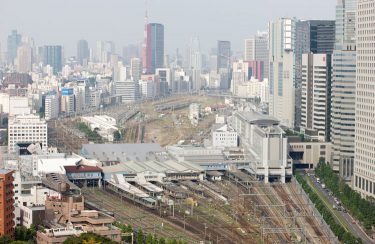 The infrastructure impact of high-speed rail systems in Japan has been significant: Tokyo’s Shinagawa Station

Currently, the railroad industry is undergoing a revolution in innovation. While web-based applications have been around for some time, there seems to have been an explosion in the use of IT, defined broadly, that is transforming the industry. Particularly in the utilisation of artificial intelligence (AI), big data, sensoring for maintenance and mobile solutions for customer interface, ticketing, journey planning and shopping. There has been more innovation in the industry over the past 10 years than in the previous 30 years, and the trend will only continue upward.

Central Japan Railway is currently building the largest privately-funded infrastructure project in the history of the world, using the world’s most advanced proven ground propulsion system. The Chuo-Shinkansen will connect Tokyo to Nagoya in 40 minutes by Super Conducting Maglev (SC MAGLEV), which will carry more than a 1,000 people per train, with a beginning frequency of four trains per hour. The Chuo-Shinkansen Line will be 85 per cent tunnelled in both high mountain and deep urban tunnels. There will be large depots constructed, high mountain bridges and six new stations, including under the existing Shinagawa and Nagoya stations. These stations will be built without interruption of the current Tokaido Shinkansen and commuter line services. Taken as a whole, the civil works construction is unlike any ever undertaken. 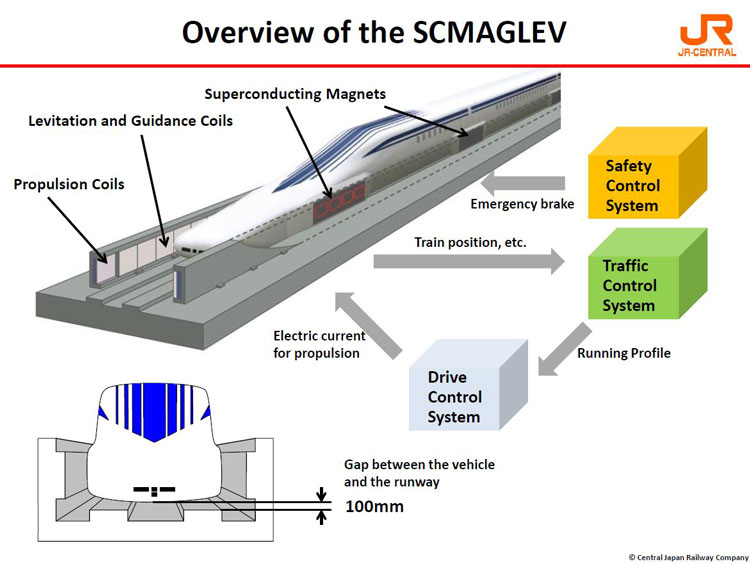 The SCMAGLEV system itself utilises driverless trains at 500km/h, controlled by control centre staff and their computer systems. By inherent design, the system is failsafe, with zero risk of derailment or collision. More than 300,000 people have ridden the SCMAGLEV and it has travelled more than 3.2 million kilometers on the 1/7 of the Chuo Line that is finished. This proven system is currently undergoing an Environmental Impact Study (EIS) and preliminary safety review by the U.S. state and federal government for the U.S. Northeast corridor. The system uses inductive cable in the guideways to provide power to the floating vehicle for lighting.

Trains use electricity. Hence, depending on the energy source, trains have significantly less energy consumption per seat than fossil fuel propelled cars, buses and planes. Since air resistance is proportional to the square of the speed; the faster a train goes, the more energy it consumes. Still, on a per-seat basis, high-speed rail outperforms all other modes of rapid transportation in energy consumption by two to 10 times. Almost all environmental groups support high-speed rail as an alternative to building more highway lanes or airport runways.

The contributions of high-speed rail and modern railroads to the accomplishment of the United Nations Sustainable Development Goals are not trivial and contribute significantly to the economic growth to the regions they serve.

As well as being the Vice-Chairman of the International High-speed Rail Association (IHRA), Torkel Patterson is also an ‘outside’ Director of Central Japan Railway and an advisor to The Northeast Maglev (TNEM). Torkel was previously President of Raytheon International Inc. and served in a variety of posts in the U.S. government in three administrations, including Special Assistant to the President for Asia. Torkel graduated from the United States Naval Academy and was an Olmsted Scholar at the University of Tsukuba in Ibaraki, Japan. He is a Director of the Olmsted Foundation and Pacific Forum International.