Twelve modern diesel locomotives – purchased thanks to joint financing from the European Bank for Reconstruction and Development, the European Investment Bank and the European Union – have arrived in Moldova’s capital. 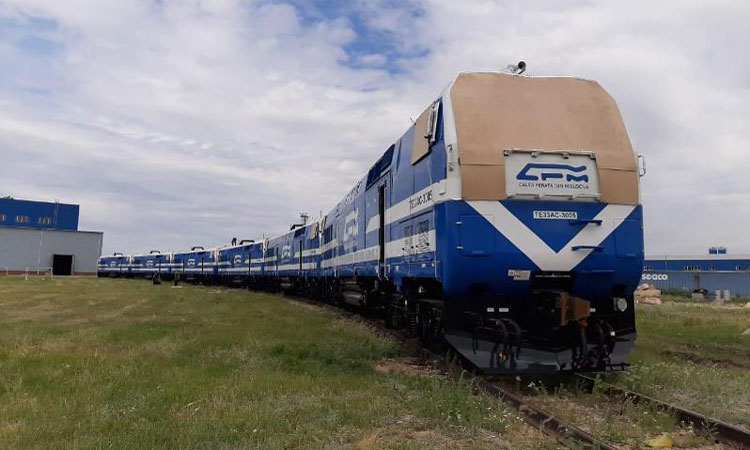 The acquisition of the 12 modern diesel locomotives is part of a large project financed by the European Bank for Reconstruction and Development (EBRD), the European Investment Bank (EIB) and the European Union (EU) that also includes the rehabilitation of railway infrastructure and comprehensive reform of Moldova’s state-owned railway company Calea Ferată din Moldova (CFM)to improve safety, efficiency and corporate governance.

The new rolling stock was manufactured in Nur-Sultan, Kazakhstan, by GE Transportation, now a division of the U.S. company Wabtec, a leading supplier of freight car and locomotive products. GE Transportation was contracted following a tender held by CFM in 2018 in line with EBRD procurement policies and rules.

The engines will consume less energy than the current stock and ensure safer, more efficient transport of goods and passengers within Moldova and to its trading partners abroad.

Igor Dodon, the President of Moldova, expressed gratitude to the representatives of the EBRD and the EIB in Moldova, and to the head of the EU Delegation to Moldova, for the constant support they provide through various projects that finance strategic sectors. The head of state noted that the efficient management of Moldovan railways is a priority to re-energise the country’s economy.

Adrian Onceanu, CFM Director General, said: “Thanks to the locomotives’ more powerful diesel engines, fewer operations will be needed. This will improve transport efficiency and reduce operating costs. The improved technical characteristics of the new diesel rolling stock will increase the interval between the scheduled maintenance to 92 days from 48 hours, significantly reducing the maintenance costs. They will also help reduce the consumption of diesel fuel by 15-20 per cent and oil by 35-40 per cent, resulting in significant savings.”

Ambassador Peter Michalko, Head of the EU Delegation to Moldova, added: “This event today marks an important step towards making Moldova greener and more sustainable. It  also showcases the successful cooperation between the EU and Moldova in this sector, which proves that together we can overcome challenging times and achieve our objectives for a sustainable economy, environmental resilience and social prosperity, for the benefit of the people of Moldova. The EU’s support for the people of Moldova is provided for both infrastructure and reforms, because both need to be done to provide quality of life.”

Angela Sax, EBRD Head of Moldova, said in a video statement: “The arrival of the new locomotives, financed by the EBRD, EIB and EU, is a real milestone: they mean a more modern, greener and dynamic Moldova. The new rolling stock will facilitate Moldova’s trade, keep the economy’s wheels turning and improve lives.”

EIB Vice-President Lilyana Pavlova commented: “It is the task of the EU bank to work towards an upgrade of the transport infrastructure in Moldova. The new locomotives will facilitate a more environmentally friendly transport mode and improve the interconnectivity inside the country as well as with neighbouring countries. This will contribute to better conditions for the transport of passengers and goods.”

The tender for the upgrade of railway infrastructure is currently underway and the company is implementing an action plan to improve corporate governance. In addition, Moldova’s parliament is due to adopt a new Railway Code, legislation based on EU directives that aims to bring the country’s railway sector in line with the Association Agreement with the EU.

The total project cost is €110 million, of which €5 million is an investment grant from the EU’s Neighbourhood Investment Facility (NIF) and the remainder from loans by the EBRD and EIB.