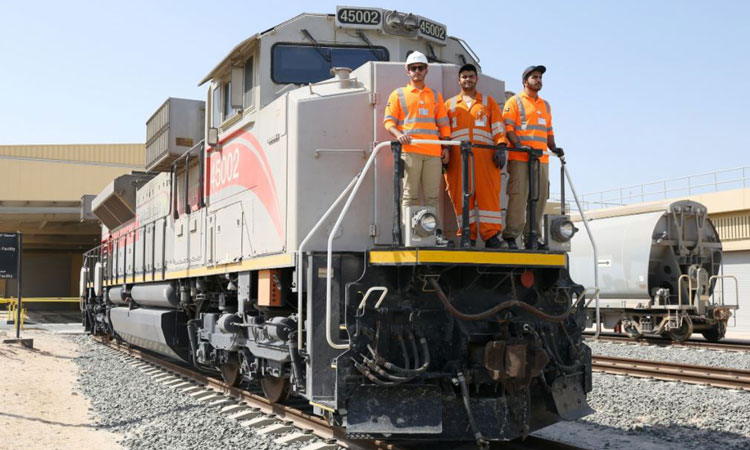 Etihad Rail, the developer and operator of the national railway network in the United Arab Emirates (UAE), has announced the graduation of the first batch of Emirati nationals on the Railways Diploma Programme from the Abu Dhabi Vocational Education and Training Institute (ADVETI) and their subsequent employment by Etihad Rail DB, the company responsible for the operation and maintenance of Stage One of the national railway network.

The 10 students who have now joined the workforce are the first batch to finish the Railways Diploma Programme in the UAE, which was launched in 2017 under a partnership between Etihad Rail and ADVETI. This first batch will take over a number of technical positions, including the roles of train captain, traffic controller, locomotive and railway maintenance technician, and railway systems technician.

The programme, which is the first of its kind in the country to provide the first Diploma in Railways in the UAE, aims to prepare qualified national cadres capable of leading the future of the national train and railway sector. It includes two years of theoretical training and one year of practical training, enabling the students to eventually join Etihad Rail DB in full-time careers.

Saeed Salem Al Suwaidi, CEO of Etihad Rail DB, said: “Our efforts to empower Emirati nationals are in line with the strategy of our parent company, Etihad Rail, which actively supports the Emiratisation policy in the country and encourages Emirati youths to join this vital field. We are proud to welcome the first batch of graduates who will represent the future of the railway sector in the country. During their years of theoretical and practical training, the graduates have demonstrated their dedication and ability to take on the challenge of acquiring knowledge in the railway sector, which is a completely new sector in the country, and have demonstrated great interest and passion in the field.”

In line with its efforts to support the Emiratisation agenda in the country, Etihad Rail recently announced the launch of an additional programme to train and employ more Emirati nationals with experience and high skill sets in various disciplines and engineering fields, and the first batch has been appointed to positions across Stage Two of the national rail network, which is currently under construction. In addition to these previously announced opportunities, the company has now opened up additional training and employment opportunities for Emiratis.