Skills shortage set to escalate in UK rail industry by 2025

Research shows that up to 120,000 additional people will be required over the next five to 10 years, with demand for skills peaking around 2025. 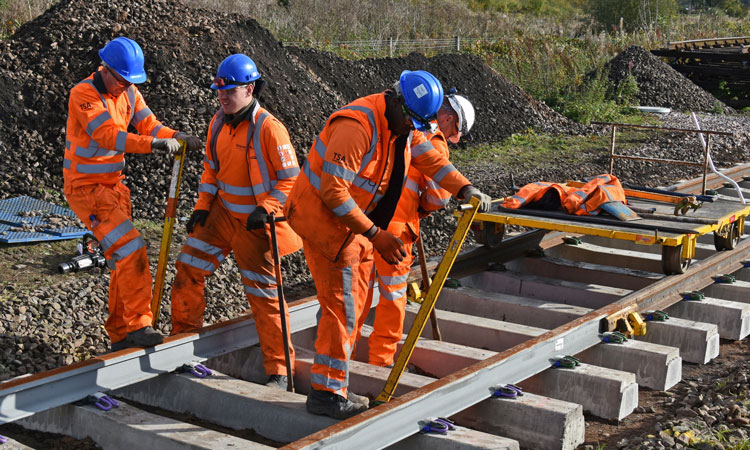 New research by City & Guilds and the National Skills Academy for Rail (NSAR) paints a stark picture for the future of the rail workforce, with skills shortages set to escalate significantly in the sector over the next five years.

With major rail infrastructure projects due to be announced at the end of November 2020 as part of the long anticipated National Infrastructure Strategy, the Back on Track report – which includes findings from research undertaken by YouGov and data from NSAR on 242,000 workers in the rail industry – reveals that there is potential for these to create a new lease of life for the UK economy through new jobs and economic growth.

However, serious systemic issues in the industry’s talent and skills pipeline have created a shortage of trained and talented employees, just when the industry needs them most. While the industry has made progress in addressing these issues – which include a short-term approach to skills development, an ageing workforce and a reliance on overseas and ‘third-tier’ workers – greater industry collaboration is needed to fix them in time to meet this additional demand.

The research finds that the rail sector is set to lose huge numbers of skilled workers over the next few years. With 28 per cent of workers in the industry aged over 50, this means that some 15,000 workers could be due to retire by 2025. Meanwhile, Brexit is set to exacerbate this issue, potentially reducing access to overseas workers. From 2016 to 2018, the proportion of European Union (EU) workers in the rail sector dropped from 17 per cent to 15 per cent – and this declining trend is expected to continue.

As a result of this talent and skills shortfall coinciding with new rail projects that will heighten the demand for skills, between 7,000 and 12,000 additional people will be required every year by the industry over the next five to 10 years – up to 120,000 people in total. With modelling showing peak demand around 2025, people must be recruited now to equip them with the relevant skills and experience to meet future demand.

But, as highlighted in the new report, a lack of upskilling opportunities and perceived reputational problems mean that the industry continues to struggle to attract and train candidates, with just a third (32 per cent) of respondents saying that they would consider a career in the rail sector. This is particularly acute amongst women, young adults and people from BAME backgrounds:

Managing Director of Technical Training at the City & Guilds Group, Martin Hottass, said: “The UK rail industry is on the cusp of leading a once-in-a-generation infrastructure revolution, with the potential to create thousands of high quality jobs across the country at a time when they are needed most. However, the dual blow of Brexit and a retirement cliff edge, in addition to systemic issues around growing and retaining skills, means that unless government, employers and industries work together to urgently addresses these issues, they risk scuppering this golden opportunity. It’s clear that greater collaboration will be key to increasing awareness of opportunities in the sector, and ensuring that rail projects are committed to creating lifelong learning opportunities.”

Neil Robertson, CEO at the National Skills Academy for Rail, stated: “The rail industry’s lack of diversity and perception by younger people are well known, but less well understood – and while many people in the industry are already working to recruit and upskill a more diverse workforce, it’s by shedding a light on these issues that we can understand the solutions that will truly make an impact. Now, as we look to invest in new talent to fill future skills gaps in the rail industry, it’s also clear that we can use this opportunity improve social mobility across the UK. By hiring people from different backgrounds and regions and providing them with quality skills and career progression, we can ensure that these infrastructure projects not only create jobs, but also promote positive socioeconomic change.”

The report found that this disinterest in careers in rail could be largely fuelled by misperception and a lack of awareness and understanding about the wide range of career opportunities and roles in the sector – pointing to a basic need to educate a wider pool of people about the potential jobs available to them. Of those who said that they wouldn’t consider working in the rail industry, 42 per cent said that they don’t know enough or anything about careers in the sector, whilst 35 per cent said they don’t have the skills needed to get in the sector.

City & Guilds and NSAR are calling on the rail sector and government to collaborate and take a joined-up approach to urgently gear up the industry’s skills and talent pipelines, before it’s too late.

The seven key recommendations outlined in the report are:

Brexit, The Workforce, Women in Rail

Brexit, The Workforce, Women in Rail