Thirty years ago, six ICE 1 trains converged in Kassel-Wilhelmshöhe from different directions and officially inaugurated the era of high-speed rail travel in Germany. 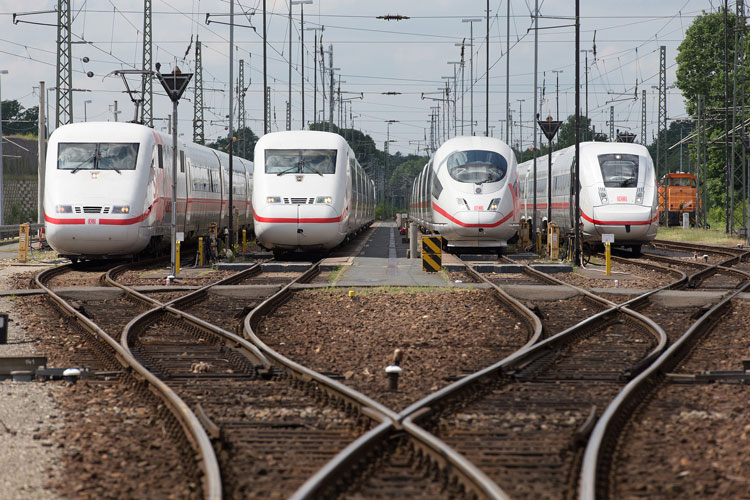 On 29 May 1991, six ICE 1 trains converged in Kassel-Wilhelmshöhe from different directions and officially inaugurated the era of high-speed rail travel in Germany.

The new Hanover-Würzburg and Mannheim-Stuttgart high-speed lines slashed travel times on north-south connections by up to two hours. Over the following years, the ICE ‘family’ was further developed and expanded: The ICE 2 debuted in 1996, followed by the ICE 3 four years later.

While the ICE 1 and ICE 2 were developed and built with the participation of Siemens, the ICE 3 was a complete Siemens in-house development. It was also the first high-speed train used for cross-border service to the Netherlands, France and Belgium, being designed for four different operating voltages and the various train protection systems. The ICE 3 was Germany’s first high-speed train to reach a top speed of over 300km/h. All drive components were distributed completely beneath the floor, allowing the seating capacity to be significantly increased.

In 2016, the ICE 4 from Siemens Mobility ushered in a new era in ICE service for Deutsche Bahn (DB). With its flexible configurations and generous interior space (918 seats in a 13-car unit), the ICE 4 has become the new backbone of Germany’s long-distance system. The trains have a top speed of 250km/h (up to 265km/h in the future). The ICE 4 order was the largest in the history of Siemens Mobility. A new ICE 4 is currently being added to DB’s long-distance fleet every three weeks, and by 2024, Siemens Mobility will have delivered a total of 137 ICE 4 trains. In July 2020, DB awarded Siemens Mobility an additional order for 30 ICE Neo (Velaro MS) trains. Technically, the new train is based on the proven Velaro platform of the ICE 3.

The trains are notable for their longevity, with a service life of more than 30 years. The ICE ‘Gütersloh’ e.g. is an ICE 1 (Class 401), has the multiple unit number 158 and was put into service in June 1991. Since then, it has reliably reeled off around 15 million kilometers, which is roughly 39 times the average distance from the earth to the moon (384,000km).