HS2 Ltd has revealed the colossal logistics operation that is taking place at its logistics hub near Willesden Junction, which will be used to process earth and deliver construction materials. 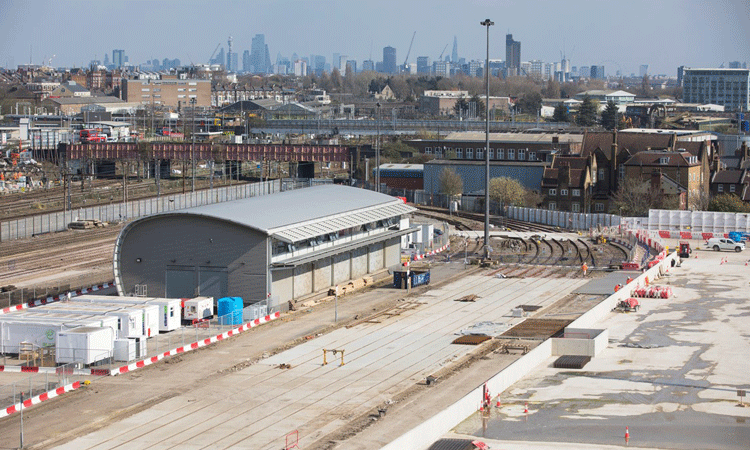 The 30-acre site will be the beating heart of the logistics operation for HS2 in London and will be where earth, from the 26 miles of tunnel, will be processed, as well as critical construction materials, such as pre-cast tunnel segment rings, will be delivered. The hub has been constructed and will be operated by HS2’s Main Works Civils Contractor, Skanska Costain STRABAG joint venture (SCS JV).

The construction of HS2’s London tunnels will require 5.6 million tonnes of earth to be excavated. After being processed at the site near Willesden Junction, it will be taken by train to three locations across the UK including, Barrington in Cambridgeshire, Cliffe in Kent, and Rugby in Warwickshire. It is here where it will be put to beneficial reuse, filling voids which will then be used as a basis for redevelopment, such as house building.

The site will also receive over 100,000 pre-cast tunnel segment rings, which will be used to form the walls of the London tunnels, delivered by rail from UK manufacturing sites. HS2’s contractor SCS JV has already confirmed that the first contract for pre-cast tunnel segment rings has been awarded to Pacadar UK and will be delivered to the site from their factory in the Isle of Grain in Kent.

At peak operation, eight trains per day will depart and arrive at the logistics hub, maximising the use of rail freight in the construction of HS2 in London and resulting in one million lorry movements not going on UK roads.

Speaking at the opening of HS2’s logistics hub, Mark Thurston, HS2’s Chief Executive Officer said: “In building Britain’s new high-speed railway, HS2 is committed to protecting the environment and minimising our carbon footprint during design, construction and operation. As a result, we are moving as much material as we can by rail as part of our Materials by Rail programme.

“The logistics hub at Willesden will be the beating heart of our London logistics operation and is a critical part of how we are building HS2.”

The operation is being coordinated from a refurbished building on the site. Sheffield based SME, 3Squared, has developed a bespoke rail logistics software solution to manage and track the railway materials movements in and out.

James Richardson, Skanska Costain STRABAG joint venture Managing Director, speaking about the scale of the operation commented: “The logistics hub is central to the London Tunnels programme. Collaborating with other partners delivering HS2, we will remove 5.6 million tonnes of spoil by rail and bringing in our tunnel segments, taking one million lorry journeys off the road. We are committed to reducing our environmental impact and by using rail we will reduce our carbon emissions for logistics by 40 per cent.”

“It is fantastic to see the hard work and effort coming to fruition in this large-scale logistics operation, which will radically improve efficiencies and operations across the wider UK transport network,” further added Tim Jones, Managing Director of 3Squared. “Joining the HS2 project has marked an exciting chapter in 3Squared’s journey, and we look forward to continuing to work with SCS JV and providing our technological skill and expertise, as HS2 progresses.”

The London Logistics Hub sits on the old Freightliner Terminal site that first opened in 1967. It went on to become one of nine regional freight terminals developed specifically to handle Channel Tunnel intermodal traffic but eventually went into disuse in 2005. The site’s connections to the conventional railway make it an ideal location to coordinate HS2’s London logistics operation.

The logistics trains are currently operated by GB Railfreight (GBRf) and the entire operation is the result of meticulous planning between HS2, Network Rail, SCS JV and HS2’s supply chain. The first train departed the site at the end of June 2021, taking 1,470 tonnes of spoil to Barrington in Cambridgeshire.

John Smith, Managing Director of GBRf said: “Today’s opening marks a huge commitment to reducing the impact of carbon emissions caused by construction and we’re proud to jointly recognise this with HS2 by unveiling the fittingly rebranded Class 66, ‘The Green Progressor’.

“HS2 Willesden’s logistics hub promises to support the growth of rail freight in the UK by removing one million HGVs from our capital’s roads alone. By increasing the amount of material transported by rail freight for the construction of HS2 in London, GBRf will continue to play a leading role in the delivery of government’s net-zero targets and the decarbonisation of transport.”

“We’ve been working with HS2 and its supply chain on their plans to move excavated materials by rail from the Willesden logistics hub,” added Nick Coles, Programme Manager at Network Rail. “Timetable, operations and infrastructure preparations have long been in the making and it is a credit to all parties involved that freight services have started life so smoothly.

“Today, the UK railway network is supporting approximately 60 rail freight services a week for HS2, and we’ll continue to work closely with its industry partners to make as many carbon savings as possible.”