The National Robotarium has unveiled the design of a new train cleaning robot which can clean the hard-to-reach places on trains such as between and under seats. 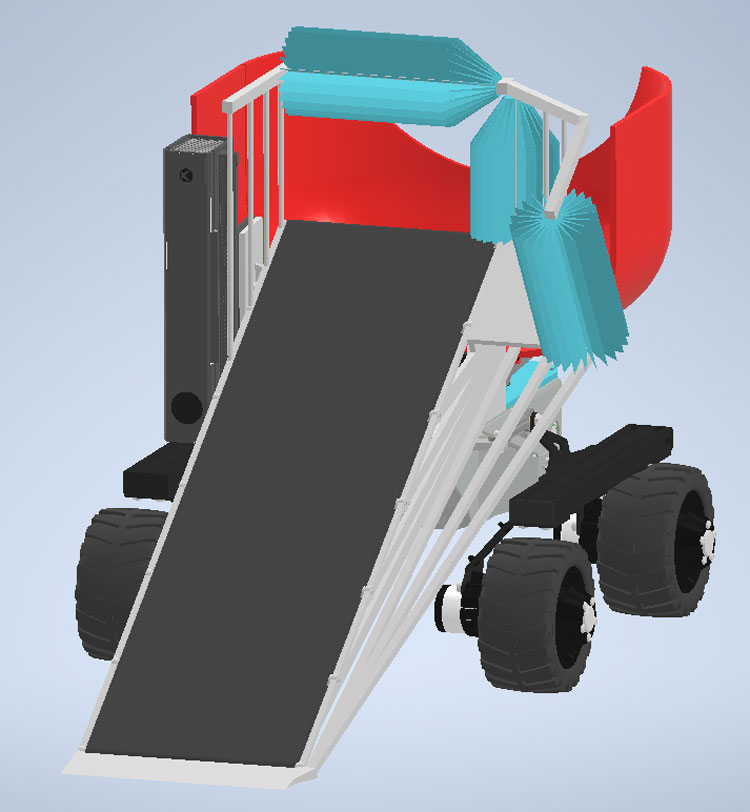 Funded by rail research body RSSB, the new robot has been designed to increase the cleanliness standards on trains in the UK and complement cleaning regimes already performed by humans.

The National Robotarium – a partnership between Heriot-Watt University and the University of Edinburgh – has spent the last two years working on the most appropriate design and operating system for the robot. The robotics and AI research facility is part of the Data-Driven Innovation initiative and is supported by £21 million from the UK Government and £1.4 million from the Scottish Government through the £1.3 billion Edinburgh and South East Scotland City Region Deal – a 15 year investment programme jointly funded by both governments and regional partners.

Cleaning train carriages is an essential element of routine maintenance and has been under increasing scrutiny since the COVID-19 pandemic began to maintain public confidence in rail travel.

Research into passenger attitudes has consistently shown that travellers want a higher standard of cleanliness on their railways. In a 2020 Transport Focus survey of over 50,000 UK rail passengers, a quarter said they were dissatisfied with the levels of cleanliness inside trains.

“Our research uses robotics and AI to help people to solve a wide range of challenges,” explained Dr Mustafa Suphi Erden from the National Robotarium who is leading the cleaning robot project. “With the daily pressure on rail services, it’s essential that trains are cleaned as fast and as efficiently as possible. However, at present, this process is done entirely by hand requiring a significant amount of time for the cleaning personnel to collect each waste item one-by-one from under and in-between the seats.

“Reaching underneath seats repeatedly over a long shift can lead to health problems. Also, cleaning staff regularly encounter hazardous and biological waste which poses a significant risk. We’ve worked closely with rail operators to design a robot that can complement existing cleaning regimes, aiding human cleaners to deliver an ongoing service and freeing them up to focus other hygiene tasks including disinfecting surfaces like tables, cleaning the seats and removing dirt, fluid and food waste. As well as being important for health, cleaning can also prevent train delays with discarded newspapers identified as a reason why train doors can fail to close.”

Over the last two years, the National Robotarium team has used more than 58,300 studio images of waste in a variety of conditions to help the cleaning robot to identify waste more accurately, along with several smaller datasets of actual waste photographed in situ on trains, taken from the perspective of a cleaning robot.

The studio images were designed to provide as much data as possible about the features of each waste item, so each unique item was photographed at many different angles. In addition, waste items that can deform, such as newspapers or coffee cups, were represented in different states.

In interviews with rail service providers, the team obtained further information regarding operating conditions to help guide the design of the robot. The narrow under-seat area, which collects the most waste items, is extremely limited especially on older trains and this makes waste collection challenging for both humans and robots. Some spaces were measured at just 28cm tall, with entry points as small as 31cm.

UK government Minister for Scotland, Iain Stewart, said: “The pandemic has shown the importance of regular, thorough cleaning on board public transport. I am excited that these new robots could help make cleaning both quick and affordable, and so improve the wellbeing of travellers and staff. The UK government is investing £21 million in the National Robotarium to support its cutting-edge research into innovative solutions like this.”

Employment Minister Richard Lochhead said: “The COVID-19 pandemic has shown how important good hygiene and cleanliness is in all our public spaces – and I’m sure that this new robot will improve working conditions for railway staff and the environment for passengers. The demand for skills will change as our businesses adapt and we build on our growing reputation for hi-tech industries, which is why ensuring Scotland has a skilled and productive workforce, both now and in future, is central to our economic ambitions as we adapt to technological change. I’m pleased the Scottish government is providing £1.4 million to support the National Robotarium as we move towards a sustainable and innovative economic recovery.”

Dr Erden continued: “Our chosen design had to be able to work in a very constrained environment as well as travel between coaches and over uneven surfaces. We also need a robot that could collect and store newspapers and cups, the most frequent and problematic waste items on trains, with grasping technology able to manage the geometry of coffee cups and newspapers in a confined space.

“We believe this cleaning robot has the most potential for widespread adoption. It will benefit existing employees by supporting their roles and freeing them up to do less physically demanding and hazardous cleaning tasks while passengers will have reassurance that their carriage has been cleaned to a high standard. We hope this will reassure travellers and result in increased customer numbers for rail operators.”

Luisa Moisio, Director of Research and Development at the RSSB, said: “We’re delighted to be supporting this important research that is contributing towards a step change in working conditions for railway staff, and which will also give passengers added reassurance about the cleanliness of carriages. Robotics is expected to be an important area of growth for the economy, and GB rail is taking the initiative, exploring how robots can be used to assist humans in dangerous, difficult, or dirty tasks.”

The research team will now focus on the production of a flexible navigation tool to guide the robot, and a waste detection algorithm.