Network Rail is trialling a tilt metre monitoring system to warn of earth movements, allowing them to better manage risks to passengers. 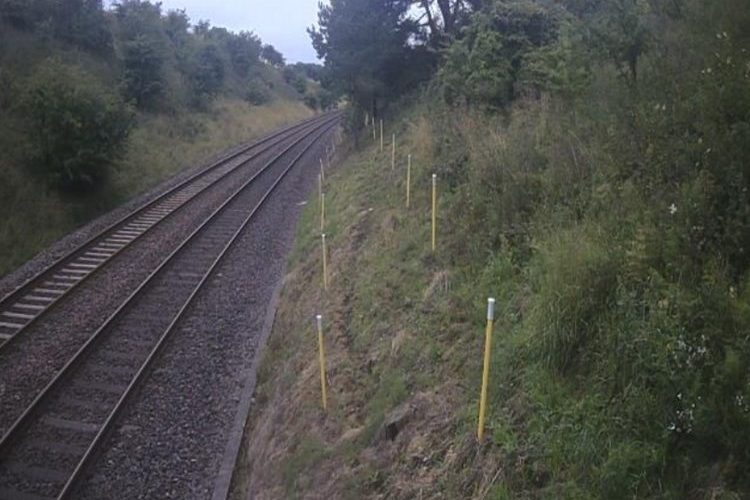 Network Rail is currently trialling a monitoring system which provides early warning of earth movements at sites across Scotland’s Railway. Surface mounted tilt meters have been located at 26 sites across the network, with a further seven sites across the country set to be installed in the coming months including on the main Edinburgh-Glasgow line, East Kilbride branch, between Aberdeen & Inverness and on the line to Kyle of Lochalsh.

It is hoped that they will reduce the risk from landslips and improve the overall safety of the railway by detecting movement in slopes above or below the line. The system can be used to quickly flag potential issues to engineers, enabling trains to be slowed down and stopped before they reach the problem area.

“In Scotland, we are increasing our use of new monitoring and surveillance technologies to mitigate risks,” Alan Ross, Director of Engineering and Asset Management at Network Rail, said. “This includes making more use of drone and helicopter surveys trialling new weather forecasting methods for the railway. The weather is increasingly changeable, and technology has provided us with tools to proactively monitor and model when and where extreme weather will occur and how it will impact on infrastructure.”

Providing notifications in around less than two minutes, the system has two banks of wireless tilt sensors, typically spaced 2.5m apart with a centrally mounted pole, logger and cameras to monitor data from the sensors. Tilt sensors will detect movement in slopes when there is more than a 5-degree tilt and send the alert via the mobile network to alert train controllers to the potential danger. The system is powered by solar panels with battery back-up available for resilience.

All slopes around the railway are subject to the impact of weather and given climate change, are experiencing more and more extreme weather, particularly heavy and prolonged rainfall.  Successful implementation of this system will help keep the railway operating safely during poor weather. It is expected that by April 2024, tilt monitoring will have been installed at 100 locations across Scotland’s Railway.