HS2 have released an updated design of the new London Euston terminus station; the new design offers a less complex, more efficient, 10-platform station that can now be built in a single stage. 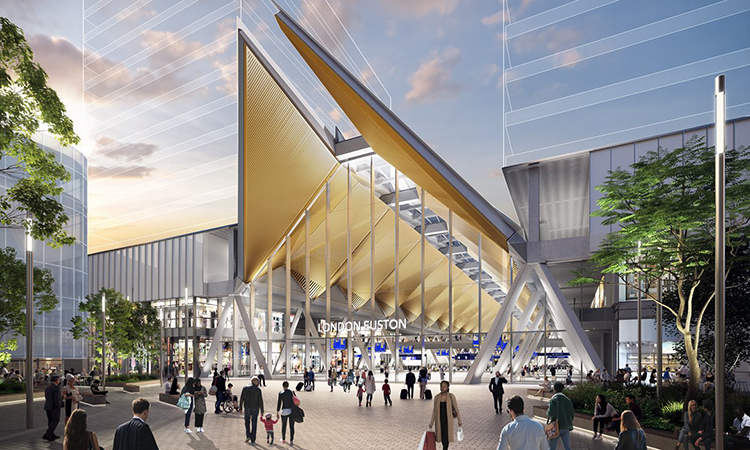 HS2 Ltd has a new updated design for Britain’s new high-speed railway terminus station at London Euston. Brand-new images show the concept design for the exterior and interior of the station. The designs, updated from 2015, are based on a less complex, more efficient, ten-platform station which can now be built in a single stage. They have been drawn up by a design consortium made up of Arup, WSP and Grimshaw Architects, working into HS2’s Station Construction Partner, Mace Dragados JV (MDJV).

“The arrival of HS2 at Euston provides a once in a lifetime opportunity to create an iconic destination in the area, that will help us grow not just the economy of London but that of the UK,” Andrew Stephenson, HS2 Minister, said. “This station will serve as a transport super hub acting as a gateway to the Midlands and the North, enabling us to deliver better railways across the nation sooner than under previous plans.”

Construction of the HS2 station will support 3,000 jobs at peak and will offer hundreds of contract opportunities through the supply chain. MDJV recently began a multi-year procurement of packages worth £500 million for work on the HS2 station and the London Underground at Euston and Euston Square which will provide improved connections for passengers.

“HS2’s London Euston station is one of the most complex parts of the HS2 route, situated in a densely populated residential area and adjacent to a busy operational railway,” Laurence Whitbourn, Euston Area Client Director at HS2, said. “With the arrival of HS2, Euston is fast becoming one of the largest transport-led regeneration projects of the 21st Century.”

The station will feature a bold geometric roof design to allow natural light to flood into the station concourse. The roof is an identifying feature of the station and emphasises it’s north-south alignment, and its role as a regional gateway. Elements of the innovative roof can be prefabricated off site, and installed using modular construction techniques, reducing costs, carbon emissions and local disruption.

The HS2 station will be set across three levels, with 10 450m-long subsurface platforms, which will at peak operation will be used by up to 17 high speed trains per hour serving destinations in the Midlands and the North. There will be 50,000 high-speed train seats over the three-hour morning peak.

The ground-level concourse will be 300m-long and will allow free movement for both passengers and visitors through the station and will open out onto new public spaces at the north and south. The station hall, 20 per cent larger than Trafalgar Square, will become the largest station concourse in the UK. Retail and station facilities will be available on the ground and first floor, underneath the dramatic top-lit station roof.