HS2 have updated designs at Streethay near Lichfield to cut carbon emissions, with 80 per cent less concrete now being used in the project. 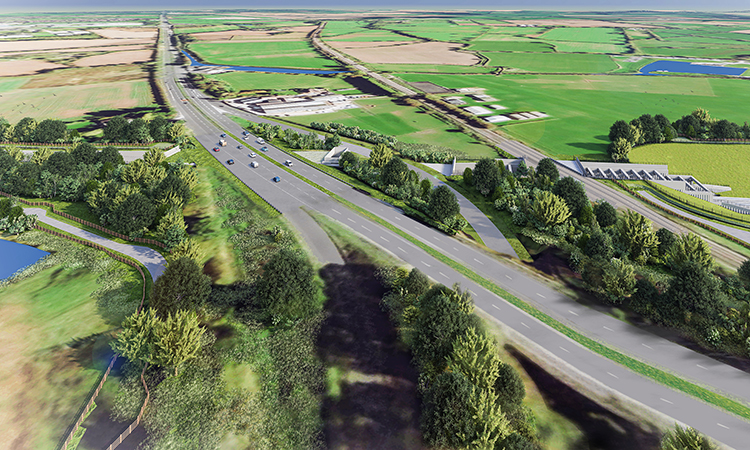 Credit: HS2 - A visualisation of HS2 Streethay cutting under the A38

HS2’s designers have reduced the length of wall structures for the railway at Streethay from 1.6 kilometres to 420 metres, meaning 80 per cent less concrete will be needed, supporting HS2’s ambition to cut carbon on the project. This will save around 70,000 cubic metres of concrete, the equivalent to 6,700 concrete mixer lorry loads. In total, around 420,000 tonnes of carbon has been saved in this area of the project.

The railway will pass through Streethay in a cutting, and the shortening of the retaining structures also means the community will experience less noise and disruption during construction because fewer large machines will be needed on site.

Most of the Streethay cutting will now have sloping earth banks, improving the visual appearance of the railway and increasing the opportunity for wildlife habitats and landscape planting to protect against noise from the railway. The updated design also results in a shorter diversion of Fulfen Wood watercourse.

Related news you may enjoy:

The early proposed design was for the railway to cross over the A38 Rykneld Street, A38 southbound slip road, and the South Staffordshire train line. As a result of community feedback received during the public consultation, the design was changed in 2017, with HS2 now passing beneath these roads and the railway in a cutting, which greatly reduces the visual impact of HS2 in this area.

“As we’ve been developing the detailed design for HS2, it’s vital that we try to minimise impacts and get the best solution for the communities near the new railway line,” Simon Hinsley, Senior Project Manager for HS2 Ltd, said. “We listened to the community back in 2017 and changed the design from viaduct to cutting, and we’re pleased that these further updates bring more benefits, both for the local community and the environment, better visuals, less carbon from concrete, shorter construction period and more environmental features.”

“This new design will see the HS2 line pass underneath the A38 and neighbouring railway line, bringing significant environmental and community benefits,” Andy deBell, Head of Stakeholder Engagement for BBV, said. “We’ll continue to make sure the local community is kept updated, providing more detail on the works before they begin and during construction. There’ll also be opportunities in the near future for local residents and businesses to attend community drop-in sessions, where they can find out more about what’s going on in their area.”