Deutsche Bahn and the Federal government will work together to develop a high-performance network that increases the reliability and growth of rail. 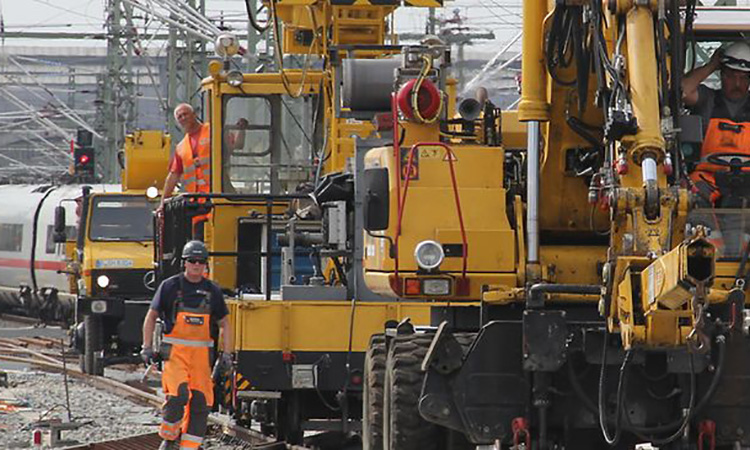 The high-performance network will include the busiest rail connections in Germany, these cover around 10 per cent of the entire network. Around 25 per cent of all trains already use this network. In addition, it already has an average occupancy rate of around 125 per cent without any construction work. Due to the forecast traffic development, the length of this heavily used network will increase from currently around 3,500 kilometres to an estimated 9,000 kilometres by the end of the decade.

“The accumulation of more and more traffic on an infrastructure that is already scarce and further restricted by construction work leads to traffic jams and delays with massive effects on all customers in passenger and freight transport,” Richard Lutz, CEO for DB, said. “A sustainable solution lies in the infrastructure because 80 per cent of the quality of the railway system is decided on the rail network. The federal government and DB are therefore developing the heavily used network into a high-performance network. It becomes the backbone for passenger and rail freight transport, from a problem to an anchor of quality and stability for the entire infrastructure.”

The intensity of use on the German rail network has increased by more than 60 per cent since the 1994 rail reform. The increasing demand is hitting route networks and stations that have not grown with it. At the same time, the condition of the infrastructure has deteriorated because many tracks, switches, bridges, and signal boxes are old and therefore prone to failure

With a general overhaul of the most important rail corridors, the heavily used network is to develop into a stability anchor for the entire rail network by 2030. Disruptions will be greatly reduced on these routes and the infrastructure will be significantly more robust. In addition, new capacities after the work will create additional space for more climate-friendly rail traffic. Customers of freight and passenger transport will notice a clear before and after difference. Industry benefits from first class freight corridors. This also increases the attractiveness of the train stations for passengers. Railway companies and transport authorities can make a better offer after the general renovation. 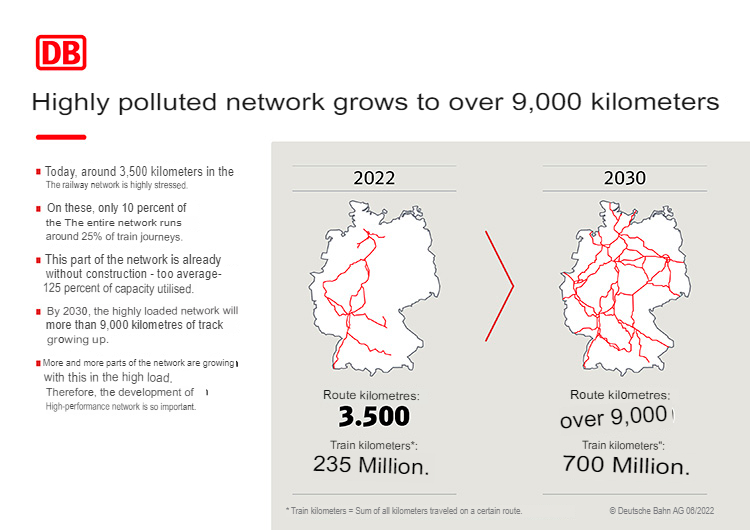 Credit: DB – Roughly translated from German (see below for the original) 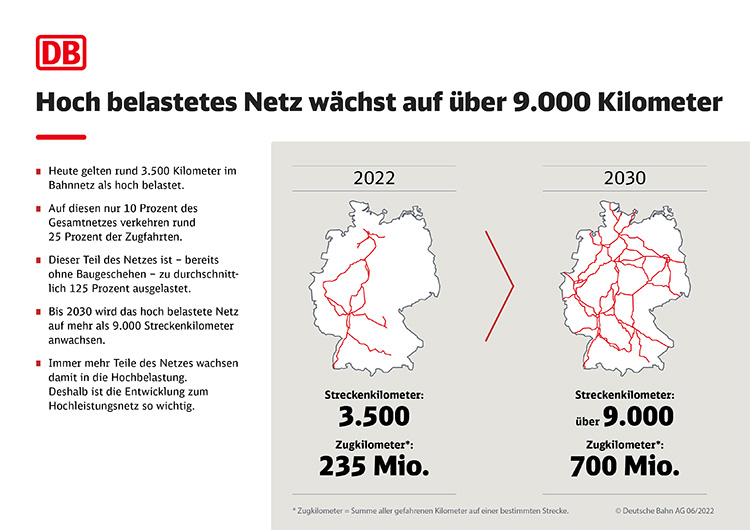 According to DB plans, all outdated and fault-prone systems will be completely replaced and improved during the general renovation of the high-performance network. This comprehensively eliminates the investment backlog here. A first-class equipment standard prevails in the high-performance network: area-wide track-changing operation, fewer level crossings, sufficient overtaking and transfer points make rail operations more robust in the face of unforeseen disruptions. The high-performance network has more reserves and equipment components are used that are significantly more powerful and reliable. Prevention and prediction ensure predictive maintenance and are supplemented by 24/7 high-performance fault clearance. Diagnostic systems provide continuous information about the status of the availability-relevant systems. This makes possible, to service the systems as part of planned maintenance work without disrupting operations before errors occur. The completely renovated routes are being prepared for the digital rail system in Germany.

The general renovation of the first rail corridor is scheduled to start in 2024. The Federal Ministry for Digital Affairs and Transport and Deutsche Bahn want to invite the industry to develop the high-performance network together.