Dynamic track testing has begun on a hydrogen powered demonstrator train developed by the FCH2RAIL project, which is a consortium of companies including CAF. 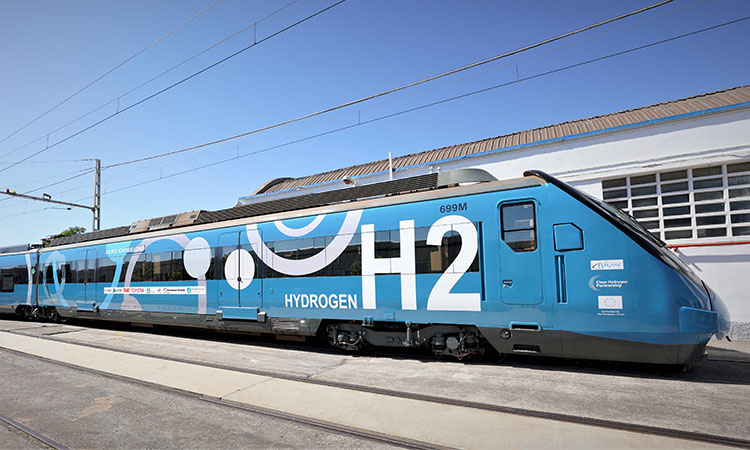 CAF have started dynamic track testing of a hydrogen-powered demonstrator train which is being developed for the FCH2RAIL project. FCH2RAIL is a consortium of companies including CAF, DLR, Toyota, Renfe, ADIF, CNH2, IP and Stemmann-Technik.

This demonstrator train is based on one of Renfe’s commuter trains, in which a new power generation system has been installed. This system, which utilises a hybridisation of energy from hydrogen fuel cells and batteries, has been integrated into the vehicle’s existing traction system. As a result, it will become one of the first bi-mode demonstrator trains with hydrogen fuel cells. In other words, a zero-emissions vehicle concept that will be able to run in electric mode on the electrified infrastructure, while the hybrid mode will be used for operating on catenary-free sections.

After successfully performing static testing, the train is now ready to start dynamic testing on an external track. With the start of these tests, the consortium will meet the original deadlines set for this phase of testing, demonstrating the consortium’s full commitment to the project.

During the dynamic tests, the hybridisation of the fuel cells and the batteries will be optimised on routes that have been specifically selected as being representative of those that would be used for commercial services, meaning that the new system will be fully tested by a wide range of different power demand conditions. As a result of these tests, the competitiveness of the new bi-mode hybrid propulsion solution can be evaluated against the diesel trains currently in use on many routes, within the framework of current plans to decarbonise rail transport.

The project has a €14 million budget, €10 million of which is being funded by the Clean Hydrogen Partnership, formerly FCH2 JU, a European Commission agency dedicated to promoting the development of hydrogen and fuel cells.

CAF is yet again confirming its commitment to the development of zero-emission mobility solutions, in this case through the use of hydrogen. This is a technology that the CAF Group has been marketing for some years now through its subsidiary, Solaris, the leader in the hydrogen bus market in the European Union for year 2021.