The request-stop kiosk on the Far North Line will be the first of eight to be rolled out across the Highland route and will allow passengers to access the next planned service electronically. 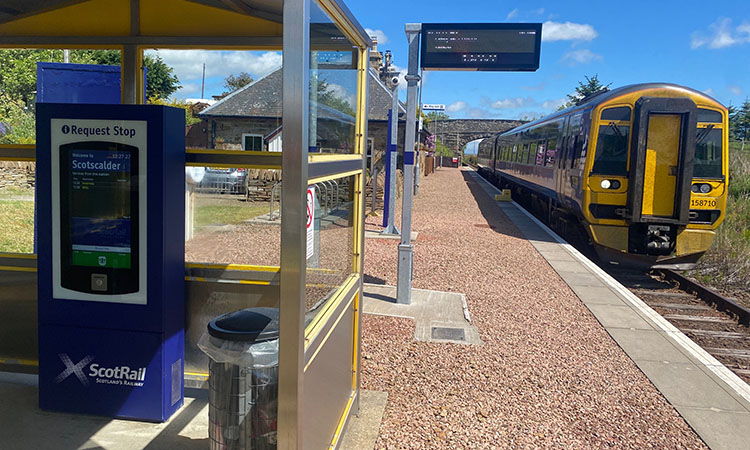 The first request-stop kiosk on the Far North Line will go on trial at Scotscalder station from 15 August 2022. The kiosk at Scotscalder, the first of eight that will be rolled out across the Highland route, will allow passengers to access the next planned service electronically and eliminate the need to hand-signal the driver to stop the train. 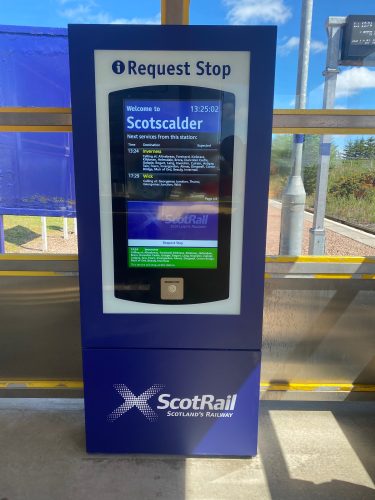 The installation is part of a broader £5 million package of investment in the line’s radio signalling system, with stations on the Far North Line benefiting from the addition of the request-stop kiosks on platforms. Subject to the trial being successful at Scotscalder, the new system will be rolled-out over the coming months at Altnabreac, Kinbrace, Kildonan, Dunrobin Castle, Rogart, Invershin and Culrain. Due to their geographical remoteness, patronage at these stations is amongst the lowest in the UK and consequently they operate on a ‘request to stop’ basis, currently requiring the need to hand-signal approaching trains to stop.

The new kiosks will enhance the current operation of the railway by allowing passengers to request an approaching train to stop at the station using a radio system to send a message to the driver’s cab requesting the train stop.

Scotscalder has been selected as a trial location which will be closely monitored to ensure safety and reliability. Information will also be available on platforms initially to highlight the change to passengers and a period of dual running will be in place to extensively test the enhanced system prior to it being rolled-out at the other locations. As well as the installation of the request-stop kiosks, Network Rail has upgraded existing radio communication masts and antennas and installed new equipment at Muir of Ord, Invergordon, Kildonan and Wick stations to enhance radio coverage. This has improved the reliability and resilience of the communications network across the route to improve overall passenger experience for those travelling on the line.

“Enhancing the radio network will make the experience of using request-stop stations more straight forward for local people and for the increasing number of tourists visiting the area,” Cara Healy, Development Manager for the work on the Far North Line at Network Rail, said. “Once the trial-period is complete at Scotscalder, we are confident that the system will be ready to be rolled out to improve performance and the overall passenger experience for those travelling on the railway. This new system will make it easier to use some of the most remote stations on our network and hopefully help encourage more people to travel into the Highlands to walk, climb, cycle and sightsee.”

“We are delighted to welcome request-stop kiosks on to the network with the improvements they will offer to our passengers using this rural line,” David Simpson, Service Delivery Director for ScotRail, said. “Enabling the driver to be alerted in advance to the need to stop in the station, rather than being reliant on hand-signalling, delivers a safer and more reliable system, and means that trains don’t need to slow down at stations where there are no passengers waiting. This will improve performance and it’s a really positive step for the operation of the route. We look forward to a successful trial and the technology being rolled out to other stations on the Far North Line.”