The signing of the Shadow Operator agreement with globally renowned railway sector companies is an important milestone in the Rail Baltica project. 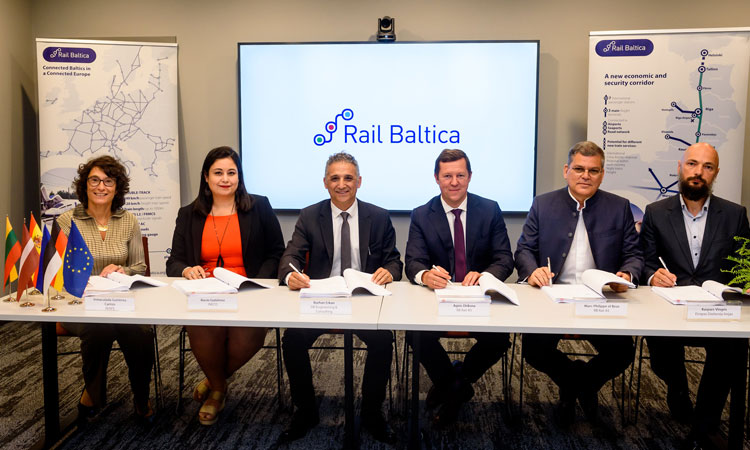 Shadow Operator services will be a long-haul consultancy contract for a period of six years with an opportunity to prolong the services and will remain in force until the inception of train operations on the Rail Baltica corridor. The total amount of the agreement is €8 million.

Marc-Philippe el Beze, Chief Technical Officer and Member of the Management Board at RB Rail AS, said: “This is a significant and strategic step towards ensuring Rail Baltica future operations according to the highest safety and interoperability standards. While work on defining the future infrastructure model is in the progress and final decisions still to be taken, outcomes of the Shadow Operator services will bring an optimal railway operation and maintenance model along with tailored Rail Baltica operational concept, various technical strategies, plans and work procedures to meet future infrastructure management, train operation and users’ needs.”

Burhan Erkan, Executive Director, Baltic States, DB Engineering & Consulting, said: “We are convinced that Rail Baltica is one of the most important and strategically relevant infrastructure projects in Europe, aimed at fostering cohesion and connection between the Baltics and the neighbouring countries of the European Union. The nature of the Shadow Operation is to oversee the requirements of the Rail Baltica users’ from all three Baltic States and beyond, and to provide solutions from the operator’s perspective.”

Anvar Salomets, CEO and Chairman of the Board of Rail Baltic Estonia, said: “Signing an agreement for shadow operation services with globally renowned railway sector companies is an important milestone to the Rail Baltica global project and our organisation, which provides a particular roadmap and competence for future operations of the railway. As Rail Baltic Estonia is in preparation for carrying out infrastructure manager tasks its crucial for ongoing transformation of the company.

Kaspars Vingris, Chairman of the Management Board at ‘Eiropas Dzelzceļa līnijas’, said: “Rail Baltica – a greenfield transport infrastructure and an economic corridor – requires a modern and optimum railway performance in operations phase. Together with our colleagues in Estonia and Lithuania we are currently in the process of developing Rail Baltica infrastructure management model to provide uniform interface for railway undertakings. We expect the Shadow Operator to support us and our colleagues to deliver recommendations that goes beyond current best practices for railway operations and maintenance. Furthermore, we are looking forward to the Shadow Operator’s expertise to contribute for setting up a service offer for our citizens and tourists at international and domestic public transport services, where the railway, notably Rail Baltica is the backbone. The first and the most important case for us is Riga Central Station which has the potential to become the largest multimodal passenger transport hub in the Baltic States, where the next level transport connectivity will be available for users enjoy already in few years’ time.”

The implementation of the Rail Baltica project is financed by the national states – Estonia, Latvia, and Lithuania – and co-funded from the European Union up to 85 per cent of the total eligible costs, in the framework of the Connecting Europe Facility (CEF) funding instrument.