RIA North have published a plan which sets out a long-term vision for how the railway network in the North of England should be electrified in order to decarbonise rail in the region.

The Railway Industry Association (RIA) North has published a new plan for how the railway network in the North of England should be electrified, to improve journeys and help decarbonise rail freight and passenger lines across the region.

RIA North’s plan, entitled ‘Greener, Faster, Better’, sets out a long-term vision for which passenger and freight routes should be prioritised for electrification, and other low carbon technologies such as battery and hydrogen, to remove polluting diesel trains from the network. Electric railways are one of the greenest modes of transport and enable trains to run faster and more services to operate.

Looking ahead to 2050, the report identifies strategic freight lines, intercity corridors and suburban networks across the North which should be top of the list to be electrified. According to RIA North, the Midland Main Line (MML) and TransPennine Route Upgrade (TRU) offer the greatest decarbonisation benefits, both of which the Government announced it will electrify as part of the Integrated Rail Plan.

It also highlights a range of connections between major towns and cities in the North as ‘first priority’, including: 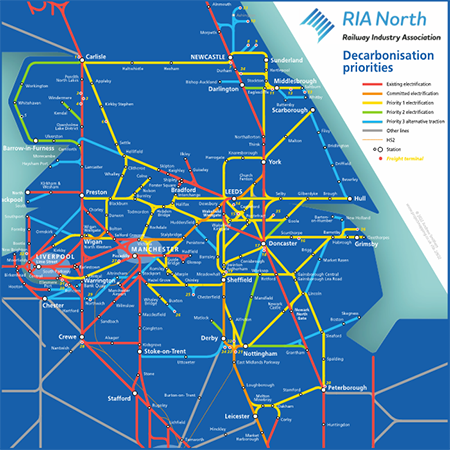 “Rail will be essential for the UK to reach its net zero transport targets, as a clean form of mass transit,” Justin Moss, Chair of RIA North, said. “However, many of the North’s major freight and passenger routes continue to rely on diesel trains and critical connections between some of our largest cities need major upgrades. Electrification is the solution to many of these challenges. That is why we have published a roadmap for how our railway network can be not only decarbonised through electrification, but also deliver faster journey times. We also identify where other decarbonisation solutions such as battery and hydrogen trains will be most appropriate.

“Whilst we have seen some progress with commitments from the Government in the Integrated Rail Plan, these do not go far or fast enough to reach our climate targets. To ensure they can be delivered at good value to the taxpayer the industry needs a long-term programme of electrification work starting immediately, which would also help support thousands of green jobs in the sector and drive economic growth around the country. We look forward to continuing working with Transport for the North and our partners in government to build a world-class, Net Zero railway not just for the North of England but for whole of the UK.”

“We know the North has ambitious targets for net zero emissions from transport by 2040, and the railway industry is eager to play its part in this,” Julie Carrier, Decarbonisation Lead at RIA North and co-author of the report, said. “Not only do we need to decarbonise our industry, but we need to increase the capacity of our railways to take even more passengers and freight through a pipeline of electrification projects. We hope that our proposals will help inform the debate about how the industry can deliver these, providing the greatest benefits to passengers and the North’s economy.”

The Electrification Route Prioritisation Plan was written by RIA North’s decarbonisation working group, made up of cross-industry experts, and forms part of their ongoing engagement with partners in the supply chain, Government, Transport for the North and Network Rail.