Webuild will continue its expansion in Romania with the new Lot 4 contract for the upgrading of the Caransebes-Timişoara-Arad railway.

Webuild has renewed its expansion in Romania with a new €441-million contract to upgrade and extend a section of the Caransebes-Timişoara-Arad railway known as Lot 4, all as part of a wider project to expand the Rhine-Danube Corridor of the Trans-European Transport Network (TEN-T). The contract comes shortly after the Group was awarded the €291 million contract for Lot 3, another section on the same railway. As a result, Webuild has reached €2 billion worth of new contracts and contracts in the phase of being finalised so far in 2022. The contracts are mainly financed with European Union funds. 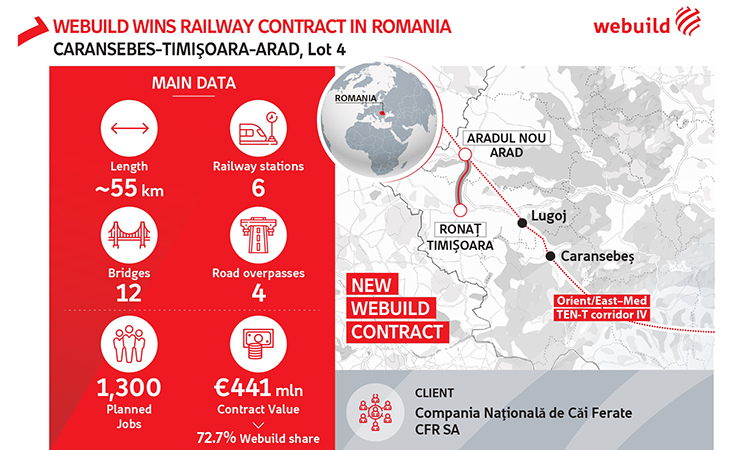 Webuild is leading the consortium that won the contract for Lot 4 with a 72.2 per cent stake. Its partner Salcef holds the other 27.3 per cent. Work on the section is expected to create 1,300 jobs, direct and indirect. Combined with Lot 3 contract, the total number of jobs reaches 1,900.

Commissioned by Compania Naţională de Căi Ferate CFR SA, Romania’s national railway company, on behalf of the Ministry of Transport and Infrastructure, the contract involves the design and execution of the modernisation of approximately 55 kilometres of railway between Ronat and Arad Nou in western Romania. It also includes the construction of a bridge 635 metres long with a central span of 180 metres over the Mures River, as well as a series of 11 other bridges, four highway overpasses and six stations.

Financed by the Operational Programme for Large Infrastructure (POIM) for Romania, the entire project will help increase train speed and capacity along the Caransebes-Timişoara-Arad railway between Bucharest and Timişoara. Passenger trains will travel at speeds of up to 160 kilometres per hour, while those for cargo up to 120 kilometres per hour. 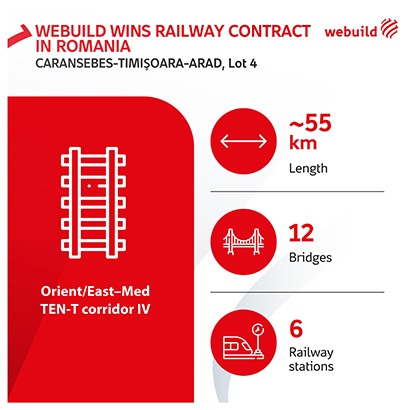 Lot 4 is the latest in a series of contracts recently obtained by Webuild in Romania. Other Webuild contracts in Romania include a railway section between Cluj-Napoca and Episcopia Bihor, Lots 3 and 5 of the Sibiu-Pitesti highway (the first to cross the Carpathian Mountains) and the upgrading of 120 kilometres of railway between Frontieră, Curtici and Simeria, a project split into three lots that involves the construction of bridges, viaducts, and the renovation of stations. Another project is the construction of the Braila Bridge over the Danube River. At 1,975 metres with a central span of 1,120 metres, it will be the second longest suspension bridge in continental Europe.