The station openings mean that Brightline now has five stations in South Florida and will connect travellers to existing stations in Miami, Fort Lauderdale and West Palm Beach. 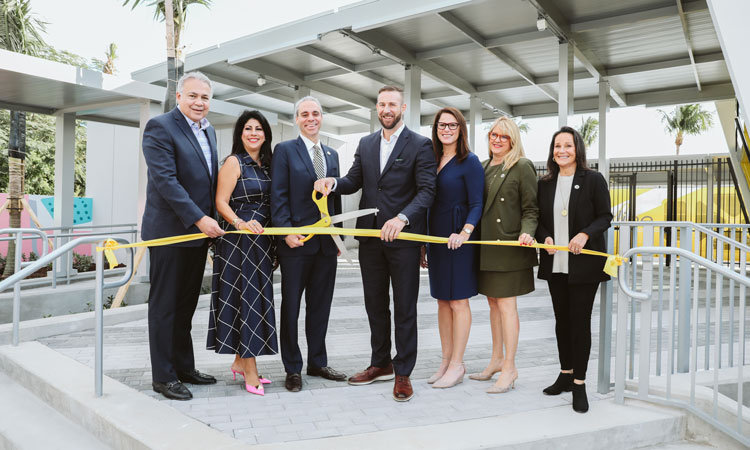 Brightline, the only provider of modern, eco-friendly, intercity rail in America, along with its partners in Boca Raton, Aventura and Miami-Dade County, have celebrated the opening of its Aventura and Boca Raton train stations.

On 20 December 2022, Congressman Carlos Gimenez and Mayors Daniella Levine Cava, Scott Singer and Howard S. Weinberg were joined by officials from the City of Boca, the City of Aventura, Miami-Dade County and Brightline executives to officially launch the station openings, and the first day of service for Boca Raton and Aventura was 21 December 2022.

With the station openings of Aventura and Boca Raton, Brightline now has five stations in South Florida and will connect travelers to existing stations in Miami, Fort Lauderdale and West Palm Beach. Both stations feature Brightline’s signature autonomous MRKT, SMART and PREMIUM lounges in addition to touchless turnstiles and free high-speed Wi-Fi throughout the station and on-board trains.

The Aventura station will allow guests congestion-free travel between all of Brightline’s stations with an estimated travel time to MiamiCentral of about 20 minutes. The station will also offer express service between Miami during the peak morning and evening hour commute periods, saving time and stress for commuters.

The Aventura station will allow guests congestion-free travel between all of Brightline’s stations with an estimated travel time to MiamiCentral of about 20 minutes.

The 34,000 square foot station features 240 parking spaces, a bus drop-off for Miami-Dade Transit passengers, newly landscaped and hardscape areas and a pedestrian skybridge that transports guests from the vertical transportation towers to the train platform. Brightline is currently designing a new pedestrian bridge which will connect the platform to the Aventura Mall. Upon the station’s opening, Brightline will provide a complimentary bi-directional Brightline+ shuttle to Aventura Mall for guests. The shuttle will be available 14 hours of the day.

The Aventura station has been designed to LEED (Leadership in Energy & Environmental Design) Silver criteria as part of Brightline’s goals to reduce contribution to global climate change, enhance individual human health and protect water resources. These LEED Silver station design features include a solar canopy and installation of electric charging vehicles to reduce emissions and encourage clean transportation, a careful selection of materials to increase healthy indoor spaces and smart technology to reduce water use.

Brightline’s 22,000 square foot Boca Raton station features a 455-space parking garage which will service Brightline’s guests and visitors to the library, who will have dedicated, covered, and complimentary spaces on the first floor. The station will also provide two complimentary, on-demand Brightline+ EV carts to destinations within downtown Boca Raton. Travel between Boca and MiamiCentral will be approximately 60 minutes. Partners in this project include the City of Boca Raton and Federal Railroad Administration (FRA) that awarded Brightline and Boca $16.4 million for construction of the station.

“Brightline is on a mission to build a better way to get there,” said Patrick Goddard, President at Brightline. “We’re connecting the state and economies making it easier to do business while expanding your backyard in so many ways. Opening our stations in Aventura and Boca Raton is a community-wide effort that will alleviate congestion and regionalize South Florida. Thanks to our amazing partners who made this vision possible.”

FRA Administrator, Amit Bose, said: “The Federal Railroad Administration is proud to provide federal funding for the construction of this new passenger rail station in the City of Boca Raton, helping local communities access high-quality passenger rail as a transportation option, improving and expanding America’s rail network will connect economies in new ways while getting people where they need to be conveniently, reliably, and safely. Thanks to President Biden’s infrastructure investments, we can deliver these benefits to more Floridians and Americans across the country.”