Hitachi Rail Europe and Abellio have announced a joint contract has been signed for the provision and maintenance of 70 new trains for the upcoming ScotRail franchise. The trains are financed by Caledonian Rail Leasing. 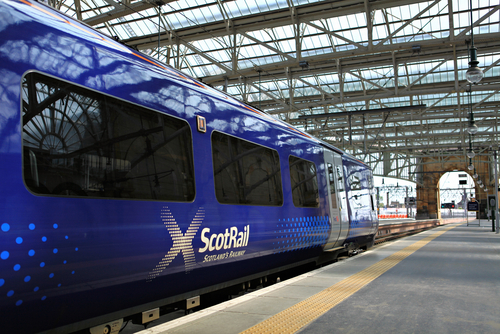 The service will operate along the Edinburgh-Glasgow and Stirling – Alloa –Dunblane lines. 46 three-car and 24 four-car AT200 EMU trains are being acquired and will go into service in late 2017. A 10-year maintenance deal to service trains at depots in Edinburgh is also included in the contract.

The first seven trains are scheduled to be built in Hitachi’s Kasado factory in Japan, with the remaining 63 being built in their flagship Newton Aycliffe train manufacturing facility in the UK, opening later this year.

The AT200 model has a 35-year design life, each car is 23 metres in length, has a top speed of 100 miles per hour and features cab-end and inter-vehicle gangways to facilitate the best use of passenger space.

Scottish Transport Minister, Derek Mackay responds to today’s announcement: “With the new ScotRail franchise, a number of impressive infrastructure projects and these slick new trains, we are giving Scotland a railway to be proud of.

“Passengers will love using these new trains, but the benefits go far beyond that. The use of electric trains on Scotland’s busiest route will help reduce our carbon footprint. The improved connection can only be good for our two biggest cities. And the innovative contract has reduced the cost of the finance, as well as guaranteeing a great deal for Scotland in the longer term.”

Jeff Hoogesteger, Chief Executive of Abellio said: “This is an important deal for passengers and for Scotland. New trains for Scotland were a key feature in Abellio’s bid for the franchise and we are excited to be pressing the button on the delivery programme. The arrival of 24 Hitachi AT200s by late 2017 and a further 46 by Dec 2018 will ensure that the full benefits of the Edinburgh Glasgow Improvement Programme are realised for passengers; delivering faster journey times, greater capacity and higher service quality.”

Jon Veitch, Hitachi Rail Europe’s General Manager for Scotland also commented: “We are delighted to be signing this contract with Abellio today, which will see the supply of rolling stock and maintenance services for their new ScotRail franchise. This forms the start of a long-term partnership to boost passenger services in Scotland, and we will be working closely with the operator to ensure that services are kept to a very high standard across this period.

“This is also the first contract for our recently launched AT200 commuter train. With the majority of manufacturing taking place in our Newton Aycliffe factory, this is another sign of our confidence in UK manufacturing and, in line with the delivery of our Class 800 IEP trains, will boost jobs and growth in Scotland and the North East of England.”