With the commissioning of the Bettembourg – Thionville – Uckange border section and the Mont Saint-Martin – Aubange – Rodange triangle, an important step in the deployment of ETCS on the Antwerp – Basel section of Rail Freight Corridor (RFC) North Sea – Mediterranean has been achieved. 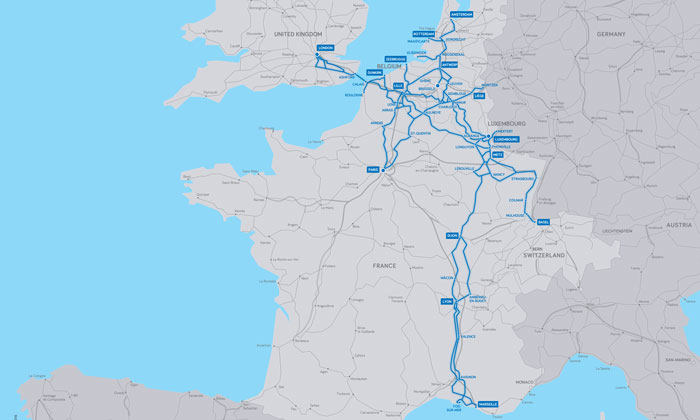 Both sides of the border on the Bettembourg – Thionville – Uckange section was simultaneously put in service by CFL Infrastructure and SNCF Réseau.

Since the annual service started in December 2016, commercial passenger trains have been running daily on this section, exclusively in ETCS, though this is also available for freight trains whose locomotives are appropriately equipped and authorised.

The border section of Aubange (BE) – Rodange (LUX) became operational in December 2016 and the complete commissioning of the Mont Saint-Martin – Aubange – Rodange triangle between Belgium, Luxembourg and France followed in March 2017.

The implementation of ETCS on these border points represents an important symbolic step in the deployment of the European control and command system on the Antwerp-Basel route (one of the main axes of Rail Freight Corridor North Sea – Mediterranean) and was made possible thanks to co-financing by the European Commission.

On the route of Antwerp-Basel, ERTMS is already in service on the main sections in Belgium and Luxembourg, and deployment works are under way on the French side and in Belgium.

This step, initiated in 2007 with the creation of the ERTMS Corridor C (which has since become part of the Rail Freight Corridor North Sea – Mediterranean), is essential for the establishment of an interoperable European network.

With the equipment of border points in ERTMS, the main objective is to ensure the interoperability of the train control system. The long-term plan is that locomotives equipped and duly authorised will be able to use only one signalling system.

The completion of the whole route is planned for December 2020, and it will be the first fully equipped ERTMS route between four countries in Europe.