The Government, Midlands Connect & East Midlands Councils agree the maximisation of HS2 benefits and improvement of services on the Midland Main Line to be a priority… 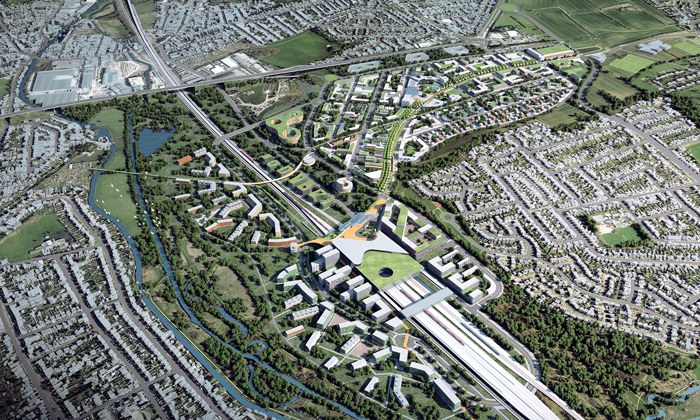 A commitment to work together to achieve key outcomes was made between the Secretary of State for Transport, Chris Grayling and representatives of Midlands Connect and East Midlands Councils in Nottingham.

For the first time, all parties have agreed to work towards partially opening the East Midlands Hub station at Toton in the 2020s. It has not be confirmed whether this will be for Network Rail services or to stimulate the development of the planned Innovation Campus, which has the potential to create 10,000 new jobs.

To support the early phases of the Innovation Campus, early delivery of road infrastructure around the East Midlands Hub station will occur as well as the relocation of the Network Rail and DB Cargo depot in Toton which will move to a different site.

“We have said for a long time that more investment in transport and infrastructure in the East Midlands can have a transformative impact on its economy and the quality of life of the millions of people who live here,” said Sir John Peace, Midlands Connect Chairman. “I’m therefore pleased that the Government is already in dialogue with the Midlands Connect team and East Midlands Councils to accelerate connectivity around the HS2 Hub station at Toton.”

The authorities also agreed to establish an East Midlands ‘delivery body’ to realise the potential of the Innovation Campus and associated Garden Village housing developments.

In addition, Midlands Connect and East Midlands Councils will continue to press the Department for Transport to ensure a link between the Midland Main Line and HS2 Phase 2b is operational for the start of HS2; enabling classic compatible trains to serve the north of England from the East Midlands. This would benefit Leicester in particular, which is currently poorly served by direct services to the north.

“HS2 will become the backbone of our national rail network – supporting growth and regeneration, bringing passengers faster journey times and delivering an estimated 74,000 jobs; adding nearly £4 billion to the East Midlands economy by 2043,” said Chris Grayling, Secretary of State for Transport. “I welcome the ambitious growth strategy put forward by the East Midlands leaders to maximise the benefits of HS2 through the development of an Innovation Campus, garden settlements and better connections at Toton. We have also invested £25 million to help Midlands Connect develop a transformational transport strategy, and will work with them on their proposals.”

All parties have agreed to work together to improve services on the Midland Main Line following the decision not to electrify the line between Kettering and Sheffield.