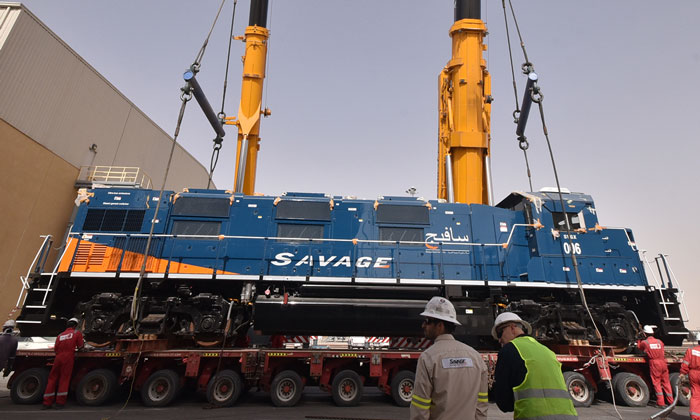 Savage will be responsible for the operation and maintenance of the two Tier-3 compliant, low-emissions locomotives delivered to Saudi Aramco’s Wasit and Berri Gas Plants in the Jubail area. The other five locomotives (GP38-3) and two booster units were distributed to MWSPC’s new mining and processing plants in Wa’ad Al-Shamal Industrial City and Ras Al Khair Industrial City.

The vehicles, and corresponding booster units, were imported by ship from Houston, Texas to the Port of Dammam, Saudi Arabia and transported by tractor-trailers to their final destinations.

Savage has agreed to provide rail switching, track maintenance and track signalling system operations and maintenance for Saudi Aramco at its Wasit and Berri Gas Plants. These services will help facilitate the transportation of molten sulphur by rail to MWSPC’s facilities for the production of phosphate fertilisers.

Savage is also going to provide locomotive operations and maintenance training, to ease the handover to MWSPC, who owns and operates the units.

“The delivery of these locomotives highlights the continued emphasis the Kingdom of Saudi Arabia is placing on the development of railroad infrastructure and diversification of industry,” said Troy Savage, Senior Vice President and Executive Manager for Savage Saudi Arabia. “We’re pleased to operate one of the first industrial rail switching facilities in Saudi Arabia and are committed to providing excellent service for our customers.”