The International Rail Development conference took place on 22-23 May in Brussels and brought together attendees from all corners of the rail sector to discuss some of the biggest developments currently impacting the industry. 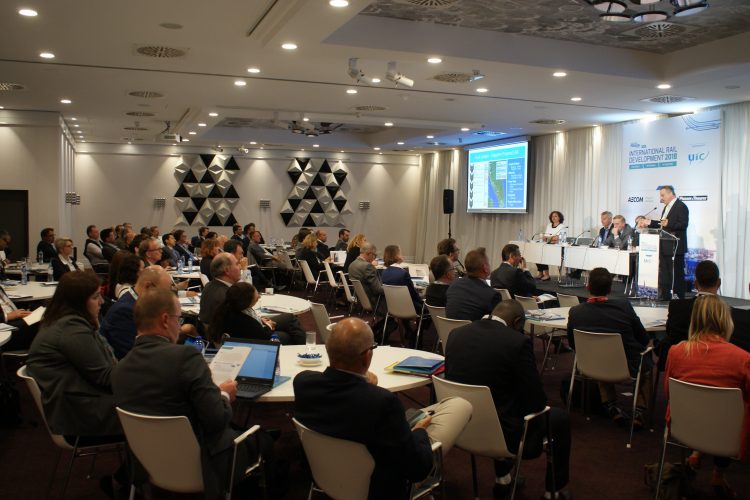 From large-scale infrastructure projects, to technological developments and even developing ties within the sector itself, the conference explored various aspects of how rail is developing today and in what ways these developments will impact the future. In fact, the day began with an opening panel to discuss that very topic: What is the future of rail? So, did we answer that question? Here are five things we learned at the International Rail Development conference…

1. Multi-modality
A key element at the International Rail Development conference when discussing future rail developments was the industry’s need to focus on multi-modal travel to ensure rail is a viable and efficient mode of the transport today and in the future. As Jean-Pierre Loubinoux, Director General of the International Union of Railways (UIC) said during the opening plenary: “The word ‘intermodality’ has become opti-modality [and] today we’re even talking about modal integration.

“Rail is interoperability, or the integration of modes between regions, countries and continents. This means long distances and international links. [For the rail sector to develop further] all modes with have to adjust quicker and together.”

2. Digitalisation
There were several sessions within the conference that focused on digitalisation and its importance in developing the railway sector to be more sustainable and efficient. From smart assets and artificial intelligence to digitalised CCTV and even using 3D printing to make parts, digitalisation is fundamental in the future of transport.

“Digital is the big buzzword,” Simon Fletcher said during his closing speech. “The future is digital [and] data is rich. People like to say that ‘data is the new oil’, but we have to harness this together.”

3. Financing
With the World Bank attending the conference, financing was a key issue, with Martha Lawrence from the World Bank discussing the topic from its basics – “financing is not free money. It’s important that investments [that are] made are profitable enough that they can pay for themselves over time” – to taking this further and exploring methods on how to get financing: “The key to accessing [various] sources of financing is to be credit-worthy.”

Financing is a fundamental element when discussing the future of rail, as largescale rail projects require a high level of investment, with a very long-term return on these investments. It is a topic that is rarely discussed within rail events and it was clear that this is something that needs to be explored further in the future.

4. Connections
The topic of ‘connecting’ was explored on multiple levels throughout the conference; from the fundamental idea of rail connecting areas and countries, to actually connecting together as an industry. “Our main objective is to break down the barriers that still exist amongst EU member states to create a unifi ed single railway market,” said Elisabeth Werner, Director Land Transport, Directorate General Mobility & Transport at the European Commission. “[The EU’s] rail networks are growing worldwide, and that’s why connectivity, making sure the European network is linked into this, is very important. We want to ensure the European networks are linking effectively into international routes.”

The idea of connection was also explored with the ideas of rail alliances and the need for the industry to work together to create large-scale rail projects and explore new technologies to ensure the industry develops further.

5. Learning
The idea of connecting as an industry also brought together the idea of the industry learning from each other to become more efficient. This is especially relevant when it comes to new innovations and ideas.

As Simon Fletcher concluded in his closing speech: “It’s quite clear we cannot [develop] in splendid isolation, each in our own little areas or worlds… we must be efficient, and we’ve talked about efficiency drives. We must maximise opportunities and above all be smart. We need to be clever. The future is bright. The future is rail as a system and it can only be run as a system if it’s going to be efficient.”

DAC: Ensuring rail freight can play the role it deserves in Europe