An award of $22.6 million will build on BNSF’s existing investments in sustainable technologies, which include Tier 4 locomotives and idle control. 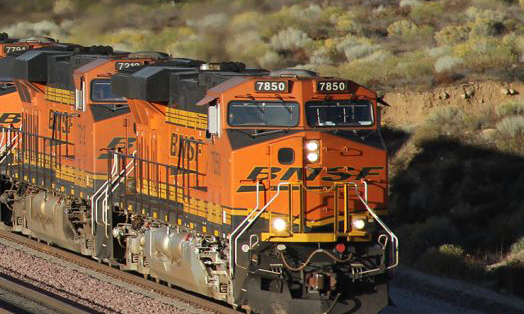 The grant will be used to pilot several emission-reducing technologies in and around railyards and BNSF will collaborate with various industry partners to test the feasibility of these technologies.

“BNSF is focused on reducing our environmental impact and we’re committed to doing our part to test and prove the commercial viability of emerging technologies that reduce emissions,” said John Lovenburg, Vice President, Environmental.

As part of the project, BNSF will partner with GE Transportation on a battery-electric locomotive that will be paired with diesel locomotives to power a freight train travelling from Stockton to Barstow.

The all battery-electric locomotive will be developed to validate the technology’s operational benefits and growth potential in the rail freight industry. An AC Evolution Series locomotive will be designed and built, featuring an overall energy-management system, including on-board energy storage, which coupled with advanced system-optimisation controls will improve performance. This battery-electric locomotive will generate 2,400 kilowatt-hours of power and could potentially reduce a freight train’s total fuel consumption by at least 10 to 15 per cent.

“Battery-powered or hybrid locomotives are promising technologies for the rail industry with the potential to reduce operating costs and emissions,” said Dominique Malenfant, Vice President, Global Technology, GE Transportation. “This project will give us tremendous insight into the capabilities of battery power and the best operational methods of leveraging the technology. It will accelerate the development of this cleaner, more efficient solution for the rail freight industry.”

In addition, two hybrid rubber-tire gantry cranes from Mi-Jack will be piloted, which in comparison to their diesel counterparts, have the ability to reduce emissions by 70 per cent.

The equipment will be manufactured in 2019 and deployed in 2020. The grant will cover approximately half the cost of what is estimated to be a $45 million project and the remaining amount will be funded by BNSF and the other corporate partners.