The annual report covers the Authority’s sustainability activities from 1 January to 31 December 2018, and details the contributions of the California high-speed rail project toward the State of California’s social equity, environmental and economic development objectives. 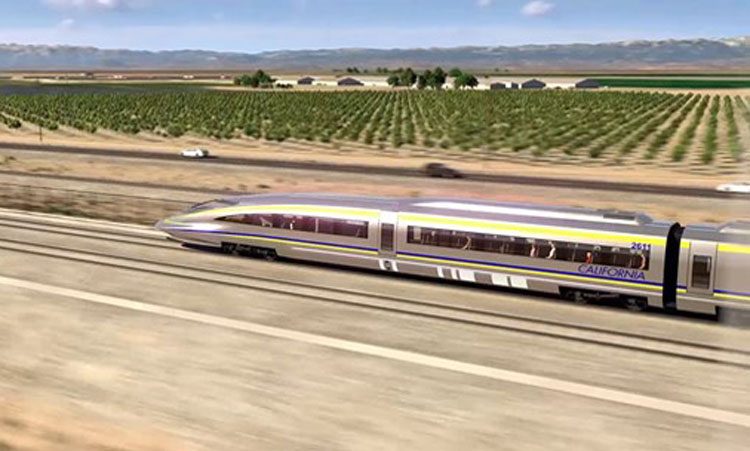 Conceptual rendering of a typical high-speed rail segment in the Central Valley near Corcoran. Credit: hsr.ca.gov

California’s high-speed rail project received five stars and is one of the top ranked sustainable rail infrastructure projects in North America, as evaluated by the GRESB Infrastructure Assessment – the leading benchmark for environmental, social and governance policies, practices, and performance of real estate and infrastructure investments around the world.

The Authority’s Chief Executive Officer, Brian Kelly, said: “As our 2019 Sustainability Report makes clear, the Authority is committed to sustainable mobility, sustainable economic growth, and sustainable construction and operation practices. From expanding job creation to cleaning the air, respecting natural resources and transforming communities to reduce sprawl, we demonstrate our commitment to sustainability every day in every way.”

The investments the Authority is making are vital for California’s goals addressing climate change and developing clean energy while transitioning to a low-carbon economy. The Authority is contributing funding to regional and local rail systems in Northern and Southern California to give people a reason to forgo their cars, including:

The 2019 report, which was developed in accordance with the Global Reporting Initiative (GRI) Standards Core Option – the world’s leading and most widely adopted sustainability reporting framework – lists several additional sustainability milestones from 2018, including:

GRESB Infrastructure Director, Rick Walters, said: “It is great to see California’s High-Speed Rail Authority continuing to report to GRESB to benchmark its performance against similar infrastructure projects and assets, and against the entire GRESB dataset annually. This ongoing commitment to sustainability is affirmed further this year by California’s project moving back up into the top quintile and therefore receiving a five-star rating. The Authority’s track record on sustainability, as measured by GRESB, will surely position the asset well when it comes to attracting private sector investment in the future.”

Mary D. Nichols, California Air Resources Board Chair, said: “California’s high-speed rail has been planned carefully, and it is now a model for sustainable infrastructure practices, from ensuring only clean construction equipment to requiring the use of renewable energy.”