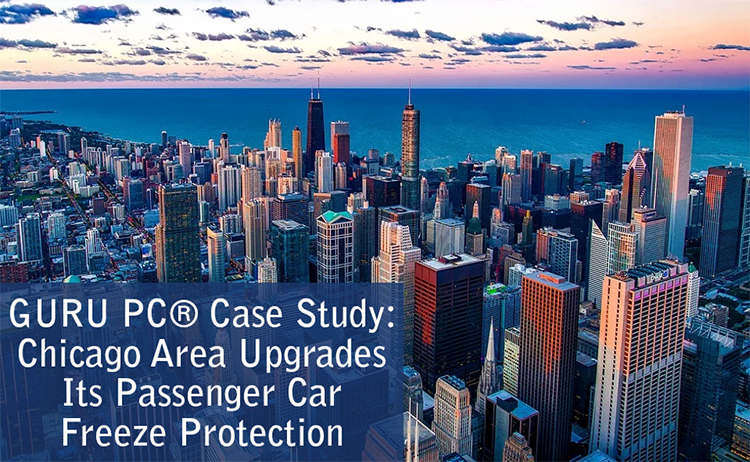 Located on the eastern side of the windy city, a Chicago area commuter regional rail operator has an operating range that stretches from the Chicago collar counties up into Kenosha, Wisconsin. With more than 780 passenger cars in their fleet, the company’s trains provide daily transportation for thousands of commuters.

Given their operating range, the rail operator is no stranger to freezing temperatures and is mindful of the need to protect their passenger cars’ potable water-bearing systems from freezing during the cold winter months. Typically supplying on-board toilets and kitchens, these water-bearing systems can quickly freeze when the car heat is turned off, bursting pipes and storage tanks. This can lead to expensive, lengthy repairs and significant downtime. A project manager at the company commented that while they had used freeze protection devices on their passenger cars in the past, they performed poorly. Due to this, they made the decision to switch to the GURU PC® thermostatic freeze protection valve in 2018.

During normal operation, a passenger car’s heating keeps the water in the system warm, but when the heat is turned off during a layover or when the car is put in storage, the temperature inside of the cabin can quickly fall towards freezing. If the water in the system is not heated or drained, it could freeze and cause significant damage. “The GURU PC® is installed at the lowest point in the car’s water-bearing system inside of the cabin,” explained Dana Logue, ThermOmegaTech®’s Railroad Product Manager. “Its internal thermostatic component continuously senses the ambient temperature, and when the temperature falls to the valve’s set-point of 35°F, it will automatically open and drain the system before it freezes, effectively preventing thousands of dollars in damage.” Once the passenger car’s heating is restored, the valve’s electronic heater assembly quickly reheats the valve, allowing it to modulate closed so that the storage tank may be refilled with cold water and the car promptly returned to service.

Utilising the same thermostatic temperature control technology as the GURU® Plug for locomotives, the GURU PC® operates 100 per cent mechanically and does not require a source of electricity to drain the system. The GURU PC® is offered in ¾” and 1” NPT sizes, both of which have a high flow design for rapid draining. We recommend purchasing our electric heater assembly, which is offered as 120VAC/74VDC or 230 VAC, with the valve to shorten refill and startup times after a valve activation. 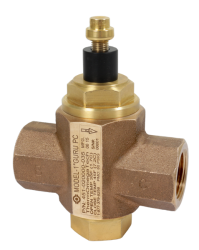 After testing a preliminary unit for more than a year, the regional rail operator installed 186 1” GURU PC®’s with heater assemblies in mid-2019 and the project manager commented that since the installation there have been no freeze-ups. The operator plans on implementing another 186 GURU PC® valves in 2020, and when asked if they would recommend the valve to other commuter train operators, they commented “yes!”

NSF 61 Certified and shock and vibration tested, the GURU PC® is compact, reliable, and in-line serviceable for ease of maintenance. This winter and every other, trust the thermostatic GURU PC® freeze valve to protect your investments from freezing temperatures.